50%
Tweet
Data-driven management is all the rage in World Cup soccer, baseball, and business. But where does that leave intuition and experience?

The World Cup starts this week, and beyond the drama of the games themselves, another drama will be playing out on the sidelines: data-driven decision making versus management by experience. This isn't a battle reserved for sports. It is going on at the enterprise level, as well. With big data sets becoming increasingly common, more managers are forced to decide if they're going to respond to or ignore the data.

Sports is an excellent microcosm for this kind of decision making. It is made up of discrete decisions whose outcomes are known relatively fast. If I try to blitz in this situation, is it more or less effective? Should I start this player or another player? Every decision can be mapped back to decisions made in similar situations across hundreds of games and parsed to the most minute detail.

It's more difficult in business, because it often takes months or years to determine the outcome of a decision, and there is much more "noise" in the signal. In soccer, for example, it is easy to use data to decide that, if Player A scores 40 goals against poor competition, he may not be as good as Player B, who scores 20 against the best teams in the world. In business, you need to account for variables such as economic conditions, marketing, competition, unforeseeable circumstances (including major weather events or political instability), and countless other factors. 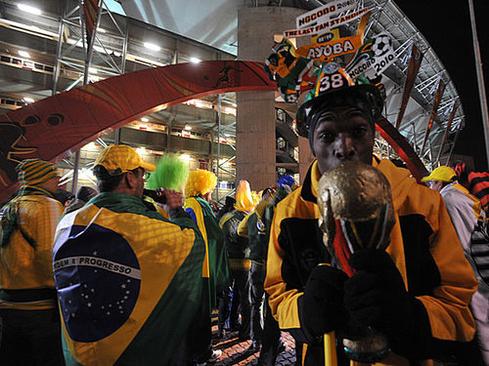 So the drama playing out here is objective data-driven decision making versus experience and intuition. Or, to put it more simply: robot vs. human. Or even John Henry versus the steam-powered hammer. Is there a definitive answer? You'll probably be surprised by what I suggest.

SAP is helping the German World Cup team by providing them real-time data based on video analysis from cameras placed on the field. Many soccer teams, and even sports pages, are using heat maps to analyze the movement of players around the field. With video, heat maps, and other analytics, teams can gain advantages and help players reach their potential. How much? In one case, enough to win a championship.

Not so fast. Manchester City is no stranger to success. The previous year, the team came in third in the league and won England's most prestigious tournament, the FA Cup. It has a very rich ownership that has pumped millions into the team to buy the best players in the world. How much more, exactly, did the decision to use inswinging corner kicks affect the team's success?

Consider the famous Moneyball story, where celebrated Oakland Athletics GM Billy Beane got a team with a small payroll to the brink of the World Series before losing. Beane famously said, "My [expletive] doesn't work in the playoffs." Why not?

For one thing, consider that, regardless of how they use analytics, some teams are using a different advantage (in this case, money) to succeed. For another, remember that the playoffs are a selection of the best teams. It stops mattering how the teams get there. In fact, the whole Beane quote, which is often not used, says, "My [expletive] doesn't work in the playoffs. My job is to get us to the playoffs. What happens after that is [expletive] luck."

What Beane is really saying is there is noise in the signal. A more sophisticated way of saying it comes from Nate Silver, famed political and sports analyst from FiveThrityEight.com, when he says of big data, "Most of the data is just noise, as most of the universe is filled with empty space."

Silver simultaneously destroys and defends big data with a single stroke. Sure, most data is garbage, but the best data is a star (literally and figuratively, in the case of this quote). The right decision based on the right data is a competitive advantage. And that's what CIOs and IT pros want to do -- serve the right data for the decision to be made.

But here's where it gets tricky. The difference between sports and business is the difficulty we have in picking the right data. In sports, you've got hundreds of test beds, essentially sand boxes where other managers made decisions you can test against. There are two ways to get good datasets to managers in business settings. The first way is essentially intuitive management and then going back and justifying the data you used after a success. The second is stripping out as much data as possible to make it easier to understand. And that winnowing is going to be done mostly by intuition, so we're back to square one.

So am I telling you to ignore data and go with your gut? No, I'm not doing that either. Clearly, there are sports teams (The Oakland As and Manchester City, to name two) that use analytics to gain an advantage. In fact, I'd go so far to say analytics are now table stakes in sports and business.

I'm saying that, to make a good data-driven decisions, you need good data, and good data is found, not in its bigness, but in its rightness. And that's going to take your intuition, whether you like it or not, to figure out what's good and what's bad. The idea of the dispassionate, objective, data-driven manager is not going to work. The robot still can't outthink the manager.

But at the same time, you can't assume your intuition is enough. The best managers figure out the data they need to make a great decision by intuition and business experience. But then, they let that data help them make the decision. Bad managers make a decision and then find the data that confirms what they were thinking. The difference is profound, and it is going to help some manager win the World Cup and another manager drive a company to success.

So, speaking of that World Cup, who do you think will win? Who are you cheering for? Silver is picking Brazil. I'm calling Germany for the Cup, but I'm pulling for the US and Italy (long story I'll share in the comments).

And what do you think about data-driven management? How do you pick the right data? Can you? Can analytics replace management? Are you data first or intuition first? Comment below.

David has been writing on business and technology for over 10 years and was most recently Managing Editor at Enterpriseefficiency.com. Before that he was an Assistant Editor at MIT Sloan Management Review, where he covered a wide range of business topics including IT, ... View Full Bio
We welcome your comments on this topic on our social media channels, or [contact us directly] with questions about the site.
Comment  |
Email This  |
Print  |
RSS
More Insights
Webcasts
Building a Strategy for Detection and Response
5 Steps to Integrate SAST into the DevSecOps Pipeline
More Webcasts
White Papers
Cybersecurity Research: 2019 AWS Cloud Security Report
Securing Real-Time Communications for Dummies Book
More White Papers
Reports
Cyber AI: An Immune System for Email
Black Hat 2019 Hacker Survey Report
More Reports

@StaceyE for me learning never ends one way or other... as we all have a story...
Reply  |  Post Message  |  Messages List  |  Start a Board

@StaceyE yes, as in Canada Cable and SATELITE Co. fighting Netflix via gov... as people making smart choice dropping Cable and SATELITE only staying with internet and Netflix... plus price of the devices going down... few days ago walmart.ca was selling Roku SS for $11 Can...
Reply  |  Post Message  |  Messages List  |  Start a Board

I agree, everyone we meet has an interesting story. We could really learn a lot from different people if we just take the time to get to know about them.
Reply  |  Post Message  |  Messages List  |  Start a Board

Another reason less people watch television is the internet. It is much easier for a busy person to read or watch the news online than to wait for the news to come on TV. Also, with products like Netflix and Hulu you can keep up on the latest TV shows without ever turning on your tv.
Reply  |  Post Message  |  Messages List  |  Start a Board

@StaceyE: In many ways soccer and baseball are similar in that there is a lot of dull time with some occasional bursts of real excitement. Those are the moments the afficianados wait for. The NFL used to be good but I cannot watch it anymore because of all the cutaways, replays and commercials. You really don't see the game properly unless you are at the stadium.
Reply  |  Post Message  |  Messages List  |  Start a Board

most people in the trade indst. have interesting live... it just we never ask... as for me each human is like interesting book... how I see it...
Reply  |  Post Message  |  Messages List  |  Start a Board