SEARCH
A minimum of 3 characters are required to be typed in the search bar in order to perform a search.
Announcements
Alert
Got some free time? Grow your knowledge from the comfort of your computer for FREE!
Alert
Are you looking to stay on top of IT trends? Check out our FREE webinars and virtual events!
Alert
Planning for 2023? Be sure to check out our upcoming in-person events!
Report
How does your salary stack up? 2022 IT Salary Survey Results Revealed
PreviousNext
Strategic CIO
4 MIN READ
News

IT uses data visualization to focus on exceptions, so it can replicate successes and head off flops. One in a series of profiles of InformationWeek 500 innovators.
Doug Henschen
Executive Editor, Enterprise Apps
September 07, 2011
Don't despair if you hear some analytics buzzwords in this description of two recent projects at Procter & Gamble, because in this case, they're not heralding unrealistic aspirations. P&G's projects related to analytics and data visualization are changing how the consumer goods company operates and the day-to-day conversations its executives have about performance.

The first project, launched 18 months ago, is the Business Sufficiency program, which gives executives predictions about P&G market share and other performance stats six to 12 months into the future. At its core is a series of analytic models designed to reveal what's happening in the business now, why it's happening, and what actions P&G can take.

The "what" models focus on data such as shipments, sales, and market share. The "why" models highlight sales data down to the country, territory, product line, and store levels, as well as drivers such as advertising and consumer consumption, factoring in region- and country-specific economic data. The "actions" analyses look at levers P&G can pull, such as pricing, advertising, and product mix, and provide estimates on what they deliver.

All these models have three things in common. First, they focus on exceptions--what's doing better and worse than expected, so P&G executives can learn what's working and copy it, while heading off the flops. Second, the models are all predictive, built on SAS analytics software and delivered through dashboards, charts, and supplemental analytics served up through Tibco Spotfire data visualization and analysis software. The predictions are continually refined toward the end of each quarter. Third, they show a range of possible outcomes, allowing for what-if scenario planning

P&G didn't just fall in love with data; it has collected data from its core SAP ERP and other applications for years, faithfully putting it in SAP BW and Oracle data warehouses (the latter now transitioning to Oracle Exadata). But before the Business Sufficiency program, all that work led to reporting silos that were hard to correlate. Individual country and product line managers could see their performance, but cross-company comparisons required labor-intensive data manipulation and analysis.

P&G CEO Bob McDonald has staked out a mission to "digitize" the company's processes from end to end, and Business Sufficiency is one way CIO Filippo Passerini and his team are delivering on that agenda. "The key business benefit is the speed of decision making," says Guy Peri, head of the business analytics unit. Decisions that used to require up to a month of data gathering and research can now be made within a day. 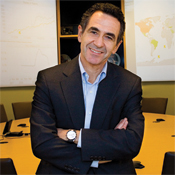 CIO Passerini in the Business Sphere

Immersed In The Data

As the Business Sufficiency models started spitting out rich data visualizations, P&G's IT team realized something was missing. "We thought, 'Wouldn't it be great if we could give our lead teams all the data they need to make decisions during meetings,'" says Pat Kern, director of business intelligence.

So the IT team broke out a shoe box. With all the sophistication of a third-grade diorama, they mocked up their vision for Business Sphere. It's now a real meeting room with a football-shaped conference table at its center surrounded by two 30-foot-wide projection screens. Six different dashboard and data visualization views can be projected across the screens, and at each end of the room are smaller displays that let executives in far-flung locations join meetings via video. Remote executives can see the same data visualizations displayed in the meeting room from their laptops or iPads. P&G is trying to patent the Business Sphere concept.

P&G's Monday morning executive meetings using Business Sphere follow a similar pattern. CEO McDonald, vice chairman of global operations Werner Geissler, and other execs review the state of the business. The map views are simple, with green, yellow, and red indicators. With a business analyst at the controls, executives see a global map of markets growing or shrinking compared with expectations, and they can drill down to the countries and categories, which range at P&G from laundry detergent and shampoo to diapers and potato chips.

Business Sphere meetings now take place at every level of P&G, with the same focus on the best and worst results, and on taking action quickly. So, yes, P&G has the right buzzwords for any analytics project: predictive, holistic, actionable, proactive, and collaborative. But it has another one that many such projects lack: real.