Ram Charan On The CIOs Role

The business adviser talks with us about how CIOs must take action amid the current economic turmoil.
Rob Preston
VP & Editor in Chief, InformationWeek
January 16, 2009

World-renowned business adviser Ram Charan, author of the new book Leadership In The Era Of Economic Uncertainty (McGraw-Hill, 2009), recently talked with InformationWeek editor in chief Rob Preston about how CIOs and other executives must step up amid the economic turmoil. Following are excerpts.

InformationWeek: You meet with CEOs from all over the world on a regular basis. What's changed at the highest levels of business?

Charan: Boards have gotten very actively engaged in the interests of the enterprise. That wasn't so before. Some boards met in the September-October period more than six times on the telephone, on very short notice. It's not that many companies have done wrong. It's because the global financial system went out of control. The most critical thing is, you have to manage first for the survival of the company, even if you're a AAA-rated company. Now it's all about cash. We've got to see where the cash is coming from, where it's going, and if the demand for your products takes a deep dive, what would you do?

InformationWeek: How can CIOs and other technology leaders best help companies navigate this economic uncertainty?

Charan: I would like to address the CIO specifically. I find these people to be very bright and hard working, but they need to change their orientation, really learn about this financial crisis, what are its causes, where is it going, so they can engage in the right conversations at the CEO table. Item No. 2: They need to understand the cash-flow issues of the company. If the cash flow is down, where are the areas where they can help--outside their IT budgets--in the short term to free up the trapped cash, collect the cash better? Third, they need to think of the lines-of-business people as their customers. Go and sit with them, interview them. And then come back to them with ideas. Fourth: What can they do in terms of the IT budget? Here, the exceptional CIO is going to shine. Having done the first three items, the CIO needs to take his team off-site for a day to reprioritize existing projects. Say you have 50 projects. You must reprioritize them according to what will free up cash flow in the short term. Then play this scenario out with your team: If for some reason top management cuts our budget in half or by a quarter, what will be the new priorities?

More in this series:
CIO Prescription: How IT Is Riding Out The Recession
UPS: Positioned For The Long Haul
Outlook 2009: Jobs, Budgets, And More
InformationWeek: So does the longer-term, transformational kind of work then take a backseat?

Charan: You have to look at your budgets in three buckets: First, the utility, keep the lights on, keep the computers working. Two is compliance. There will be more regulation. Do the benchmarking, be more efficient, try to standardize. Third is the discretionary projects. The thing I want to caution every CIO about: What criteria you were using in the fall of 2008 to call something transformational may have become irrelevant.

InformationWeek: In working with LOB heads, when should CIOs lead and when should they follow?

Charan: You must present ideas that will help them achieve their goals. Right now they're preoccupied with short-term goals. Longer term, if IT were an independent company, CIOs would have to go and learn much more about the business. They should visit their customers, and their customers' customers. The CIO of McDonald's visits stores and observes the people who take orders and the consumers standing in line. Every CIO needs to do that. You can delegate the IT work, but to be at the table with the LOB people and the CEO, you must talk in their language and understand their challenges. IT people, pound for pound, are brighter than most people, but they are too narrow. They need to become broader.

InformationWeek:On the broader landscape, what's your take on the financial and auto industry bailouts?

Charan: The government has to pay attention to the overall conditions, and the main condition right now is the potential domino effect of a reduction in jobs. The level of unemployment is unacceptable. The "fear of fear" is here. The unemployment rate is now at around 6.9%--if it goes to 10%, what will it do to the nation? If it does that, it will create further unemployment ... it's a downward domino effect.

The government can't invest its time in ideology. It must confront reality. At this stage, if these two industries go down, what is the knock-on effect on subsequent unemployment? Second, even if they're bailed out now, will they survive? Third, if they survive for the short term, will they be able to do what they need to do to have that 50% or whatever market share they need to be successful? 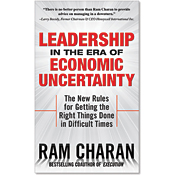 InformationWeek: If you were Barack Obama's chief economic adviser, where would you start?

Charan: The first priority is to get the nation out of the funk. He needs to address multiple fronts, but the most important front is to get the Treasury secretary, Federal Reserve chairman, and five or six top bankers together for a day at Camp David. They need to figure out what will ungum the gummed flow of transactions between banks. And don't let them out till there's a satisfactory answer.

InformationWeek: Any parting advice for CIOs?

Charan: Remember you are a leader. With leadership in tough times, you need to be sensitive about the psychology of the organization. Take your IT team aside. Be honest. Tell it like it is. No sugar coating. Not too optimistic. Not too pessimistic. Your leadership is going to be tested.