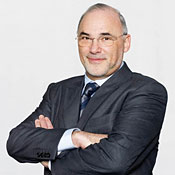 • While saying he's not a fan of buzzwords like cloud computing, Apotheker said all of SAP's software will eventually be provided in both cloud and on-premises versions-a "hybrid" approach similar to Microsoft's "software plus services" mantra. "All of these models will merge," he said, as it becomes more cost effective for enterprises to build their own behind-the-firewall private clouds.

Apotheker said SAP remains fully committed to its Business By Design software-as-a-service product, aimed at small and midsize businesses, though he said the company still needs to iron out a few details of that business model. He didn't elaborate. SAP has 80 "charter clients" for Business By Design, and Apotheker said he expects the service to ramp up in 2010 as "the first completely integrated enterprise software suite delivered on demand." One obstacle: SAP's global customers can't get reliable broadband access to the service in certain countries, he said.

• Apotheker seems more willing to mix it up than his predecessor was, showing both wit and exasperation in responding to competitors' claims. Referring to "the SaaS CEO" who argues that software support fees aren't needed under a subscription service model, he said, "That's a bloody joke," as support fees are built into subscription pricing. Apotheker said SAP's months-old Enterprise Support program updates the decades-old enterprise software maintenance model. With Enterprise Support, SAP promises customers that if its software doesn't deliver independently verified improvements in four areas--business continuity, business process performance, investment protection, and total cost of operations--customers get financial compensation. While saying that SAP's enterprise customers can choose to take a pass on Enterprise Support, he added: "If they're running business-critical applications, they'd be out of their minds not to pay for support."

* On the economy, while prefacing his remarks by saying he's "not a prophet," Apotheker said the company is starting to see some signs of economic stabilization, with real improvement not happening until at least 2010. "All that money being spent [by governments] globally must go somewhere," said Apotheker, who added that he expects SAP's sales to be flat or decline slightly this year but increase by double digits over the "medium term." In the fiscal first quarter, SAP's software license revenue was down about a third compared with the year-earlier quarter, though total revenue declined only slightly.

• Looking to capitalize on the populist backlash against big business, SAP is launching a marketing campaign around the theme Clear Enterprise. Its goal: Help businesses rebuild trust and confidence with customers, regulators, shareholders, and other constituents, ostensibly by using SAP risk management, data analysis, reporting, and other software tools. Apotheker, not a fan of buzzwords, nonetheless surrounded the campaign with four of them: accountability, transparency, agility, and sustainability.

• Software is only at its beginning, not its end, Apotheker said. As broadband and mobile devices become more ubiquitous, for instance, so will enterprise software. And while SMBs represent SAP's biggest growth area, he still sees plenty of upside among large enterprises.