50%
Tweet
The FBI paid approximately $1 million for a hack into an encrypted iPhone, and now plans to keep the details to itself, according to The Wall Street Journal. The government also dropped case against Apple in Brooklyn -- and that has law enforcement fuming.

The FBI has decided not to disclose details to Apple about a security vulnerability that enabled hackers to unlock the encrypted iPhone of San Bernardino terrorist Syed Farook, The Wall Street Journal reported April 26.

The report cited "people familiar with the matter," and noted that an Apple attorney suggested that whatever the FBI found would "have a short shelf life," since Apple is continually working on software improvements.

On March 28, the FBI dropped a California court order against Apple, requiring it to unlock the phone and create code that would allow the FBI to bypass two security measures in the future: An auto-erase function that essentially clears the phone after too many incorrect password guesses, and a feature that extends the time allowed between incorrect guesses.

In that filing, the FBI noted it had received promising help from "an outside party." 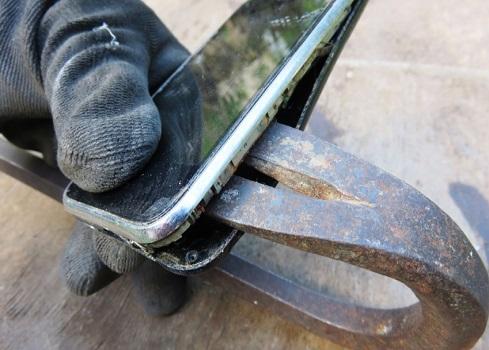 FBI Director James Comey, at a college speaking engagement days later, said he was unsure of whether the FBI would share the details that it had acquired with Apple, since that would put the FBI "back to where we started from."

It was later revealed that the FBI had paid a group of hackers likely more than $1 million to unlock the iPhone.

In principle, however, the FBI has proven willing to share security information that can help Apple to keep its customers safe.

The FBI informed Apple of a vulnerability in Mac OS X and iOS software on April 14, Reuters reported April 26. It was the first time it had done so, and it proceeded through the Vulnerability Equities Process, a "controversial" process, according to Reuters, that was established by the White House for just such a purpose.

In that instance, the Reuters report added, an Apple executive said the problem had already been fixed by Apple nine months earlier.

The government recently also dropped a case against Apple in Brooklyn, where it had asked Apple to unlock the iPhone of an alleged drug dealer in New York. Bloomberg reported April 22 that the government "no longer needs Apple Inc.'s assistance to get into" the iPhone.

On April 21, law enforcement groups filed arguments against Apple with a Brooklyn federal court, fearing it was setting a precedent that would make people likewise push back against law enforcement efforts.

"If Apple were to prevail in this court, the public at large may think twice about cooperating with law enforcement when called upon to do so, invalidating centuries of well-established law and common practice," the groups said in filing, according to ABC News.

"If the court adopts Apple's reasoning, public safety will suffer," they added.

While Apple has cooperated with law enforcement efforts for years, the Brooklyn and California cases were its first public instances of resistance.

Apple brought the issue to the public with a message posted to its site.

"This moment calls for public discussion, and we want our customers and people around the country to understand what is at stake," it said.

Michelle Maisto is a writer, a reader, a plotter, a cook, and a thinker whose career has revolved around food and technology. She has been, among other things, the editor-in-chief of Mobile Enterprise Magazine, a reporter on consumer mobile products and wireless networks for ... View Full Bio
We welcome your comments on this topic on our social media channels, or [contact us directly] with questions about the site.
Comment  |
Email This  |
Print  |
RSS
More Insights
Webcasts
5 Steps to Integrate SAST into the DevSecOps Pipeline
Linking, Orchestrating, and Managing Your Enterprise Security Systems
More Webcasts
White Papers
Simplify Your App Security
NetFlow vs Packet Data
More White Papers
Reports
Can You Spare 10-12 Mins to Help Us Out with a Survey on Tech Trends?
Got 7 Minutes? Dark Reading Needs Your Help With Our Survey on Incident Response
More Reports

The FBI paid approximately $1 million for a hack that was freely available on the internet, and only works on phones running older versions of iOS.

I agree with the decision of the federal government they paid to hack the phone information is now there's . Apples inability to address this issue quickly created the market for hackers to crack encryption and get rich in the process . Now others will see this as an opportunity . What acts of terror are involved we don't have the time to quibble we need to address the issue before the next attack . I'm certain this will not be the first hacker to crack apples devices
Reply  |  Post Message  |  Messages List  |  Start a Board

What's to stop an enterprising group from further developing device cracking software? This is a newish market that will probably thrive after these cases.
Reply  |  Post Message  |  Messages List  |  Start a Board

There's always been an opportunity for people to break into phones, but now there is MORE, due to Apple's childish attidue

Apples inability to address this issue quickly created the market for hackers to crack encryption and get rich in the process . Now others will see this as an opportunity .
Reply  |  Post Message  |  Messages List  |  Start a Board

That's completely ridiculous. Apple's attitude wasn't childish - anything but. It protected its customers, despite threat of legal action from government and law enforcement. It continued to stand by its users when the pressure continued to mount too.

It is the FBI which has made all iPhones weaker. By helping bring this hack to the for and now not sharing it with Apple, it is going to make it possible for other companies, law enforcement agencies and nefarious individuals to gain access to anyone's iPhones if they want.
Reply  |  Post Message  |  Messages List  |  Start a Board

First off, the phone was running an older version of the iOS. For all we know, it is a hack against an already known and sealed bug. And no one has claimed they cracked encryption. They cracked getting into the device. (Heck, on my older iOS iPhone, you can bypass the lock by using Siri. But I'm sure that's been fixed now...).

And what issue needs to be addressed "before the next attack"? The issue of allowing the government to read our data at their will? Or the issue of having our devices insecure to hackers?

BTW, none of this would have stopped San Bernadino, so it isn't going to help 'stop' the next attack unless the government just wants to read all our data looking for terrorists. Oh, right, they're already doing that...
Reply  |  Post Message  |  Messages List  |  Start a Board

Hackers exist, They've been hacking for money for years (once they realized that, rather than just destroy or getting data for the fun of it, they could sell their ill-gotten information or computer access as a career). They haven't been sitting around waiting for the government to go "Hey, anyone want some free money? Just find us a way to hack into the iPhone!". You can be sure these hackers already knew this exploit, and they just sold it to the governement, that's all.

Hackers are out to make money. They're already out there trying to get our personal information to sell to others, or use themselves. They're installing ransomware that encrypts your computer and extorts you to pay them. They're installing malware to create botnets in order to have a mass of computers at their control, to sell their use to whoever is willing to pay.

The goverment in just another buyer of their warez.
Reply  |  Post Message  |  Messages List  |  Start a Board

If Apple had a blanket policy of saying it will never help anyone or any government get into a phone then I see their logic, however as noted on one of the other blogs here they have allowed access to phones in other cases. If they were the ones to provide the access point it would keep other users data safe. Now that a hacker knows the way in and was compensated handsomely for their work it will create a market.

You are right this would not have prevented San Bernadino but maybe it would have prevented Brussels or some other planned attack we have no knowledge of, this person was a known terrorist not a private citizen. I think that is an important distinction. Criminals are not awarded the same rights as private citizens as part of our laws.

Yeah, but maybe people would trust law enforcement more if, say, they weren't given powers to just stop people walking on the street and frisk them, because the officer thinks they look suspicious.  Or stop motorists in various states and literally give them the option to give up their vehicle/cash/whatever, or go to jail on suspicion of drug distribution charges (because anyone who carries a thousand dollars in cash is certainly up to no good). Or how they all rally around their own and cover up for the actions of a bad cop. Or they're caught sniffing all our communications and storing that somewhere.

And law enforcement wonders why they have such a bad rap and people don't trust them.
Reply  |  Post Message  |  Messages List  |  Start a Board

Yeah, but maybe people would trust law enforcement more if, say, they weren't given powers to just stop people walking on the street and frisk them, because the officer thinks they look suspicious.  Or stop motorists in various states and literally give them the option to give up their vehicle/cash/whatever, or go to jail on suspicion of drug distribution charges (because anyone who carries a thousand dollars in cash is certainly up to no good). Or how they all rally around their own and cover up for the actions of a bad cop. Or they're caught sniffing all our communications and storing that somewhere.