Tech culture prizes long hours at the office. How does that influence new fathers when it comes to family leave?

Earlier this week, The New York Times published a detailed story about the career risks men face when they take paternity leave to help care for a newborn child.

As the story reports, "Taking time off for family obligations… could have long-term negative effects on a man's career -- like lower pay or being passed over for promotions."

This isn't meant to garner sympathy for men; after all, women have had to face this risk -- and suffer real consquences -- for ages. But it got me wondering about the tech industry and whether there's a stigma associated with family leave.

Tech culture tends to celebrate long hours at the office, whether it's unsnarling a gnarly network configuration until 2:00 a.m., or a coding marathon that stretches over multiple days. One implication of this culture is that people who don't put in Olympian hours might be regarded as less valuable to the organization.

Thus, while companies might have explicit policies that make paternal or family leave available -- and federal law requires that companies with 50 or more employees provide at least 12 weeks of unpaid leave for events such as childbirth and adoption -- internal culture might influence men to take just a small portion of it, if any at all. 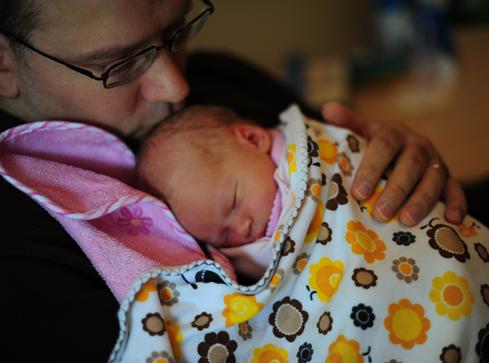 This isn't a problem just in the tech industry, but in the workplace overall. According to the NYT story, almost two thirds of men who took time off from work after a child's birth took a week or less. That's unfortunate, because the story suggests that the more that men become involved in child care, the more positive effect it will have on women.

The article cites a statistic from the Institute for Labor Market Policy Evaluation, which is in Sweden, that for every month of leave a father takes, the mother's "future earnings increased an average of 7 percent."

The same tech culture that makes hours worked into a status marker might also be trying to change attitudes toward paternity leave. The NYT article notes that Facebook offers four months of paid family leave and profiles a male Facebook exec who took the entire time. However, the article also notes that, although a majority of female employees at Facebook will take the full leave, most male employees only take a portion.

Do you believe there's a stigma associated with family leave? If you were offered paid leave for childbirth or adoption, did you take the maximum available amount? If so, did you notice any repercussions when you returned to the office (aside from a mountain of unanswered email)?

If you were offered leave but didn't take full advantage, why not? Does your company culture support family leave? Would you support a colleague or employee who wanted the time off?

@Ashu001: I appreciate your perspective and applaud it. However, I do think there needs to be a national discussion that addresses both the cultural and legal issues around paternity leave. right now, according to federal law one is entitled to 12 weeks of Family Medical Leave above and beyond one's accrued vacation or sick time. However, that leave is unpaid leave. I agree in theory a Dad could save up all his vacation and personal days and, in most companies, manage at least 2-4 weeks off, but any more time than that would fall under the Famiy Medical Leave Act and would be unpaid time. Under that act, the company is required to keep "a" job for you, but doesn't have to guarantee that you get back the exact job that you left when you took the time This law applies equally to men & women, while individual companies will set their own maternity/paternity policies. IMHO men and women should have equal time off from their places of work, but most policies allow more time for Moms than Dads. Ant that's not even getting into the social stigma and career risks. Again in theory it's true that a Dad should put family first, but sometimes putting family first means making sure that you are earning enough to support them. Lots of gray areas IMHO.
Reply  |  Post Message  |  Messages List  |  Start a Board

@Ashish - The problem half resolved itself when my daughter went off to college! When she & my husband are home and I need to focus, I have been known to put on my headset and pretent I am on a call. But you're right, family comes first, so all in all, I try to be grateful that I have loved ones to interrupt me :-D
Reply  |  Post Message  |  Messages List  |  Start a Board

@PedroGonsales: "I really think there should be a national discussion on making sure companies have policies that help rather than hinder family life." -- Agree with you 100%. It's unfortunate that there is a stigma for Dads taking time off. it also implies that the man's time in the office is somehow more important or considered more valuable than the woman's time at work, even if the two have equal positions and equal pay. For women to be able to progress equally, there needs to be equal treatment of men in the workplace when it comes to parenthood, taking care of elders, etc. Right now, the burden falls primarily on the woman because most policies favor women over men in those family roles (and I use the word "favor" quite loosely here, as most policies for men and women are completely lacking in the U.S.)
Reply  |  Post Message  |  Messages List  |  Start a Board

If you work from home, it really helps to have a way to isolate yourself so people don't wander in.
Reply  |  Post Message  |  Messages List  |  Start a Board

Men and women will both have times in their careers when, as I once heard a female CIO describe it, you put the gas pedal down on your career, and times when you must ease up a bit on speed. This may be because you're a new parent, you're caring for an aging parent, someone in your family is ill...just because you have this kind of need does not mean you won't come back ready to give 100%. In fact if your company does treat you like a human being during this situation, it should only increase your loyalty to the company. As for paternity leave, it's a positive development. Men will have to model actually taking it, so it's the norm not the exception.
Reply  |  Post Message  |  Messages List  |  Start a Board

I've worked from home for a long time, so my family has pretty much figured out that wandering in is frowned on. Yet my husband still does it. I am sometimes tempted to drive over to his office in the middle of the day, wait until it looks like he's deep in concentration, then walk in and ask if we have any more milk.
Reply  |  Post Message  |  Messages List  |  Start a Board

I recently discussed the reality of working from home with a young child with my cousin. He just started working at home, and is getting used to the upsides and downsides -- including spouses wandering in and starting to chat.
Reply  |  Post Message  |  Messages List  |  Start a Board
InformationWeek Is Getting an Upgrade!