How to Prep Your Career for the AI Job Apocalypse - InformationWeek

Will your job end up being automated or eaten by an AI or robot? Here's a deeper look at careers that will continue to be in high demand in the decade ahead.

A few years ago, consulting giant McKinsey predicted that artificial intelligence and automation would eliminate a 73 million jobs by 2030. That's a scary number of jobs, and a prediction that led many professionals to evaluate their own skills and research ways to future-proof their careers from the coming automation/AI job apocalypse.

In the absence of an elder expert giving you one word of advice, like "Plastics!" what can an IT professional (or a new graduate) do to ensure that the robots don't come to take your job? That's been a key question over the past few years, and one without that simple one-word answer. Experts have said that jobs focused on implementing and managing artificial intelligence and automation would be great avenues for job-seekers to pursue. Experts have also said that jobs that require a level of creativity that could not be replicated by machines would also be safe in the future, although they may not pay quite as well as the AI jobs. 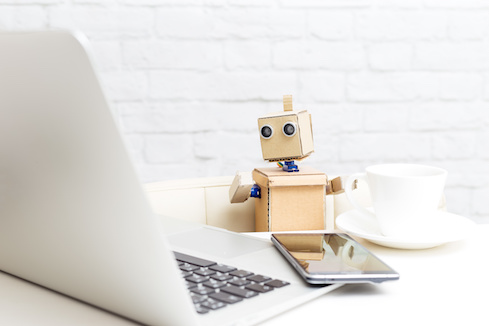 A series of reports released over the last year by Forrester Research -- the most recent one titled The Future of Work -- has sought to drill down to provide a deeper answer that burning question: What jobs and skills will be in demand in the age of AI and automation?

One of the report's authors even took it a step further in a new book that includes some of the Forrester research about the jobs that will be devastated and the jobs that will thrive in the future, together with interviews with people whose jobs will likely be eliminated. The book is called, "Invisible Robots in the Quiet of the Night: How AI and Automation will Restructure the Workforce."

Knowing how to optimize which side you are on will be crucial. Le Clair said that Forrester has predicted that for every 6 jobs lost to automation there would be 2.4 jobs created.

Among the Forrester predictions, informed by U.S. Census Bureau projections and US Congressional Budget Office projections, is that there are four categories of jobs that will add workers. They are human-touch workers, cross-domain knowledge workers, teachers/explainers, and digital elites.

Human touch workers include nurses, physical therapists, funeral directors, caregivers for the elderly, and others. Forrester said there are 76 occupations that fit into this category of jobs that require intuition, empathy, touching, and physical and mental agility.

Cross-domain knowledge workers include a total of 92 occupations such as emergency room physicians, lawyers, and marketing pros who build product strategies. There is too much variation in these jobs for a machine to be able to replace humans, Le Clair said.

Teachers and explainers include 64 separate occupations, according to the report, and not all of them will require a four-year degree. Forrester said that new roles will be created to explain what machines have done, what they will do, and how they work.

Digital elites are the final category. IT pros are most likely to fit into one of these 20 occupations, which include big data specialists, process automation experts, security analysts, human-machine interaction designers, robotics engineers, blockchain specialists, and machine learning experts.

"Digital elite jobs show the most growth," Le Clair said. "The IT world has a great number of digital elite."

But not all the jobs and skills in IT will be set for job growth. Some of them will likely be eaten by the robots, too. For instance, chatbots and virtual help desk technology will take more user calls.

"On the other hand, you will see tremendous insatiable demand for people manipulating data, doing data cleansing, doing data science," Le Clair said. More IT workers will be moving toward architectural issues and analytics. Robotic process automation may mean that you will have a job managing 100 different automations running in a data center, Le Clair said.

But some workers will be "under water," according to Forrester, as automation and AI handle the tasks that they used to perform. Forrester said that coordinator jobs that manage the work efforts of others -- from scheduling to order management to shipment logistics performed via spreadsheets -- are certain to be automated in the years to come. "If you have a clipboard in your hand today, you'll soon be asked to put it down," the report said.

Cubical workers will also be prime targets for automation and job loss. This will include administrative and support jobs in finance, accounting, and procurement. Forrester said that 72 diverse occupations fall into this category. This includes some of the work that has been outsourced to offshore companies. Forrester said that growth has stalled for five big Indian business process outsourcing companies -- Cognizant, HCL, Infosys, and Wipro -- which in aggregate saw 60% year over year growth in 2000 and in 2018 saw growth under 5%.

There are a number of workers who will fall into middle categories, too. They include single-domain knowledge workers, physical workers, function-specific knowledge workers, and location-based workers. These roles are likely to lose jobs in the long haul, but progress in automating them will be slower.

Forrester talks about two other categories that it classifies as evacuees -- those who leave the changing workforce. They are mission-based workers who "want to align their personal values and lifestyles with their work." In this context Forrester says it's no surprise that yoga and mindfulness/meditation services is expected to grow to be an $11 billion industry by 2020. The other category is digital outcasts -- those who don't have the aptitude or attitude to transition to work with advancing machines.

For more coverage of the future of work and jobs expected to shrink or grow, read:

10 IT Jobs That Will Be Done by AI

Data Science: A Guide to Careers and Team Building

AI and Careers: Predicting Where The Jobs Will Be

Jessica Davis is a Senior Editor at InformationWeek. She covers enterprise IT leadership, careers, artificial intelligence, data and analytics, and enterprise software. She has spent a career covering the intersection of business and technology. Follow her on twitter: ... View Full Bio
We welcome your comments on this topic on our social media channels, or [contact us directly] with questions about the site.
Comment  |
Email This  |
Print  |
RSS
More Insights
Webcasts
Keys to Better Cyber Risk Assessment
How the Rapid Shift to Remote Work Impacted IT Complexity and Post-Pandemic Security Priorities
More Webcasts
White Papers
Annual Cybercrime Report
Data-Driven Vulnerability Remediation with Vulcan Cyber - A Case Study With Snowflake
More White Papers
Reports
We Need Your Input: Trends in Workforce Optimization
Enabling Enterprise Resiliency Through Cyberthreat Detection
More Reports