InformationWeek salary survey data shows the gender pay gap remains alive and well in IT. One reason: Women walk a tricky tightrope during the negotiation process.

Do you fear you bring home less money than the guy in the office next door? If you're a female IT executive, you're probably right. In our 2014 InformationWeek US IT salary survey, the difference for male and female IT executives spoke for itself: Median total compensation for male IT executives is $25,000 higher than for female execs, according to our data. Male VPs of IT -- a crucial "lieutenant" role on the career path to CIO -- report earning a median base salary of $139,000 -- while females in that role report a median of $125,000.

What are we doing wrong, ladies?

As my mother loves to say, "If you don't ask for it, you won't get it." But the act of asking for more in itself is fraught with complications for women, says Joan C. Williams, distinguished professor and founding director of the Center for WorkLife Law at University of California's Hastings College of the Law, and author of eight books, including What Works for Women at Work: Four Patterns Every Woman Should Know (NYU Press, 2014).

"If I hear once more that the reason for the wage gap is that women don't negotiate, I may just blow a gasket," she wrote, in an eye-opening column on salary strategies.

"Women don't negotiate because they're not idiots," she wrote.

Williams will be my guest on InformationWeek Radio to share her knowledge -- and take your questions. Join us for Salary Negotiation For Women: Get What You Deserve, Tuesday, July 22 at 2 p.m. EDT (11 a.m. PDT). Register now.

Williams' point about women not being idiots: Some of those times you kept your mouth shut, at annual review/raise time, or as you accepted a new job, you were right. You used your emotional IQ, your intellect, your research, and your knowledge of the personalities involved to decide that asking for more would likely backfire.

There's no perfect mix of masculine and feminine. Every boss and coworker you have may think a different balance of the two is "normal." 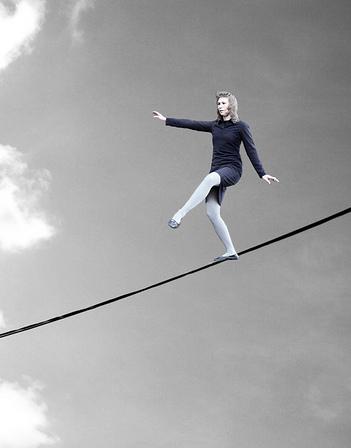 Sounding familiar? Women walk this tightrope in all sorts of professional situations -- from speaking up in meetings to tooting your own horn up the chain of command.

I wrote about it with regard to a high-profile project I led. I wrestled with what degree of worry I could show. Too much, and I'm branded a Nervous Nellie. Not enough, and I'm branded incompetent. I finally embraced the fact that no one would think I was Chicken Little for having legitimate worries about project issues. After all, the men did, too.

This tightrope dynamic especially factors into hiring and salary negotiations, Williams says. Studies show women get penalized more often than men do when asking for more money. But you can use strategies to try and stay in balance. So let's take how you handle negotiations to the next level.

In our online broadcast July 22, Williams and I will discuss classic mistakes to avoid in negotiations, whether women wait too long to try for the next promotion -- and how to be assertive at work without being labeled the dreaded word that rhymes with witch. Bring your experience and your problems.

With regard to walking the tightrope, I see reason for optimism for women in IT. In the past year, I have met a growing number of female CIOs and IT leaders who simply will not downplay being women. I listened to Dell CIO Adriana Karaboutis declare: "Get out of your own way" and advise women to reach sooner for that next career step.

I watched the day vanish when all professional IT women wore boxy grey or brown suits. When I moderate panels on female IT leadership these days, the participants wear bright blue, brilliant yellow -- even pink.

I just ran a column by Daria Hutchinson, a woman in a leadership role at big data company Platfora, that proved a hit with our readers: How To Explain Big Data To A Fifth Grader. One of the cool things to me about the article: She included a photo of her with her daughter. When I reported on the microprocessor and PC industry in the 1990s, I was lucky to meet female execs at all. And if I did, they never even hinted at being moms. That would be leaning too far on the feminine side of the tightrope.

I see women inside and outside IT leading by example, walking the tightrope with bravery and grace.

Let's keep sharing what we learn on that walk. Register now to join me for the Salary Negotiation radio show with Joan C. Williams.

Laurianne McLaughlin currently serves as InformationWeek.com's Editor-in-Chief, overseeing daily online editorial operations. Prior to joining InformationWeek in May, 2011, she was managing editor at CIO.com. Her writing and editing work has won multiple ASBPE (American ... View Full Bio
We welcome your comments on this topic on our social media channels, or [contact us directly] with questions about the site.
Comment  |
Email This  |
Print  |
RSS
More Insights
Webcasts
The Experts Guide to Ransomware Response
Multi-Cloud Data Management for Modern Applications
More Webcasts
White Papers
Top Serverless Security Risks and How to Mitigate
Ransomware Security Breach Summary: Food Production
More White Papers
Reports
Are We Cyber-Resilient? The Key Question Every Organization Must Answer
Dark Reading Report: Battle for the Endpoint
More Reports

@Kimberly, thanks for sharing your experience. I agree with you on culture -- a great salary in a culture you can't live with is not going to be a win in the long run. In the interviews I have had since becoming a parent, I didn't want it to be a state secret that I was a parent. So I let it be known at the very end of the process. Some experts advise the opposite, but I needed to know the culture fit.
Reply  |  Post Message  |  Messages List  |  Start a Board

Good question Lorna. Many job interview processes begin with a recruiter or HR pro asking you for a range you are seeking. You have to name at least a range first. This is why research is crucial. Let's see if there's more specific advice we can share here.
Reply  |  Post Message  |  Messages List  |  Start a Board

Question: I was always told that in any negotiation, the first person to name a figure loses. However, recently I've seen a few experts question that conventional wisdom. What's her take?
Reply  |  Post Message  |  Messages List  |  Start a Board

One thing I would be interested to hear more about in the call is whether the approach women take in negotiatiations, and their success with it, varies much by industry.
Reply  |  Post Message  |  Messages List  |  Start a Board

Daria, thanks for chiming in here. The example you raise is a good one. The mix of men and women on the team can really matter in situations like this, too. Also, are you hanging out there on your own asking for the change in situation, or have others asked? Men may be seen as trailblazers making these requests -- I'm guessing your colleague was -- while women may seem "pushy." It's a classic tightrope situation.
Reply  |  Post Message  |  Messages List  |  Start a Board

This NPR article points to a study that suggests women do better negotiating for others than themselves when it comes to salary. Perhaps we'd all be better served by an advocate in dealings with management. It's said a lawyer representing himself or herself has a fool for a client. It seems reasonable to assume that holds true in negotiations that don't involve attorneys or courtrooms.
Reply  |  Post Message  |  Messages List  |  Start a Board

Feel free to post questions for Professor Williams here. The goal is to share many practical strategies and tips during the show and Q&A. I hope you'll join us.
Reply  |  Post Message  |  Messages List  |  Start a Board

By coincidence, this New Yorker article on the same theme just showed up in my Twitter feed.Looking forward to this radio broadcast and discussion:


LEAN OUT: THE DANGERS FOR WOMEN WHO NEGOTIATE