Despite ongoing efforts to further diversify who fills the ranks of tech jobs, seeing real results is taking a protracted amount of time.

Today marks International Women’s Day, once again calling attention to women’s rights and highlighting movements to improve gender parity in technology roles. The topic is far from new but has grown into a resounding call for ongoing discussions within organizations rather than one-off showpieces. Some stakeholders from SAP, McAfee, Dataminr, and Workforce Logiq offered insight on ways organizations might make lasting, progressive changes that benefit the business while tackling gender imbalance in the tech scene. 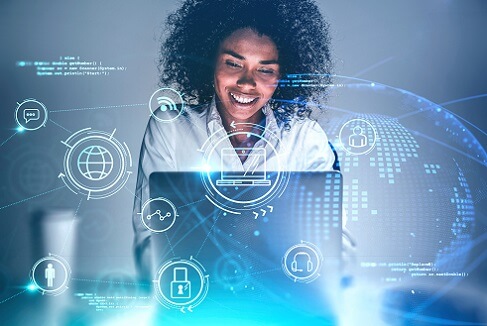 Early into a career, salaries and opportunity might feel balanced, but the gender divide can become clearer when climbing the corporate ladder. “There’s not so much difference when we get into the workforce. There’s only like a 6% difference at entry level,” says Joan Heald, vice president of intelligence community sales at SAP National Security Services (NS2). “When you get to the C-suite level, there’s a 47% difference of more men at that level than women.”

The slow advancement toward true career parity shows a need for persistence when championing diversity, she says. “If we’re not on this constantly, no progress is going to be made,” she says. Back in the 1970s, Heald says, women were paid 59 cents on every man’s $1. By 2020, that ratio improved to 81 cents on every dollar, she says. “It has taken us approximately 40 years to gain 22 cents. Studies show we will not have pay equity until 2052. That’s crazy to me.”

Heald is also a co-chair of the NS2 Women’s Initiative Network (WIN) for mentorship and professional development and she sees gender equality increasingly prioritized among organizations. “Tech companies are very focused on making sure they are recruiting and providing opportunities for women in tech,” she says. “It’s really an important part of most companies’ growth and strategy.” Heald says WIN got its start after an email sent by Mark Testoni, CEO of SAP NS2, two years ago raised a call to action to help give women a platform within the organization. “We started with a charter to forge equity and fuel innovation,” she says.

This has included providing examples and guidance from a women’s speaker series. Heald also says it is important for efforts that support diversity and improve equality start at a young age to tackle the source of the issue. “We have to make sure things like Girls Who Code are growing,” she says. “We need to keep doing more of that.”

Though there are signs of progress in narrowing the gender divide on employment in broad terms, Lynne Doherty, executive vice president of global sales and marketing at McAfee, says the next level is working on career advancement. “It’s not just about having numbers,” she says. “It’s about having healthy career opportunities for all of those people to advance.” Awareness of disparity, improved representation, and career advancement opportunities are core pieces Doherty says must be part of efforts to drive change.

More detailed elements include addressing hiring practices such as the wording of job descriptions, which might keep qualified individuals away. For example, it is not uncommon to speak in terms of stopping adversaries and fighting threats in a cybersecurity position, rather than phrasing the job as keeping people safe. “Sometimes language attracts or doesn’t attract people,” Doherty says.

It is not enough, though, to just launch a program or an affinity group to address gender disparity and other diversity issues in the workplace, she says. The effort must be tied to recordable results in compensation, advancement, and promotions. “It’s got to be reflected in numbers and actual metrics,” Doherty says.

Jen Jones, chief marketing officer of Dataminr, says though she has seen the technology landscape evolve over the course of her career, there is a need to do more in bigger, better, and faster ways. “Even though I’m encouraged to see continued progress, it feels like a slow arc over 20 years,” Jones says.

There has been a fair share of lip service across Corporate America and the technology sector, she says, about increasing diversity with different levels of meaningful efforts. Jones says Dataminr established employee resource groups that push for change internally and externally. The company also offers a robust mental health program, she says, with reminders and encouragement to make use of such resources.

There is also expanded parental leave at Dataminr, Jones says, giving all parents equal time off for the birth of their children, with the birth parent allotted extended time for medical recovery.

Companies that see tangible progress in narrowing the gender tend to make such efforts part of all levels of the organization, she says. “It’s got to have equal support from the most senior leadership ... all the way down to your most junior employee.”

When addressing representation in hiring, it is not enough to simply say the organization wants diverse candidates, Jones says. “You have to actually give your recruiting team the time to actively search and find more diverse candidates for all of your jobs.”

She also suggests hosting ongoing training on topics such as implicit bias and microaggressions.

The overall professional workforce may see close to 50-50 participation, says Christy Petrosso, chief data scientist and talent economist at Workforce Logiq, but gender disparity remains prominent when it comes to women in technical areas and industries. “We still see a huge gap in technology where only about 20-25% of that sector is made up of women,” she says. “There is still a lot of room to improve.”

The pandemic also had a greater impact on working women, Petrosso says, with about 2.4 million women exiting the labor market, compared with 1.8 million men. “Women have more responsibilities usually with family care, whether that’s children or aging parents,” she says.

With talk in recent years of wanting to make headway on gender balance, there seems to be a lot of heavy lifting to do in the tech sector. “Some of the biggest five tech companies on the planet only have about 35% total staff that are female,” Petrosso says, which includes roles in general across such organizations.

She says it can take a large investment to make progress and the effort must start at an early age to introduce potential career opportunities and encourage young women to take interest in STEM (science, technology, engineering, and math) curriculum.

Increasing the visibility of change is also part of the equation, according to Petrossso, as it can encourage potential hires to join the technology world. “There’s research that shows 38% of women are nervous about going into the tech career field because of the lack of representation,” she says. Organizations also stand to benefit by further diversifying their teams, Petrossso says. “Diversity in general creates a more productive and inclusive environment that allows people to be more innovative as well as productive.”

The Right Tech Exec to Lead Diversity and Inclusion Efforts

Can Artificial Intelligence Help Increase Diversity in IT?

Joao-Pierre S. Ruth has spent his career immersed in business and technology journalism first covering local industries in New Jersey, later as the New York editor for Xconomy delving into the city's tech startup community, and then as a freelancer for such outlets as ... View Full Bio
We welcome your comments on this topic on our social media channels, or [contact us directly] with questions about the site.
Comment  |
Email This  |
Print  |
RSS
More Insights
Webcasts
How the Rapid Shift to Remote Work Impacted IT Complexity and Post-Pandemic Security Priorities
SASE: The Right Framework for Today's Distributed Enterprises
More Webcasts
White Papers
2020 SANS Enterprise Cloud Incident Response Survey
The Top 5 Mistakes Everyone is Making in Vulnerability Remediation
More White Papers
Reports
The Need for Speed: Second Generation EDR
The State of Cloud Computing - Fall 2020
More Reports