What 'The Old Guy' Brings To IT Teams - InformationWeek

25 comments
Comment Now
IT pros report that hiring managers often favor young hires in the name of "culture" or "fit." But this may throw your team's balance off. 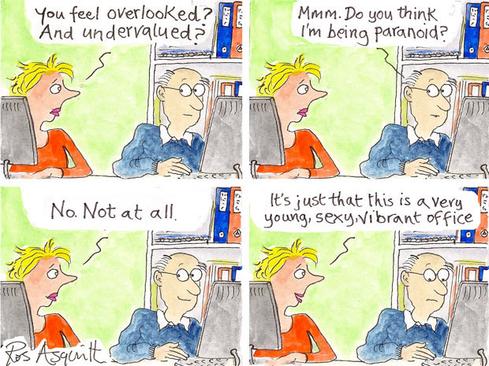 
Age discrimination is going to be a big issue in the private sector since you can get rid of employees in private sector that you can't in the government.

This is a very emotional issue but there is one factor that does not get mentioned as the biggest reason: machine.  Machines can do most of the work and you do not need lots of expereince to work with manchines, thus, experience is not that important today like it was in the past.

My dad, and accountant, got laid off when he was 55 and started his own tax services company since he could not find a corporate job.  I got laid off from a business development position at the age of 45 and could not find a corporate job so I had to start my own company.  And I did programming for 15 years and I am very current with the technology and business knowledge. It does not matter.

I would not be surprised if the age is below 40 today where it is hard to find a corporate job if you get laid off.

The only solution is to start planning your exit from a corporate job before it is forced on you so you have options.
Reply  |  Post Message  |  Messages List  |  Start a Board

If the employer cares about retaining employees, it won't try to make them work absurd hours, the sort only a young worker would put up with. Such companies are invariably more stable and more likely to thrive over time.
Reply  |  Post Message  |  Messages List  |  Start a Board

Diversity in age, backgrounds and experience almost always distinguishes healthy organizations from those that ar just plodding along.
Reply  |  Post Message  |  Messages List  |  Start a Board

I have bit my tongue about this aspect during the recent articles involving ageism (good articles by the way), because I don't want to be that grumpy old dude. But...

Having been brought in as a consultant, or even as leade developer or architect, to that young team. Here is what I have found, without fail, every single time: A group of quite likeable, enthusiastic and intelligent young developers, and mountains of horrifying code full of anti patterns and worst practices, and so much technical debt that even Obama would blush.

Ignore the experienced old dude at your peril!

With Afirmative Action, White males have it even tougher.  We are the disadvantaged not only because of age, but race.
Reply  |  Post Message  |  Messages List  |  Start a Board

I agree with Kristin. Plus, work is much less fun when everyone's pretty much cut from the same cloth.
Reply  |  Post Message  |  Messages List  |  Start a Board

And that does make sense, Kevin. I can't think of anything that has changed as radically as programming. Old timers like me actually used punch cards in college and thought green screen interactive sessions with text editors were the pinnacle of modern creation.

Then you got the Web 2.0 movement with AJAX, XML, JSON, etc.

And now it is mobile small Touch screen development, which is a development paradigm all it's own.

I wrote about a similar subject in an article for Application Development Trends in 2001.

It was called Greenhorns and Warhorses and you can read it here:

It's definitely not only an IT issue. That said, some of the folks I've spoken to on this topic, including an employment lawyer, suggest it's more prevalent in IT -- and especially in the developer/programmer community -- than in other fields.
Reply  |  Post Message  |  Messages List  |  Start a Board

I did not mean to leave the women out of this discussion. The reality is age pops up in hiring for both men and women. I heard a female CIO make an argument for diversity (including gender diversity) on her team once by describing the need for "texture" during group discussions and group decisions. I liked how she put that. Age adds texture and perspective, whether you are male or female.
Reply  |  Post Message  |  Messages List  |  Start a Board
<<   <   Page 2 / 3   >   >>
Editors' Choice
Hot Topics