'Why Not?': Power Phrase For Women In Tech - InformationWeek

Don't talk yourself out of challenges, jobs, or life experiences, female tech leaders at Interop advise IT professionals -- and a group of high school students in attendance.

Everyone should have a mental toolbox. During tough challenges, you acquire strategies, phrases, and wisdom from a diverse group of people, to be taken out and used for later problems. I have gathered some powerful tools from female IT leaders.

I listened to Wal-Mart CIO Karenann Terrell declare: I am a woman and that will never change. Translation: I will not downplay being a woman.

Adriana Karaboutis, formerly Dell CIO and now executive VP of Technology and Business Solutions at Biogen, told me: "Get out of your own way." Translation: Stop listening to that inner voice that tells you you're not ready for the next step.

[Are you achieving what you need to, or just working long hours? Read Getting Results: It's All About The Wins.]

Joan C. Williams, founding director of the Center for WorkLife Law at University of California's Hastings College of the Law, taught me the term "gender judo." Translation: Flip societal expectations of norms for men and women, as needed.

I heard another powerful phrase last week at the Women in Tech panel discussion at Interop New York, from Michele Chubirka, senior security architect at Postmodern Security: "Why not?" Translation: Stop limiting your career and life choices. (That's great advice for men, too.)

Our audience for the panel discussion included female IT professionals plus 10 female high school students from the Bronx Academy for Software Engineering and the Bronx International High School. Their visit to the Interop conference was organized by the Community Corps, NPower's skills-based volunteering program that connects technology professionals with nonprofits and education partners (in this case, Digital Ready, a New York City Department of Education initiative). 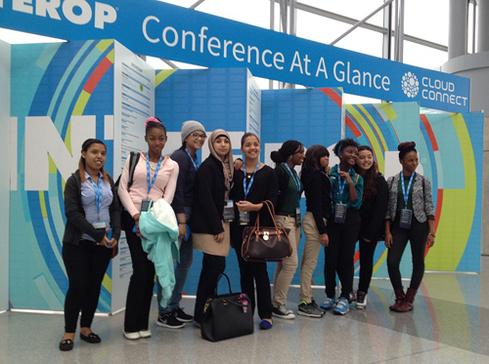 Students from the Bronx Academy for Software Engineering and the Bronx International High School pose after attending a Women In Tech panel at Interop New York.

One of the high school students asked Chubirka for advice on how to decide between two things she was passionate about: technology and dance. Chubirka told her: You don't have to choose. You may pursue a tech career and continue to pursue dance, art, or music.

My fellow panelist Lauri Apple, technology evangelism specialist at online retailer Gilt.com, went on to say that she has colleagues who do just that: tech career by day, art exhibition by night.

"I talked myself out of things," Chubirka said. Stop saying "I can't," she advised.

At a social meetup later in the week, I met two women who had both attended the panel and asked them what they were taking back to the office. Both said the same thing: "Why not?"

For me, the best part of the event was an informal mentoring session I had with five of the students, all 10th graders at the Bronx Academy for Software Engineering, where they are working with Java and Python and doing robotics projects. They told me eagerly about designing Tumblrs and Web pages, finding small problems in code, and making a robotic fish move through a course. "That fish was stubborn," one of them told me. But she was smiling. She beat that problem.

Their high school, a public school with a lottery system, has a sophomore class this year of about 110 students, including 17 women.

These 17 young women had to decide in the eighth grade to apply for the opportunity.

For women pursuing tech careers, the junior high school timeframe matters. Wal-Mart's Terrell speaks of this age as a key time young women walk away because of bullying. At the same time, schoolwork gets more challenging. Young women might not look around and see many role models. They also don't see many female technologists on television or in movies.

This is one reason I think it is imperative for women in IT to tell their career stories -- early, often, and loudly, so that girls see women who have done it and succeeded. And as my fellow panelist, Garima Thockchom, CMO of cloud startup RackWare, said, we must show young women that there is much more to IT than coding. For example, you might start in engineering and move into marketing, as she did.

One immediate way to make an impact in local communities is to do just that: Be present as a role model. Your peers aren't the only ones who want to hear about your career path, with all its twists and triumphs: Young women do, too.

Women in tech face grueling schedules. We juggle personal lives and workloads that push us just as hard as we will let them. But if you say you don't have time to go out and speak to young women, I ask you to think about those 17 young women working hard in the Bronx Academy for Software Engineering.

Here is what one of the high school students said of the panel discussion: "They taught me how they believed in themselves and how every time somebody doubted them, they said, 'Why not?' That has kind of inspired me to follow this path and not believe what people say."

Why not? Put it in your toolbox. Then get out and share it.

@Zerox, thanks for your input. I loved how you phrased "because we're imperfect role models." This is an important message for students to hear. No one is perfect. I think our society expects too much perfection from students, too soon. And not one of my role models fits the "perfect" adult mold.
Reply  |  Post Message  |  Messages List  |  Start a Board

These points cannot be stressed enough. It's very tough for young students to see the forest for the trees, and especially with such a limited perspective of what having a career is like and why it's important, many of them might be reluctant to volunteer for the extra workload that comes along with STEM courses and programs. Why would they if nobody has shown them the benefit and the satisfaction of it? Because young girls are more likely to be discouraged or criticized, and because they may lack role models, the risk is that much greater. It only takes one bad day to drop out of a program and never look back.

The bit about being able to pursue dancing alongside programming struck me as very valuable. Life is not about just doing one thing. You're not either 'this' or 'that'. The reason you want a strong and fulfilling career is to round out your life and give you room to pursue everything you want out of the world. We should be reminding students of that a lot more often. Many of us still struggle with that at all ages (think of all the unused gym memberships!) - but it's because we're imperfect role models that we'll be relatable. That's what these kids need.
Reply  |  Post Message  |  Messages List  |  Start a Board

thanks lorna and susan for sharing these resources. if you have a favorite we missed, share it here.

@Lorna.  Thanks for sharing those links.  I'll be looking into this.
Reply  |  Post Message  |  Messages List  |  Start a Board

I think we can all learn from the "why not?" attitude.  The positive attitude sets the stage for the whole project.  Also, the value of the advice IT profesionals can share with these students is tremendous.  It would make a huge impact on their lives, helping them lay a foundation to be great professionals in this field.
Reply  |  Post Message  |  Messages List  |  Start a Board

That is, indeed, an incredibly powerful phrase and one that could serve anyone (male or female) in any career. why not take on that new project? Why not approve someone else's idea? Why not become a mentor?

Check out these 12 resources for young women pursuing STEM careers, I'll wager any of them could use your time & expertise. Why not?:

It may take some effort to find mentoring opportunities, but here are a few resources:

Women in Technology has a program (called, amusingly, GIT): http://www.womenintechnology.org/git

Girls In Tech probably has a chapter near you: http://www.girlsintech.org/chapters/

10 IT Trends to Watch for in 2021 Cynthia Harvey, Freelance Journalist, InformationWeek,  12/22/2020
White Papers
Improving Your Enterprise's Protection With Cyber Resilience
The Dark Side of SD-WAN
What To Consider Before Renewing Your SD-WAN
Five Reasons to Protect your VPN with Multi-Factor Authentication
Zero Trust Evaluation Guide