If your enthusiasm for technology ever flags, just listen to Apple co-founder Steve Wozniak motor-mouth his way through all the possibilities he sees.

Attendees at the Gartner Symposium in Orlando, Fla., had that pleasure Tuesday night, and those I spoke with afterwards said it was one of the highlights of the conference -- not necessarily the most educational, but the most fun.

"The biggest thing about everything I did in work was it had to make things fun," he said. "The Apple II I designed was only for myself because I wanted to own a computer like that, and it came out so beautiful." Years later, when Steve Jobs led the company to create the iPhone, that was also a thing of beauty -- and this time Jobs was smart enough not to give Bill Gates a peek before the product launched, he said. 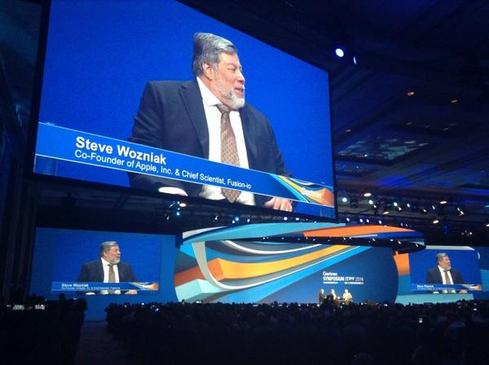 Particularly in this era of consumer-friendly technology, one of the best things an engineer can do is design products he would like to own himself. Wozniak sees that at work in some of the products he owns, such as his Tesla electric car. "When I look at the business model of that business that is so different and so right, I see a lot of aspects of it that fit Elon Musk and his family," Wozniak said, referring to the Tesla CEO and "engineer's engineer" who started Tesla, SpaceX, and other companies.

"I want it for myself" -- One of the design principles for everything @stevewoz does! #GartnerSYM

Google Glass may not be the wearable product that ultimately succeeds in the marketplace, but the more Wozniak hears it criticized, the more he wants to wear it himself, he said. "It's so nice and small and convenient that it triggers ideas ... about what the future could be."

[How to silence Google Glass critics: The Ultimate Wearable? It's 'Invisible'.]

Wozniak appeared onstage with two Gartner analysts whose job was to tee up a series of topics for him to riff on, but even two-to-one they were outmatched by his velocity of thought and enthusiasm. He talked a fair amount about Apple, although these days he also serves as chief scientist of Fusion-io, one of the companies that pioneered flash memory for data centers. Over the summer, SanDisk paid $1.1 billion to buy the company. Wozniak said his involvement in that firm is one of the ways he is helping enable exciting possibilities such as the Internet of Things.

One of the things he enjoys most is working with young, enthusiastic engineers. He remembers when he was studying computer science, he would get the textbooks on a Friday and power through them without waiting for the course to start because he was so eager to learn. "You couldn't stop me from going as fast as I wanted -- I couldn't go at the speed of the class." Particularly today, students of technology should not allow themselves to be held back, he said. "You shouldn't even think the way it's stated in engineering books is the way it has to work." Re-envision things however you want as long as you understand that "in engineering, it has to work -- that's the answer."

"How do you find the next Steve Jobs or @stevewoz? ... I don't know, I have tried and failed" says @stevewoz #GartnerSYM

At one point, the Gartner interviewers opened up a trunk onstage and handed him a series of objects from technology's past to comment on. He wound up rhapsodizing about a RJ45 network cable. While some might say its time is past, given the move to wireless communications, he said he had to pay the lowly cable a compliment. "Everywhere in the world, we've only got about two standards," he said, noting that electrical plugs and phone jacks are different from country to country, but Ethernet and WiFi are the same everywhere.

Echoing one of Gartner's conference themes -- the idea that we need to be "digital humanists" as well as technologists -- Wozniak said, "We have to get away from the technology being more important than us." One of the most exciting trends is how technologies like voice recognition are allowing technology to blend into the background, so that we interact with it in a more human way, he said. In addition to Apple's Siri, he mentioned IBM's Watson cognitive computer as an example of progress on that front. Now, he finds he is impatient interacting with a computer through the keyboard, finding it "too procedural in the way that the old DOS made us procedural."

Don't take sides: platforms aren't religions. You only have to convince yourself. @stevewoz #GartnerSYM

One aspect of the "cult of Apple" that Wozniak apparently doesn't buy into is the idea that its success was the result of Steve Jobs' demanding and sometimes intolerant style as a boss. One of the most important things about work is to enjoy the people you work with and laugh along with them, Wozniak said. You can compete and still be nice, he said. "Steve Jobs could even have been nicer in a lot of cases and still had great products. That's my own belief."

David F. Carr oversees InformationWeek's coverage of government and healthcare IT. He previously led coverage of social business and education technologies and continues to contribute in those areas. He is the editor of Social Collaboration for Dummies (Wiley, Oct. 2013) and ... View Full Bio
We welcome your comments on this topic on our social media channels, or [contact us directly] with questions about the site.
Comment  |
Email This  |
Print  |
RSS
More Insights
Webcasts
Unlocking the Ultimate Source of Truth in Cloud Security--Network Data
Don't Miss This Crash Course on Cyber Attackers
More Webcasts
White Papers
DevOps for the Database
Guide To Microsoft Security
More White Papers
Reports
How IT Security Organizations are Attacking the Cybersecurity Problem
Email Security Threat Report 2020
More Reports

The Ordinary crowd of Folks(those who are'nt very techno-savvy) fall into two groups as well.

One who just want something to be done quickly and easily(with Maximum Efficiency) and the other who want something which is cool (&has a WOW! Factor).

You have to design accordingly.

As long as our Basic foundation is reliable/Robust[The Internet here];we can build on that very easily and quickly.

Too much Complexity usually breeds Chaos and vulnerabilities in the whole Architecture-Something which we need to decisively avoid if we are to scale up Quickly and in a trouble free fashion.

If I could have said it any differently(to what you have put very simply and nicely here) it would be to Focus on User Functionality and Usability.

If you can solve these two issues you can be very-very rich!

That's a guideline more product designers could be true to. Often, people pitching enterprise technology can't explain the "why" of the want.
Reply  |  Post Message  |  Messages List  |  Start a Board

Very interesting perspective, especially the part about wifi and ethernet being a standard all across the world. I had not thought about that before.

It seems that newer technologies don't require so many complicated interfaces – which is really good for flexibility.
Reply  |  Post Message  |  Messages List  |  Start a Board

That is a great idea.  At this time, a technology that will easier to be used by the majority of the people and be cool will be the most successful device.  I think sometimes in engineering we are caught in realising a getting a device out instead of taking more time for evaluating, especially for the general population.
Reply  |  Post Message  |  Messages List  |  Start a Board

This is what I personally feel here that Engineers should split themselves up into Two groups;one that Designs products that they themselves find Cool and the other that makes things easier for the vast majority of Consumers around them.

Any Engineer who sticks to either of these approaches will be enormously successful in the Long run.

You just need to find out which approach you want to pursue first decisively!

Northwestern Mutual CIO: Riding Out the Pandemic Jessica Davis, Senior Editor, Enterprise Apps,  10/7/2020
White Papers
DevOps for the Database
SD-WAN or MPLS: Is it Time to Replace Your MPLS?
The Modern SIEM Evaluation Guide
How to Build Your Own CDN
Special Report: Edge Computing: An IT Platform for the New Enterprise