The Next Billion-Dollar IT Wunderkind

Tech's next big star will improve information value, information delivery or maybe both.
Imre Kabai
Contributor
September 27, 2013
"We are drowning in information, while starving for wisdom." -- E. O. Wilson

Most of us missed out on buying Microsoft in 1986, Apple in 1998 and Amazon.com in 2001. But it's not too late to catch the next rising tech star. The million-dollar question: Who is that next wunderkind going to be?

At the IT organizational level we can also ask ourselves: What emerging technology can we implement that will differentiate us from the others? Some companies try to beat the competition by implementing hot new technologies such as Vista and Itanium, only to see them become obsolete. Others play it safe, only to fall behind and later scramble to catch up with technologies such as virtualization, mobile device management and cloud applications.

The value of IT is rooted in the unique way the human brain works. For starters, information technologies and brains are very different. The brain is elastic, fuzzy, parallel, slow (kHz) and mixes processing and storage. Most information systems are rigid, digital, serial, fast (GHz) and use the Von Neumann Model of separating computing from storage.

The brain is incredibly dense and efficient, and it has a mindboggling information processing capacity. Transmitting a bit of information within the brain costs anywhere from tens of thousands to millions of electron volts of energy. The overall energy consumption of the brain is around 20 watts. The upper metabolic information processing limit comes to about 10 terabytes per second. To put this point into context: It's the same magnitude of data traveling on the Internet at any given moment.

In contrast to this vast data storm inside the brain, most "traditional" ways of information exchange, such as reading and speech, are ultra-low bandwidth, with speeds of a decabyte per second. There's about a 12 magnitude difference between the external and internal data flows!

Any information technology that broadens the transmission channel might be our Next Big Thing winner. Google Glass is a fundamentally good idea precisely because that's what it does -- it's a novel way of using the big capacity of the optical system and visual cortex.

The other amazing ability of the human brain is that it can develop intuition, which lets us make good decisions based on a large number of fuzzy inputs. The drawback of developing intuition is that it takes decades of hard work.

Computers are catching up in this area, but we still haven't seen a computer beat a Go master on a 19 x 19 table. IBM's Watson computer may not diagnose a patient better than an experienced physician, but it can provide valuable advice to the doctor. Information technology can make a big difference by augmenting human intuition.

Technology can make information more valuable (insightful, meaningful, relevant) or make it more accessible and timely (natural user interfaces, mobile). The "return on information" will be the product of these two orthogonal components: information value and information delivery. Even the best insight is worthless when delivered late, and low-quality data is irrelevant no matter how beautifully it's presented on the mobile device.

The following diagram shows how the product of the two components grows as we expand from high-definition digital signage displays to mobile wayfinding, and then to real-time location services. 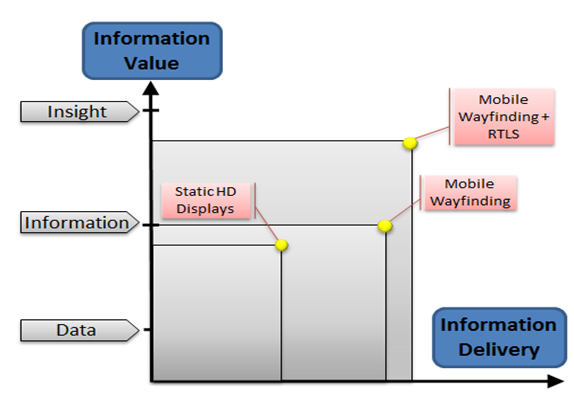 By mashing, combining, relating, aggregating and mining data, we can use it to gain more meaningful insight. That's how Google stole the search market from Inktomi. It's just the icing on the cake that the Googlers did it with such a brilliantly simple user interface, because the huge value of the information made the delivery less important. It's unfortunate that Google's organic unpaid search results now get only about 13% of the screen estate. While the relevance of the organic Google search results is high, they're diluted by the 87% of advertising content.

We can also enhance the channel that carries the information by making it more natural, rich and timely. Some of the past winners in this space include Twitter and smartphones with multi-touch interfaces.

So here's the recipe for finding the next wunderkind: Look for a novel technology idea that has the potential of significantly improving either information value or information delivery, or possibly both.

Good luck with your next IT bet.