When it comes to assessing the leading IT vendors, our survey shows some significant shifts between 2010 and 2012. Among those vendors on the steepest decline in the eyes of the IT pros we surveyed are Research In Motion, Hewlett-Packard, Nokia, even SAP. On the steepest ascent are Apple and Samsung.

Among non-U.S. IT vendors, Samsung's stature rose the most since 2010. Only 39% of respondents considered Samsung No. 1 or No. 2 in its sectors in 2010, but 61% designated it as a sector leader this year, as it gains market share in smartphones and provides a compelling iPad alternative in tablets.

IT pros' attitudes about the two countries that provide the biggest IT threats to the U.S. have flip-flopped in two years. In 2010, 44% of survey respondents cited India as the biggest threat to U.S. technology leadership, but only 33% cite India this year. In contrast, 42% of respondents cited China as the biggest threat to U.S. technology leadership in 2010, but that percentage shot up to 54% this year, as China took on more and more IT R&D work, some of its major IT vendors (Lenovo, Huawei) grabbed a higher international profile, and Chinese interests were accused of trying to steal IT intellectual property from U.S. and other vendors.

What Others Are Saying

Beyond InformationWeek's research on IT-based innovation, several organizations recently issued their own reports on the subject, offering mixed conclusions.

A 160-page report released by the U.S. Commerce Department in January argued that the U.S. is slipping when it comes to innovation. It made the case for aggressive federal government investments in basic and applied research, STEM education, regional entrepreneurial "clusters," and other areas in order to raise the U.S. standing.

The 2011-2012 Global Competitiveness Report by the World Economic Forum ranked the U.S. fifth among 142 countries, the third year in a row the U.S. ranking fell (it was fourth last year). The forum's analysis goes beyond science and technology competitiveness, factoring in broader educational, labor, legal, market, and other factors. Outranking the U.S. were Switzerland, Singapore, Sweden, and Finland. Another report from the forum released earlier this year ranks the U.S. eighth among 142 countries in what it calls network readiness: broadly, its ability to leverage its broadband infrastructure for competitive advantage.

A report released in March by the Information Technology and Innovation Foundation and the Ewing Marion Kauffman Foundation ranked the innovation policies of 55 countries across seven core areas: trade and foreign direct investment; science and R&D; domestic market competition; intellectual property rights; information technology; government procurement; and high-skill immigration. Their Global Innovation Policy Index ranks each country as upper tier, upper midtier, lower midtier, or lower tier on each of the seven policy areas. Only Canada and Singapore placed in the upper tier for all seven indicators, while the U.S. placed in the top tier for every one except openness to high-skill immigration.

While most IT pros agree that the U.S. needs to take steps to improve or maintain its standing as the leading global IT-based innovator, there's no consensus on how much the government needs to get involved. The authors of the ITIF-Kauffman report were careful to distinguish between government-orchestrated "industrial policies" that favor certain companies and technologies, and what they see as more productive policies that "support" industry players. But that's a slippery slope. 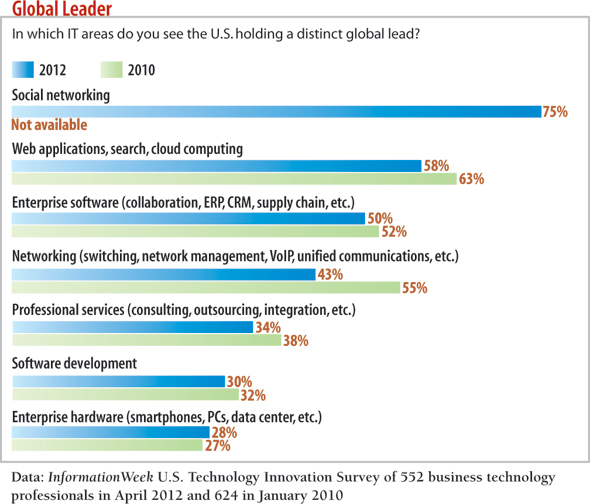 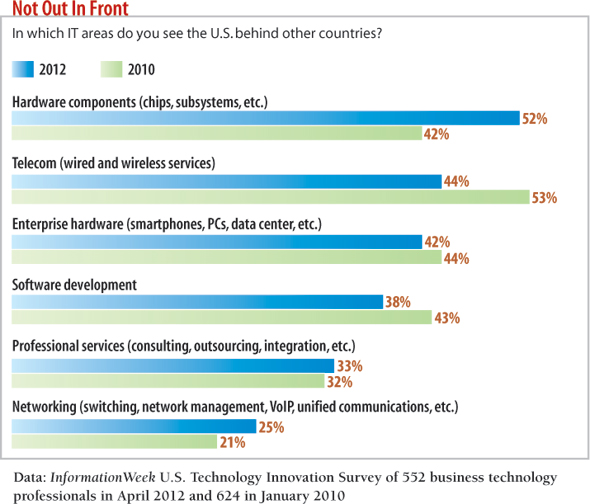