Why The Maker Movement Matters To Your Business - InformationWeek

Chris Anderson has found success in what's known as the Maker movement, and he's sure that encouraging the freedom to tinker at work will deliver rewards for any company.

It all started with a lawn sprinkler and a grandfather who couldn't leave well enough alone.

The grandfather, a German machinist who built a career in Hollywood movie studios, also built (and patented) an automatic lawn sprinkler system. He passed both his story and his love of building things on to his grandson, Chris Anderson, who included both in his most recent book, Makers: The New Industrial Revolution (Crown Business, 2014). The book looks at those people driven to make things in the "real world" -- that is, the world of atoms rather than bits -- and how things have changed for those people since the days of Anderson's grandfather.

Nicholas Negroponte, founder of the MIT Media Lab, was the first to talk extensively about the difference between those who deal in atoms and those who make their living with bits. At the time he was writing, atoms seemed the medium of the old world: The future would be written in bits.

In an interview with InformationWeek, Anderson discussed the ways in which the tide has turned to bring atoms back to an even footing with their digital counterparts. "3D printing is sort of the ebb and flow between atoms and bits. The world is atoms, we scan it and turn it into bits, and then through 3D printing we can turn it back into atoms," he said. "We can seamlessly move from the physical world to the digital world, from atoms to bits, and the core of this new industrial revolution which is the combination of the physical and virtual, rather than the purely digital realm of the Web."

[ Want to hear directly from Chris Anderson on why IT should care about drones? See Anderson in person at the InformationWeek Conference April 27 in Las Vegas. Register now. ]

The return to atoms represents a huge change in the public's relationship to building things that they can touch. These changes -- in the technology available to manipulate atoms and the skill required to use it -- mirror the changes that accompanied the introduction of the personal computer in the late 1970s and the development of the World Wide Web in the mid 1990s. Dramatically less specialized knowledge is required to begin seeing minimally acceptable results from technology that is much simpler to use than its industrial antecedents. 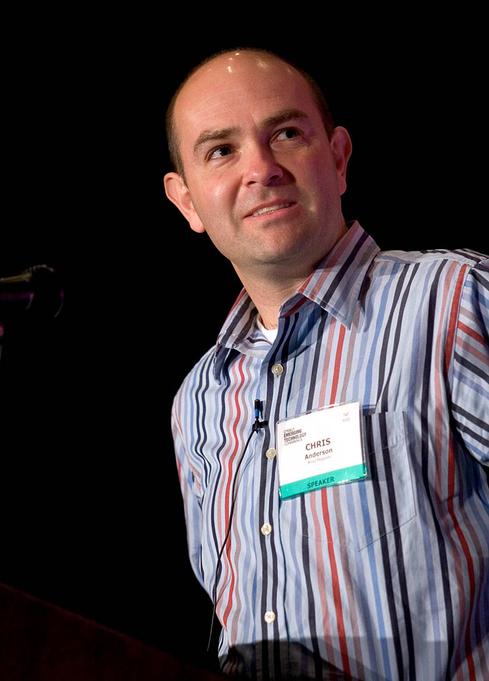 (Image: "Etech05 Chris" by James Duncan Davidson from Portland, USA, via Flickr licensed under CC BY 2.0 via Wikimedia Commons)

In our interview, Anderson said, "It's now possible to work with hardware -- electronics and physical materials -- the way you work with software. The desktop tools are for everyone."

One of the lessons Anderson writes about in his book is that the new world of manipulating atoms means that you no longer need to own sophisticated production systems in order to produce sophisticated objects. "Desktop prototyping" and the spirit of physical experimentation that accompanies access to the prototyping tools are wrapped up in the Maker Movement -- a movement that Anderson describes in his book as having three transformative characteristics:

These characteristics, and the difference between the industrial world they describe and the industrial world of his grandfather, are the foundation of the stories Anderson tells in his book -- stories that he illustrates with examples from 3D Robotics, the company that he co-founded and now runs.

Next Page: Taking 3D Robotics from concept to company.

@Curt most definitely. There cannot be much innovation without that freedom. Those who are afraid to fail will stick with the tired and true rather than going out on a limb with something different.
Reply  |  Post Message  |  Messages List  |  Start a Board

@Ariella, this is one of the reasons that modern electronics make things a bit more difficult for curious young people: When I was young, television sets were filled with discrete components that could be removed, studied, and used for new projects. Now, it's much more difficult with electronics, which is why (I think) so many young folks are intrigued by motors, gears, and other things that can still be pulled from their family cast-offs.

I'm a huge fan of the "freedom to fail." Just because something doesn't work the way you hoped doesn't mean that the project is a failure -- it just means you learned a different lesson than you planned. And that's OK!
Reply  |  Post Message  |  Messages List  |  Start a Board

@Curt that is really cool. Some really curious kids do that on their own, but they sometimes don't get things to work when they put them back together. One of my teachers told a story about someone else's kid who took apart the vacuum cleaner. Happily, he was able to put it back together in a functional way. But other people have recounted that when they tried to put things back, they always had a piece or two left over. Still, learning through doing and manipulating is very important.
Reply  |  Post Message  |  Messages List  |  Start a Board

@zerox203, I absolutely want a 3D printer (my dear wife wants to make sure that whatever we get will print in sugar and/or chocolate), but I also want to make a milling machine or get a laser cutter. I'm not sure how I'm going to afford an Epilog, but they're mighty cool.

The fact is that there are all sorts of neat tools available: Learning which ones work to help you do what you want is part of the learning experience -- and the fun. I truly think we're just getting started.

And thanks for the kind words about the article!
Reply  |  Post Message  |  Messages List  |  Start a Board

@Ariella, one of my favorite parts of the Orlando Maker Faire was a section filled with old computers, printers, and other devices. A local surplus company provided all the devices and a bunch of tools: It was a kid's area where little folks would (with their parent(s)) take apart cool things to see what was inside. It reminded me of one of my favorite things to do as a youngster, and a great way for kids and their parents to spend time together.

There's no way to replicate that on a screen. Kids need to have real things in their hands whenever possible.
Reply  |  Post Message  |  Messages List  |  Start a Board

"3D printing is sort of the ebb and flow between atoms and bits. The world is atoms, we scan it and turn it into bits, and then through 3D printing we can turn it back into atoms,"

That's a great quote, and it really hits on the the missing component of doing everything digitally without the 3D experience. Certainly, I think it is a loss for young children to be placed in front of tablets and computer screens where their actions are limited to a 2D world with its limited sensory range.
Reply  |  Post Message  |  Messages List  |  Start a Board

@Brian.Dean, Chris talks about a couple of things that are critical: We're removing the requirement for people who want to make things to become experts in industrial-scale machine control, and by doing so we're making niche markets economically accessible.

A good example of the latter is the rise in creativity we're seeing in prosthetics for children. From multi-thousand dollar medical devices that only fit for a few months we've watched university students design prosthetics that can be printed by local clubs for a few dollars. It's improving the lives of young people and improving the communities in which the makers and the users live. I call that a win-win-win!
Reply  |  Post Message  |  Messages List  |  Start a Board

@Stratustician, I agree that one of the keys to the maker movement is accessibility. I've long been around people who went around to industrial auctions buying things like turret lathes and vertical milling machines, but putting them to use meant putting in significant time to learn the specialized skills necessary. Now, artists, craftspeople, students, and hobbyists can cut straight to the "making things" part without having to eat a massive (and steep) learning curve.

I'm very excited about the movement and where it can go. I think we've only begun to see the developments that are going to come out of all these tools being put in enthusiastic new hands.
Reply  |  Post Message  |  Messages List  |  Start a Board
InformationWeek Is Getting an Upgrade!