In this BYTE article from May 1977 Stephen Wozniak describes the hardware and system software in the then brand new Apple II. Circuit diagrams and BASIC listing are included. 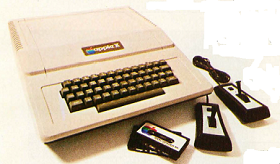 To me, a personal computer should be small, reliable, convenient to use and in expensive.

The Apple-I, my first video oriented single board computer, was designed late in 1975 and sold by word of mouth throughout California and later nationwide through retail computer stores. I think that the Apple-I computer was the first microprocessor system product on the market to completely integrate the display generation circuitry, microprocessor, memory and power supply on the same board. This meant that its owner could run the Apple BASIC interpreter with no additional electronics other than a keyboard and video monitor. The Apple-I video computer board was originally intended as a television terminal product which could also operate in a stand alone mode with out much in the way of memory, although it did have a processor, space for 8 K bytes of 4 K dynamic memory chips, and its shared video generation and dynamic memory refresh logic. Apple- I was sold as a completely assembled and tested processor board with a price under $700 at the retail level.

The latest result of my design activities is the Apple-II which is the main subject of this system description article. The Apple-II builds upon this idea by providing a computer with more memory capability, a read only memory (ROM) BASIC in terpreter, color video graphics as well as point graphics and character graphics, and extended systems software. 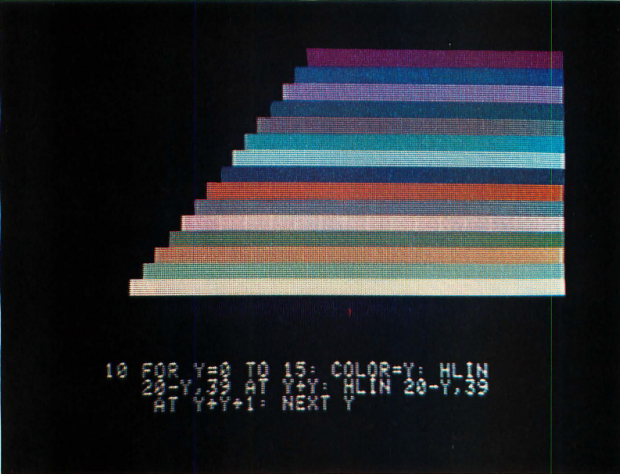 Photo 1: A color test chart showing the 75 shades of hue available from the Apple-II as presented on a typical commercial color set, using one of several RF modulators available on the market. The Apple BASIC program used to generate this color is shown in the text portion of this split screen (graphics and text) display.

A key part of the Apple-II design is an integral video display generator which diectly accesses the system's programmable memory. Screen formatting and cursor controls are realized in my design in the form of about 200 bytes of read only memory which are built into the Apple-II's mask programmed 8 K bytes of read only memory. A 1 K byte segment of the processor's main memory is dedicated to the display generator, although it is also accessible to programs. The display transfer rate is the time it takes to fully define the contents of this segment of memory, and averages about 1000 characters per second, limited primarily by the software scrolling routines in the system read only memory, 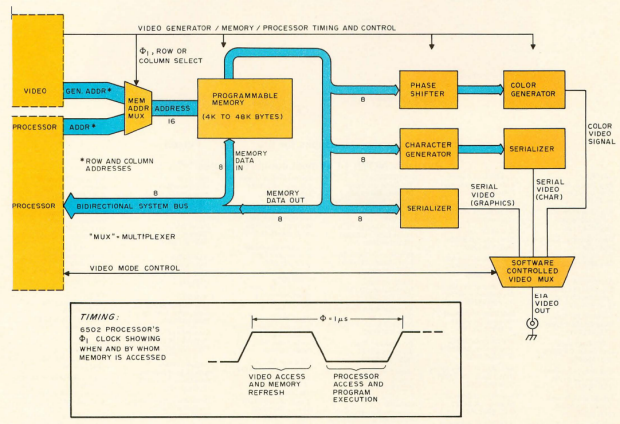 Figure 1: A block diagram of the Apple-II display generator. The generator sneaks into memory on the externally unused phase of the 6502 processor's 2 phase clock. The output of the memory is processed (after a I clock cycle delay) to produce a net video output through a software controlled video multiplexer. The three major modes of operation are:The timing diagram shows how the basic 1 μs processor cycle period is split up into a video memory cycle and a microprocessor memory cycle. Since the processor is engaged in internal housekeeping operations during the first (high level) half of a φ1 period, this segment of time can be used by the video generator to sneak into memory. Since all of memory is continuously being scanned by the low order bits out of video generator, the entire 48 K byte field (maximum) of dynamic memory is refreshed by the video portion of the cycle. (Refreshing of dynamic memory means scanning through all possible low order addresses to recharge the internal memory capacitors of the chips.)

Since the Apple-II incorporates this display generator as a part of its design, its text mode becomes the terminal for the system. The display has 24 rows of 40 characters displayed on an ordinary black and white or color television screen. Each character in the Apple-II design is a 5 by 7 dot matrix, so the present version of the system only implements upper case characters of the 6 bit ASCII subset, as well as the usual numbers and graphics ava il ab le in sta ndard character generator read only memory parts. Assuming that the video display is the currently assigned system output device, the display is accessed through our system software in read only memory by using a subroutine called COUT which adds text to the screen using an automatic scrolling technique. This is typical of the many read only memory routines which I've incorporated into the ROM to provide complex features with relatively simple user interfaces. Another example of such a software feature is a user definable scrolling window. This means that the user of the system can pick any of four coordinates defining any rectangular subset of the viewing area of the video screen as the current scrolling zone. The remainder of the display will remain frozen and data in the window will scroll normally when COUT is accessed. This is a most useful feature: For example, the user can set up a game background or instruction menu in one part of the screen while using the remainder of the screen for scrolling the variable data.