As Bill Gates packs up his "#1 software architect" mug and prepares to leave his daily duties at Microsoft, we take a look at the character traits that put him on top of the software industry.

It takes a certain set of character traits, personality, and drive to build a company into a global software powerhouse. Over the years InformationWeek and other media outlets have done their best to examine the complex man behind the Microsoft empire.

Now, as Microsoft co-founder and chief software architect Bill Gates prepares to leave his day job to spend more time on the work of the Bill and Melinda Gates Foundation, we take a look back at the features and quirks that propelled him to the top of the software industry. 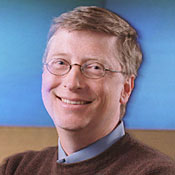 Toughness In The Conference Room

One year ago, InformationWeek's John Foley wrote about Gates:

As he moves beyond Microsoft to throw his energies into philanthropy, Gates will be remembered as an inspiring technologist and brilliant businessman who jump-started the commercial software market and populated the world with nearly a half-billion PCs, unleashing a wave of personal creativity and productivity on a scale never before seen. Gates' postretirement biography will have its share of ugliness, too -- a decade-long spat with the open source community, monopolistic business practices that culminated in a U.S. government-led antitrust trial, buggy software that was easily exploited -- but those will be footnotes when all is said and done.

Microsoft's success has its roots in Gates' leadership. He has been determined, persuasive, and intimidating.

"The story of how Gates leveraged IBM's desperate need for a PC operating system into a billion-dollar business is a case study in carpe diem, a Horatio Alger-style tale of pluck and luck," wrote InformationWeek's John Soat last year, in "Bill Gates' Legacy: Winning Through Intimidation".

Barbara Darrow, a veteran Microsoft observer who covered the company for years, agrees, "It's said that Microsoft was built on innovation and coding, but really it was outlawyering IBM."

If he is unyielding in the boardroom, Gates has the ability to accept good advice when it behooves him. "He used to be a terrible public speaker," said Darrow, who has interviewed Gates twice. "And he can be extremely moody, but Pam Edstrom and Melissa Waggener [of Waggener Edstrom Worldwide] pushed him around a little in areas where he wasn't confident."

Early on he accepted training to become "less cantankerous. He's shown that he's willing to take direction from people who know things he doesn't," explained Darrow.

Gates' riches are legendary. He has been at or near top of the Forbes 400 list every year since 1993. A year ago he lost the World's Richest Man title to Mexican telecom tycoon Carlos Slim. When the Gates fortune slipped to $58 billion in March, Forbes dropped him to the number three spot on its list. But his extraordinary financial power and influence reach far beyond his own assets. In 2006, Gates' friend Warren Buffet announced a $31 billion gift to the Bill & Melinda Gates Foundation.

The money aura surrounding Gates floats both upward and downward. From time to time, items featuring Gates or having belonged to him have been auctioned on eBay. DVDs of Gates' 1998 deposition in the U.S. Department of Justice's case, U.S. v. Microsoft, were put on the block in 2005. As was a 1990 Lexus purported to have been his.

After 33 years at Microsoft, will charitable work be enough to keep Gates challenged? InformationWeek's Alex Wolfe doesn't think so.

Sometime after he retires from Microsoft (NSDQ: MSFT), when being a world-class philanthropist begins to get a wee bit boring, Bill Gates will run for public office. And he'll win... What better way for Gates to cement his legacy than to use the bully pulpit afforded by Senate? He'd have a perfect pipeline to the general public, through which to talk about his pet causes -- AIDS prevention, the development of better child vaccines, and education.

Or maybe he won't. Last spring, former Microsoft executive Charles Simonyi hitched a ride aboard a Soyuz rocket for a 10-day mission to the International Space Station. Rumors that Gates would follow quickly orbited Redmond after Russian cosmonaut Fyodor Yurchikhin blurted in a live interview, "Charles said that Bill Gates is also preparing to visit space." So far, it's still only a rumor.