How To Be A CIO And A Woman

You don't have to choose between being a tech leader and a woman, some powerful role models declare. Is there any more powerful message to young women considering IT careers?
Laurianne McLaughlin
Editor-in-Chief, InformationWeek.com
April 25, 2013 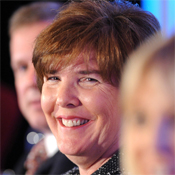 Karenann Terrell, CIO of Wal-Mart, isn't a formidable female CIO. She is a formidable CIO, who is also a woman. And as she and some fellow IT chiefs spoke to about 500 attendees at a Michigan Council for Women in Technologyleadership event this week, they modeled something still quite rare -- being comfortable in your own skin as a woman and an IT leader.

Terrell came to share her wisdom on managing tech talent, on a leadership panel that I moderated. She was joined by Kim Hammonds , CIO for The Boeing Company; Sheila Jordan, senior VP of communication and collaboration IT at Cisco Systems; Bridget A. Van Kralingen, IBM's senior VP of global business services; and David Behen, CIO for the state of Michigan.

Talent is not a "women's issue." Developing and managing talent is a top concern for every IT leader. CIOs tell me repeatedly of their struggles to find the right mix of people and then keep them from hopping to rivals. That's one reason that the Big 3 Detroit automakers -- GM, Ford and Chrysler -- sponsored this event and their CIOs participated, to discuss developing the next generation of talent.

As I looked out at the audience of about 500 people, at least two-thirds female, eager to help each other move their careers forward and encourage girls to study science and math, I felt inspired. Perhaps the panelists felt inspired too -- because they got unusually candid with this audience about the pressures and hurdles that women often experience in tech.

[ For more lessons learned from the event, see our related article: Women In Tech: Career Advice From Elite Execs. ]

For years, women in tech, and in many other professions, were coached to play down the very fact that they were women. Terrell and her fellow panelists encouraged women directly to let go of that notion.

I am a woman, Terrell told them, and that will never change. Work-life balance is a "myth created to make us feel a bit guilty," Cisco's Jordan told them. You will feel certain unique pressures, Boeing's Hammonds told them. You will face certain hurdles, IBM's Van Kralingen told them. But you don't have to pretend that you are not a woman, or that those realities don't exist.

For instance, women often still face more pressure to be the default caregiver in the family, whether you are talking about kids or aging parents. It's one reason many women intentionally get off the career train, and the number of female candidates for top IT positions decreases the higher you move up. (There are other reasons, of course.)

"It's OK to look at women as primary caregivers with flexibility," Terrell continued. "And when you do a flexible environment, it's good for everyone."

Terrell shared ways in which she advocates for and develops other women in her organization, for instance, creating retention tools such as mentoring circles, where women can get together with 20 peers inside Wal-Mart.

As a member of the audience brought up during the Q&A session, women have traditionally lacked strong female role models in IT. That does not help with retention, either. As this audience member put it, she is a minority and she is female, and she does not see enough people who look like her in either regard as she looks up the chain in her company.

Boeing's Hammonds advised her not to focus on being the only woman in the room.

"I think it's really important to focus on the results and the outcomes and how you're doing the work," Hammonds said. "That's what people will be looking at ... and I think it's important to find role models that you look up to. And sometimes you're going to look up, and there's not going to be anyone there. You just have to stay strong and focus."

Hammonds started her career at Ford on the engineering side. She was working on chassis systems, she told me, when a mentor encouraged her to take the leap to IT. She did, then she leapt to IT roles at Dell and Boeing, before Boeing elevated her to CIO. She's not talking in the theoretical sense when she shares this advice.

"I grew up in a place where I remember being in engineering meetings and being the only woman," she told the audience member. "I can relate to what you're saying and I wouldn't harbor negativity around that -- you have to turn that into an opportunity and push through it."

And that, right there, is being comfortable in your own shoes as a woman in IT. Hammonds didn't pretend it was easy, but she did model for this audience that it can be done. In Hammonds' case, those shoes have high heels, and they suit her.

Hammonds went on to say that supporting her team members, male or female, through life transitions like caring for a sick parent isn't just a talent retention tool, it's the right thing to do.

All of the panelists displayed a real fire for attracting more women to IT careers -- as Terrell explains, the U.S. will simply have to do so if it wishes to remain competitive globally. That talent pool is necessary. That is also a mission of MCWT, the group that organized this day's event.

Terrell has studied this issue in depth and she told me there are two times when the numbers of girls studying science and math drop dramatically: around the eighth grade, when bullying kicks in, and then from freshman year through senior year of college.

Part of changing that dynamic will mean showing young women the examples of women like Terrell, Hammonds, Jordan, and Van Kralingen -- who show that you can be both an IT leader and a woman.