10 Social Business Leaders for 2013
(read about them all)
The Teambox collaboration tool is adding a video-chat service at no additional charge.

Teambox is known as one of the social collaboration tools that emphasizes project coordination and task management. Stronger in markets like higher education, Teambox is affordable for small businesses and starting to gain a foothold in larger enterprises, adding customers like US Airways and Toyota.

On Wednesday, Teambox announced it is incorporating the Zoom video and screen sharing service, including the ability to schedule and launch video calls that can include up to 25 participants from within Teambox. "We're offering this at a price that we think is disruptive, well below the entrenched players," Teambox CEO Dan Schoenbaum said in an interview prior to the announcement. "A lot of our customers are paying hundreds of dollars per month for GoToMeeting or WebEx." The introduction to Zoom came through a common investor, he said.

For an initial two-month promotional period, even users of the free accounts Teambox offers will get unlimited use of the video service. Thereafter, Teambox's paying customers will get up to 100 hours of video calling at no additional charge. New Teambox users who sign up for a free account will probably also be offered a free trial of the video component, although the details haven't been worked out yet.

[ What should you do when you get a LinkedIn request from someone you don't know? LinkedIn: When To Say No To Connecting. ]

"Having video chat integrated with the project management system is something that's really attractive," said Adam Lieb, CEO of Duxter, a social network for gamers and a Teambox customer. His group got early access to the video service and has just started using it. Project teams often wind up with a bunch of disparate technologies for different types of collaboration, "and that causes its own problems," he said. "With this, there's one less login, one less website, one less client to deal with." 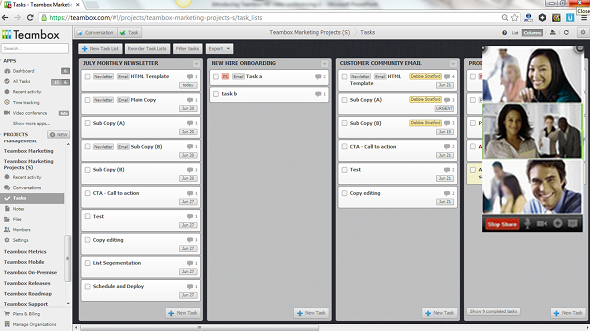 A videoconference launched from Teambox.

The initial level of integration allows Teambox users to schedule and launch video calls from within the collaboration tool, but the video app launches in a separate window. Schoenbaum said the next step will be to integrate video within the navigation scheme of the Web app. Similarly, Teambox is promising to build video into future versions of its mobile app. Currently, Teambox users can participate in calls using the Zoom app.

A basic version of Teambox is free for teams of up to five people. Paid accounts are $5 per user per month in the cloud. Teambox also offers an on-premises deployment option for organizations that want to keep collaboration within the firewall.