Tesla Motors' plans to introduce a battery that can be used for home and office energy storage lends credence to a burgeoning industry that is transforming the way we consume power.

Tesla Motors wants to bring its battery technology to a home or office near you -- and it's not the only company looking to do so.

Wal-Mart, BJ's Wholesale Club, and BMW are among the enterprises working with renewable energy companies to change their power consumption practices.

The Internet of Things (IoT) is raising awareness of how home and office batteries can be used in conjunction with the electrical grid to manage energy loads. IoT is also accelerating the race to develop more robust battery technology. Suddenly every device has the potential to provide data on its power consumption and to adjust its behavior if necessary. Smart meters begin to make sense in the context of smart phones, smart homes, and smart infrastructure.

Tesla Motors CEO Elon Musk announced his intention to unveil a Tesla home battery for use in residences and businesses during his company's earnings call on Feb. 12. "We have the design done and it should start going into production probably about six months or so," said Musk.

Small batteries are already abundant in many homes, but they're designed for powering mobile phones and other gadgets. Musk has something more ambitious in mind: A battery suited to the demands of the energy grid.

Tesla Motors, which plans to invest about $2 billion in its battery Gigafactory near Reno, Nev., may be able to change the dynamics of the energy industry, particularly if its batteries can make distributed power storage more affordable, more efficient, and relevant beyond electric vehicle owners. A handful of battery technology companies -- including Alevo, Ambri, Aquion Energy, Eos Energy Storage, Exergonix, and Urban Electric Power -- share that ambition. 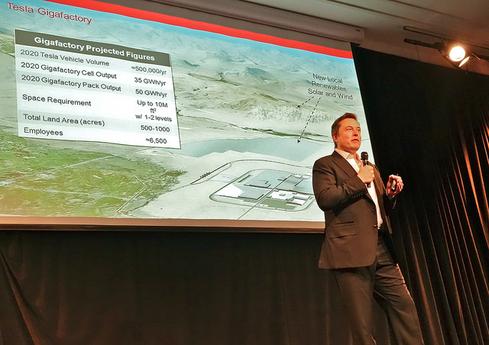 Presently, the generation, distribution, and consumption of electrical energy occurs in near real-time because we haven't developed the technology for cost-effective grid-scale storage. As a consequence, power companies have to maintain generation capacity for peak power consumption, capacity that goes underutilized at off-peak times, and that often relies on non-renewable sources of energy.

As MIT professor Donald Sadoway put it in a 2012 TED presentation, "... the fact is that today there is simply no battery technology capable of meeting the demanding performance requirements of the grid -- namely, uncommonly high power, long service lifetime, and super-low cost."

Dan Wilson, a renewable energy and energy efficiency consultant at Black & Veatch, based in Overland Park, Kan., said in an email to InformationWeek that the issue isn't quite as stark as Sadoway suggested. Many battery vendors, he said, would argue that there are applications today where battery storage makes technical and economic sense.

Batteries to Optimize the Grid

"Batteries have reached a point now where they have major implications for all industry stakeholders, and as battery costs and performance keep improving, their impact will only grow," Wilson said. "... Widespread adoption of battery storage has the potential to fundamentally change the dynamics of the electric utility industry, but the pace of that adoption is very uncertain (and the current installed battery capacity is relatively small), so we will have to wait and see just how quickly it becomes mainstream."

Among customers of SolarCity, a provider of solar energy systems for businesses and residences, batteries are becoming more common. "We're heading toward a future where storage is frequently paired with rooftop solar," said Will Craven, director of public affairs with SolarCity, in an interview with InformationWeek. "American homeowners have been really successful in deploying clean energy assets across the grid. What battery storage is going to do is optimize that energy for the grid and the consumer."

In late 2013, SolarCity introduced DemandLogic, energy management software that works in conjunction with batteries designed by Tesla. (Musk is a cousin of Solar City's founders and serves as board chairman.) The technology helps businesses automate the discharge of stored energy in order to mitigate price spikes. It's currently used by Wal-Mart and BJ's Wholesale Club.

Wilson observed that electric vehicle infrastructure has the potential to help or hurt utilities. That depends on whether utilities are involved in the placement and installation of charging stations, and whether they have some idea when and where vehicles are being charged.

In recent years, various vehicle-to-grid trials have tested how electric vehicles can help with energy load management. In January California utility PG&E announced a plan to work with BMW to manage 100 kilowatts of electric demand through a demand-response program -- an initiative to reduce energy use when demand outstrips supply. BMW plans to do this by harnessing

One aspect of this I didn't explore was the ambivalence of utilities about this. On the one hand, a more distributed grid will help limit times when demand outstrips supply. On the other hand, the rules that govern utilities encourage them to pursue business as usual, because infrastructure costs can be recouped in billing. Accepting a more distributed power distribution model could reduce the power of power companies, and that's not an appealing scenario for many of them.
Reply  |  Post Message  |  Messages List  |  Start a Board
InformationWeek Is Getting an Upgrade!