The Fall Of The Messiah Leader - InformationWeek

50%
Tweet
Many CEOs create an illusion of control, but heroic, charismatic leadership in the context of large public companies is mostly a myth.

In the first part of this series, we looked at how the lower three layers of the "manager mind" emerged: Management by Process (MBP), Management by Exception (MBE), and Management by Objectives (MBO). We also looked at how, by the dawn of the Internet era, the three-layer stack was struggling to cope, with managers constantly fighting fires and spending most of their time in the MBE layer.

This time we'll look at the rise in the 1980s and impending fall of the idea of "Leadership" as a pop business construct. The role of visionary leader emerged to make up for the apparent failure of the manager mind, but it evolved into something very different, illustrated in the picture below: a role dedicated mainly to creating and maintaining an illusion of control in the markets interspersed with occasional Big Bold crisis management moves that generally fail.

The brief story of "leadership"--a mere two decades--is only a small chapter in the story of professional management, but it's an important one.

As markets became increasingly unpredictable, and MBE functions began to swamp MBO functions (often referred to as "constant firefighting"), a culture based on pure "management" began to crumble entirely.

Companies were not thriving on chaos. They were mostly succumbing to it. The beleaguered manager couldn't cope with the three-layer stack of functions. As we will see, this was mostly a scapegoating. Their failure to cope was largely the fault of executive leadership. 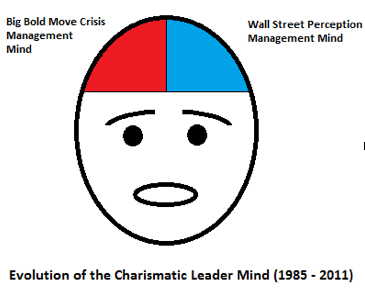 But back in the late '80s, managerial failure seemed to logically point to pure managerial incompetence. The stage was set for a Messiah figure.

Welch was the first modern example of "charismatic leadership," and his was the first widely recognized business name since the robber barons. I challenge you to name, off the top of your head, one "celebrity" business name between Rockefeller and Welch that the average man on the street would have recognized. The decades between saw a parade of non-celebrity senior managers who were not very well known outside their own companies and industries. It's telling that the term CEO gained currency during the '80s, displacing older terms such as president. The Charismatic Leader and his coterie needed to inhabit a layer that was not just above ordinary manager, but also conceptually distinct from it.

"Leadership" was a curious construct and is still somewhat disreputable academically. And with good reason. It's the idea that one savant-like figure can intuitively read market conditions, spot brilliant strategic opportunities, create clarity of purpose in pursuit of that opportunity, and steer by an innate sense of True North, without a compass.

Oh yeah, and while performing this miracle routinely, the leader also models virtues and values that would put saints to shame. This idealized leader sparks a pursuit of corporate greatness with a brilliant strategic insight every few years, and he ensures that the pursuit is conducted in accordance with values so noble you feel like writing epic poems in his honor.

These charismatic figures are supposed to be capable of intuitively cutting through complexity and producing visionary decisions that make the managers' jobs tractable again.

Yes, I believe charismatic leaders are often (but not always) founders. Jack Welch is the original counterexample of course.

You may be right that they accompany the "next big thing" but in every wave, I suspect the charlatans will outnumber the genuine ones, because it is so much easier and more lucrative to fake charisma than to be substantially great.
Reply  |  Post Message  |  Messages List  |  Start a Board