The Mac Emperor Has No Clothes - InformationWeek

Yeah, I'm a Windows guy, but I've worked with Macs on and off a long time, probably longer than you. I keep hearing vague reassurances that the Mac is so awesomely amazing and I'll fall for it, but I'm just not feeling the love. It couldn't really be that the Mac is overhyped and overpriced, could it?

When I started here at Byte one month ago today the excellent IT department asked me if I wanted a Windows or Mac notebook. I own a lot of computers and none of them are currently a Mac, so I said Mac. I should have one and be current on them. From very early on my 15 inch MacBook Pro has disappointed me. I've tried this many times in the past and it's always been the same.

Macs are nothing new to me. I worked on the original pre-release Mac in 1984 at a now-defunct software company. It wasn't really my project, but everyone tried working on it. You've read this story before: the original Mac was such an underpowered toy that you had to write your code (all in Pascal in those days) on a Lisa—the only people who ever bought a Lisa were developers—cross-compile it and transfer it to the Mac on the blazingly-fast RS-422 cable. This kind of arrangement makes debugging an immense pain.

Over the years, in testing, development and just plain user stuff, I've tried using Macs. Plenty of friends—people I sincerely respect—tell me how superior they are to Windows, how much better both the computers and the operating system, even the applications are.

I just don't see it. 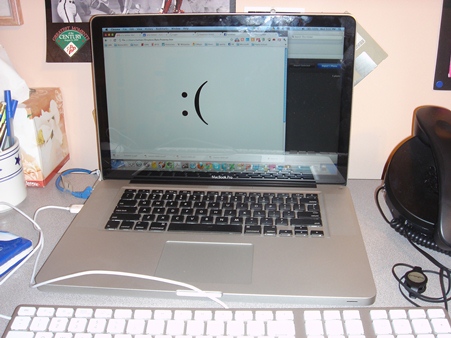 There are a few points where I'll say that the Mac is great. The biggest of these is battery life. I've never seen anything like the battery life on my MacBook. I don't know what they're doing different from every Windows notebook I've used, but it's better. When I go out with it I don't usually even bother to bring the power brick. There are a few little things: Installing a printer driver couldn't possibly be any easier than it was on the Mac, but it's not really much more complicated on Windows 7.

Most of the real problems I've had are confusion because, I have to admit, I'm very used to Windows. A lot of things the Mac just does differently. Nothing wrong with that, but nothing better about it either. It's hardly a reason to pay several hundred dollars more for a computer.

"It Just Works"—I've heard that for years, but it doesn't just work for me. I recently had to copy the contents of an external hard drive to my Mac, a process which should have taken one click-drag operation and a wait for several hours at most. Instead I found myself running into errors:

This operation can't be completed because an unexpected error occurred (error code -8084).

I did a lot of digging online and found no helpful information, certainly not on apple.com. I'm told that Apple stopped documenting their error codes when they shipped OS X. From my own experimentation I think the source of the errors is that the external hard disk was formatted NTFS and there were some permissions set on files and, in at least one case, a file was encrypted with NTFS encryption. I would be somewhat forgiving of OS X if it put out an error message that said it couldn't read a particular file or directory because of permission problems, or because it uses unsupported file system features, or even that it encountered an unexpected error while reading this specific file. And by the way, I would appreciate if it continued the copy operation instead of aborting.

I ended up having to copy the hard disk to a PC and then copy the files back to the Mac on flash storage in several trips. Yeah, it just works