The lingo or jargon you use in analytics or IT or business management is part of what makes you part of a culture. Here's a deeper look at the reasons why we use jargon. 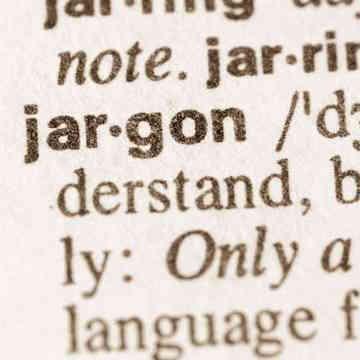 Rebalancing, off-boarding, and streamlining are examples of business jargon. Jargon refers to professional, trade, or industry expressions. Typically these expressions are unintelligible to people outside of the community of practice. As it relates to the business community, here are five examples of jargon from Scott Adams' Dilbert strip.

So why do we use business jargon? We use it because, sociologically, language is a function of the human group experience. And to that extent, business jargon has three primary social functions. First, it serves as a boundary maintenance mechanism. Being cognizant of the latest and greatest phrase distinguishes the professionals from the non-professionals. Part of the human experience is that we feel affirmed and valued when we think that we have special knowledge. Making access to knowledge parochial can make one feel superior. It suggests that only members of the 'in-group' understand what is being said; everyone else is part of the 'out-group'.

Second, we use business jargon as a method of truncated but efficient communication. Instead of using elaborate sentences, often a short phrase is sufficient to share an idea in a manner that is easily understood by the listener. The implied assumption is that one should be smart enough to decode the metaphors and atypical grammatical constructions.

Third, business jargon serves as a weapon of mass distraction. There is an old expression that says in substance that 'If you cannot dazzle your audience with your brilliance, then you must baffle them with your bovine fecal matter.' Here is where the true value of business jargon comes into play. Part of the human experience is to be reticent about asking questions in a didactic setting for fear of being labeled as dumb for asking what obvious to everyone else. Hence, when one needs to create the perception of expertise (William Isaac Thomas, an American sociologist, said that "things perceived as real are real in their consequences") you simply pepper the audience with jargon. The fear of being labeled unintelligent is often greater than the need to know what one is saying. Hence, the majority of listeners will simply nod in affirmation that whatever you are saying is right to avoid admitting ignorance of the terminology. Thus business jargon fluency creates the illusion of having a brilliant mind and minimizes questions.

Status, efficiency, and the power -- these are the social functions of business jargon. By the way, which of the three expressions for being laid off did you pick? Here is a fourth option.

Well excuse me, but I must resume optimizing the web scraping application, removing the ash and trash from the data, anonymizing the respondents, and then surfacing the visual analytic results set to the stakeholders. You understand what that means, don't you? (SMILE)