A variety of automated passenger counting tools are helping transit systems better analyze how people are using their services, including who gets on board a train or bus and when they get get off.

The average transit passenger probably doesn't care how many other passengers ride the transit system, unless too many are crammed into the vehicle they ride. But an accurate tally of ridership is absolutely crucial information for public transit agencies -- it's definitely the most important gauge of operating performance. Besides, reliable ridership reports are required by the National Transit Database program of the US Department of Transportation (U.S. DOT).

In the early days of urban public transportation (carriages, horsecars, then electric streetcars), each passenger had to have a ticket, and transit companies simply counted tickets sold. But counting riders started to get more complicated with the advent of subway and elevated trains. Turnstiles were introduced to control access (and count passengers), but what if passengers transferred freely from one line to another? How to count passengers for each line? Then there's been the introduction of innovative fare-collection methods, such as multi-ride passes and self-service fare payment, as well as no-fare operation of some services. 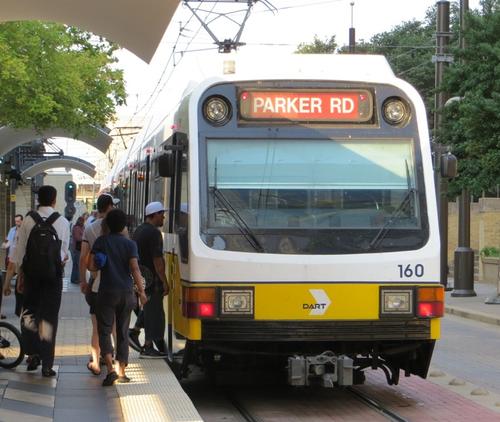 So, about midway in the 20th century, transit agencies initiated manual counting, typically carried out once or twice a year by temporary contract workers who would tally every single passenger boarding a transit vehicle. This method became fairly widespread for several decades, but it was tedious and somewhat expensive (even with lower-wage temp workers). Plus accuracy depended on quality work by counters. These problems worsened with the advent of multi-car light rail transit trains, with riders boarding from surface stops through any door on any car.

Helping to solve these problems, starting in the 1990s analytics (together with other technology) has come to the rescue with Automatic Passenger Counting (APC). As explained by US DOT in a discussion of Transit Core Technologies, APC is "An on-board or in-facility data collection tool that automatically counts passenger boardings and alightings by time and location." To detect and tally passengers, APC systems may deploy treadle mats, or even machine vision technology, but the most common method involves horizontal or vertical infrared beams. The explanation also notes that "APC data can be used for real-time service monitoring or service planning purposes."

As explained by the Transitwiki.org website, "APCs work using infared lights above the doorways to a vehicle. A set of invisible (to the human eye) beams of infared light shine down, spaced so that the order in which the beam is broken by a person determines if they are entering or exiting the vehicle." (The operation of these devices is typically undetectable to passengers.)

APC functionality can be greatly enhanced via integration with GPS, Automatic Vehicle Location (AVL) systems, and Automatic Fare Collection (AFC) systems. (Brief descriptions of these public transit technologies were provided in my 2012 A2 blog article Unknown Document 247066. With integrated GPS data, APC data include highly accurate records of passenger counts, both boarding and deboarding, by transit stop or station.

As the Transwiki.org website further notes, "The APC computer can also integrate with an on-board GPS system to link passenger data to vehicle location. This provides a wealth of data for agencies to analyze about the utilization of the system based on location, direction of travel, and time."

There are a number of APC systems suppliers (both hardware and software). Syncromatics offers a system that is completely "integrated with [its] web-based system and route database". As the company emphasizes, "Automated passenger counting allows you to make informed decisions about where people are riding, and when they are doing it. This is critical information for making service changes, establishing budgets, securing funding, and responding to changing ridership patterns."

Infodev, a Canadian vendor that specializes in directional passenger counting, claims that its system has been "refined and improved…to a point where it provides counting accuracy above 95% and usually reaches 97-98%." Infodev points out that "Using an automated people counting system (also known as an automatic passenger tracking system) is like having extremely reliable manual checkers that work every day and never tire out."

Another system is marketed by Urban Transportation Associates Inc. (UTA). The company claims its system "has been evaluated in over twenty large urban transit systems and has been found to consistently generate Passenger Counting Accuracies in the 97%-99% range."

APC has implemented big data analytics to tremendously improve the ease, speed, accuracy, and cost burden of keeping track of transit ridership in the industry. Not only has the process of ridership counting per se been improved, but -- especially through the integrated deployment of other new analytics-based technologies such as AVL and AFC -- transit agencies now have a wealth of data about transit passengers' riding behavior which enables them to better tailor public transport service and facilities to public needs.