Universities Create Their Own Social Networks For Students - InformationWeek

Facebook goes only so far. Some universities are using enterprise social networks to recruit, engage and retain students.

7 Ways To Create E-Portfolios
(click image for larger view)
To apply to the Milwaukee School of Engineering (MSOE), you have to do it online, and the first step is signing up for MSOE Bridge, the school's own social network.

MSOE is one of a handful of learning institutions that has decided engaging with students through social media requires more than just a Facebook page and a Twitter account. These universities are creating their own social networks centered on the student experience, with many of them at least building toward covering the span from prospective student to accepted student, enrolled student and alumnus.

MSOE started with admissions because that was one of its areas of greatest concern at the start of the project, according to Dana Grennier, director of digital marketing at the school. Of particular concern was the drop off between acceptance and enrollment, when keeping in touch seemed to be a particular challenge, she said in an interview. "Students weren't at home when we were calling, and they weren't responding to emails like they used to."

Grennier was working in the admissions office when the original directive came down to "go be social," on the theory that social media would be a better way of connecting with students. The admissions office set up Facebook pages, "but we really didn't know what to do with them or how to manage them appropriately," she said. After getting authorization to seek consulting help, she pulled in the agency 7Summits, which suggested MSOE create a tighter connection with applicants by fielding its own social network. Facebook would still be used for marketing and streamlined site registration and login, using Facebook Connect for social sign on.

One of the significant payoffs from the MSOE Bridge implementation was that keeping students engaged from the application phase onward produced an 8% improvement in the number of accepted students who actually enrolled at the school. The site launched in November 2011, and the retention rate from acceptance to deposit rose from 30% to 38% with the incoming class of 2012.

"When they get to campus, what we've seen is they feel really connected. That's what we wanted. We wanted them to feel part of MSOE before they ever set foot on campus," Grennier said. The community allows prospective students to connect with each other and communicate privately with their admissions counselors. Some current students also participate by acting as campus ambassadors.

[ For the origin of the transparent hand, read Udacity: Creating A More Engaging MOOC. ]

The social software is integrated with the university enterprise systems for submission of applications and tracking of admission status.

Grennier and James Davidson, one of the consultants from 7Summits, presented at an ACT Enrollment Planners conference in July, citing as additional results:

-- A 30% productivity improvement for admission counselors, who spent less time chasing students and more time interacting with them.

-- A near-doubling of the enrollment in electrical engineering.

These results were achieved on a WordPress website using the BuddyPress plug-in and additional customizations. WordPress is open source software for blogging and Web content management, which can be customized with plug-ins (to change its default behavior) and themes (to change its appearance). This year, MSOE has been developing a new version based on Jive Software's platform for social communities, which will also have a broader mission to serve current students and alumni, as well as incoming students. That's scheduled to launch at the end of the month, about a week before students return for the fall term.

Jive has played a role in a number of other higher education social networks, including the University of Phoenix's Phoenix Connect, which claims a half-million registered members, 40% of whom are active participants every month.

One of our new InformationWeek Social Business columnists, Kristen Corpolongo of Northwestern University, is also working on a Jive implementation for alumni, currently in beta testing, and Northwestern's School of Education has fielded a live community using the cloud edition of Jive's software. Corpolongo says the more ambitious social network she has in the works will run in a dedicated hosting environment so she can customize it more to the university's requirements. 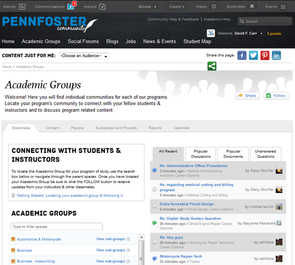 Another example is Penn Foster, which offers a Jive-based social community to students in its online education programs (a mix of college, job training and high school equivalency courses).

Jive doesn't have a complete monopoly in education social networks. Back in January, I met with Simon Vaughan, deputy IT director at the U.K.'s Cardiff University, who spoke at the IBM Connect conference about a side project developing the SocialStudent website in partnership with a consulting firm. SocialStudent is based on IBM Connections, which (like Jive) is a broad-based social collaboration platform that includes tools for managing blogs and wikis in addition to discussion groups and social activity streams. Vaughan said he is leaving his university post to work full time on the site, meant to be a prepackaged academic social network that universities can subscribe to. The site has some pilot users and others in the sales pipeline in the U.K. and is preparing to launch a U.S. version of the site, he said.

I totally agree with you @Deb. Universities these days, especially the ones who offers online programmes have their own social platforms which they use to connect to their peers and students all throughout the course. I think it's good as it helps to connect with students and teachers without any hassles.
Reply  |  Post Message  |  Messages List  |  Start a Board

Hi guys, I'm wondering if anyone else has heard of UCROO (Private Social Network for Universities)? I heard about them at a conference when I was in Australia last year. I hear they are doing some great things with The University of Melbourne.
Reply  |  Post Message  |  Messages List  |  Start a Board

Thanks for giving me a peek into your community. Will I see you at JiveWord? I'll be there to promote my Social Collaboration for Dummies book http://www.wiley.com/buy/97811... coming out in early October
Reply  |  Post Message  |  Messages List  |  Start a Board

Thank you David for this wonderful write up! We are so proud of our community. I love that you were able to connect directly to our amazing students who have really made the community what it is today!
Reply  |  Post Message  |  Messages List  |  Start a Board

Students ought to have a pretty major relationship with the university they're enrolled in, so I think that's a little different than expecting people to join a new community for every brand they have some connection with.

Also, if the institution can achieve single sign on with LMS and other online school resources and make the social environment part of the learning environment, as Penn Foster says it has, that ought to boost adoption and make it much more useful.
Reply  |  Post Message  |  Messages List  |  Start a Board