What Windows 8.1 Must Be - InformationWeek

Windows 8 Desktop Mode is not usable on conventional desktops and notebooks, but the problem is clearly fixable and Microsoft will see the wisdom of this before too long. Close your eyes and imagine that it's well into 2013 and Microsoft is preparing their first update to Windows 8, in which they address widespread complaints about it.

DISCLAIMER: There is no Windows 8.1, at least not announced. This is all my imagination, but consider it informed speculation.

You are feeling dizzy and faint. When you awake, it will be many months into 2013... [cue harp strumming...]

The first leaked images of Windows 8.1 confirm months of analysis and what everybody knows: Windows 8 is a bust in the enterprise on conventional desktop and notebook computers. Even Microsoft knows it, and its first major OS update attempts to address it. Desktop Mode in the new OS is not usable on these old-style computers, which are still the overwhelming majority of computers in enterprises.

InformationWeek's Paul McDougall says Windows 8 looks like a flop and maybe Microsoft should give up on Metro.
Kevin Casey disagrees and argues that customers and Microsoft should be patient.

Based on the latest data [editor: remember, we're in dreamland here], it looks like Windows 8 is selling like hot cakes on tablets and even on consumer desktops, where users don't have much choice. In fact, the relative scarcity of Windows 7 on conventional consumer systems has probably increased sales of touch-based Windows tablets and hybrids. But, as Microsoft no doubt assumed, Windows 7 has proven more popular than ever with enterprises who had lost any thought of waiting for it and have moved ahead full-steam with their Windows XP-to-Windows 7 transitions.

The major change in Windows 8.1 is a "Classic Desktop Mode," which makes the desktop more like Windows 7's. There are ways in Windows 8 of doing whatever you need to do, but they are far from obvious. Users have responded by adopting a mish-mash of utilities to change the behavior of the desktop, such as the free Classic Shell, a project on Sourceforge. But there are many others: 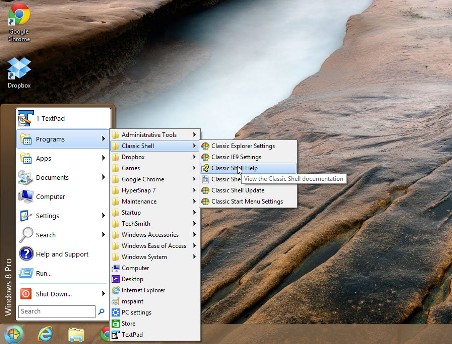 Some of the utilities just add a familiar Start button, but some go so far as to boot you right into Desktop Mode. It's become a mess and enterprises have told Microsoft in no uncertain terms that they need to ratchet back on the radical design changes if they ever want to sell Windows 8 in large, enterprise quantities.

Back at the Windows 8 launch in New York last year, then-Microsoft President Steven Sinofsky said that the company thought all computers should be touch-enabled for the user interface. Perhaps this was the thinking behind making the desktop mode so unappealing, but keyboards and mice don't seem to be going away. Cooler, post-Sinofsky heads seem to be prevailing now.

Last November InformationWeek's Paul McDougall likened Windows 8 to "New Coke", a marketing disaster from which the company eventually had to withdraw. Operating systems are just a little bit more complicated than sugar water, and they can be fixed more easily.