KnowBe4, Inc. is the world's most popular integrated platform for Security Awareness Training and simulated phishing attacks. We help you manage the ongoing problem of social engineering.

KnowBe4 was founded on the principle that the human side of the cyber security industry is severely neglected. We have thousands of customers using our new-school security awareness training program to keep their networks safe.

We are in the business of training employees to make smarter security decisions.

Find out how affordable this is for your organization, you will be pleasantly surprised. Get a quote here: https://info.knowbe4.com/kmsat_get_a_quote_now

Webcast: Incredible Email Hacks You'd Never Expect and How You Can Stop Them

If you think the only way your network and devices can be compromised via email is phishing, think again!

A majority of data breaches are caused by attacks on the human layer, but email hacking is much more than phishing and launching malware. From code execution and clickjacking to password theft and rogue forms, cybercriminals have more than enough email-based tricks that can mean serious trouble for your InfoSec team.

In this webinar Roger A. Grimes, KnowBe4's Data-Driven Defense Evangelist and security expert with over 30-years of experience, explores the many ways hackers use social engineering and phishing to trick your users into revealing sensitive data or enabling malicious code to run.

Roger will show you how hackers compromise your network. Youâll also see incredible demos including a (pre-filmed) hacking demo by Kevin Mitnick, the Worldâs Most Famous Hacker and KnowBe4's Chief Hacking Officer. Email is still a top attack vector cybercriminals use. Donât leave your network vulnerable to these attacks.

Every security leader faces the same conundrum: even as they increase their investment in sophisticated security orchestration, cybercrime continues to rise. Often security seems to be a race between effective technology and clever attack methodologies. Yet there's an overlooked layer that can radically reduce an organization's vulnerability: security awareness training and frequent simulated social engineering testing.

This report includes baseline phish-prone percentages by industry and strategies for dramatically decreasing those percentages. 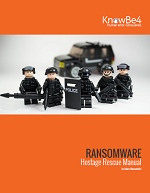 Get the most complete Ransomware Manual packed with actionable info that you need to have to prevent infections, and what to do when you are hit with ransomware. You will also receive a Ransomware Attack Response Checklist and Ransomware Prevention Checklist. 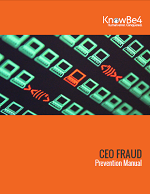 CEO fraud is responsible for over $3 billion in losses. Don't be next. The CEO Fraud Prevention Manual provides a thorough overview of how executives are compromised, how to prevent such an attack and what to do if you become a victim. 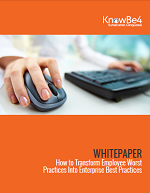 Whitepaper: How to Transform Employee Worst Practices Into IT Security Best Practices

The bad guys are just one gullible user click away from staging an all-out invasion on your network. Get clear direction on how to go about improving your organization's security posture against social engineering attacks. 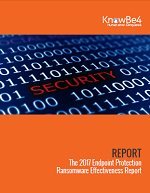 It's estimated that in 2016, the cost of ransomware was over $1 Billion, making it the most lucrative criminal business model in the history of malware. In this report we examined survey data of who is at risk, what the scope and cost of an attack is, how organizations are protecting themselves from ransomware, and the effectiveness of their endpoint protection. Find out what is really the best way to combat the threat of ransomware. The results might surprise you! 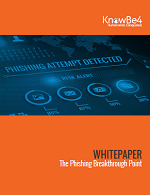 Utilizing security awareness computer based training and simulated phishing security tests can be effective tools to reduce unintentional insider threats. However, if robust metrics are not put in place, phishing tests can create organizational social engineering blind spots. Find out more about the breakthrough point in an organization's phishing awareness level.

How to Transform Employee Worst Practices Into IT Security Best Practices