Why the Elephants in the Room Quash Analytics - InformationWeek

50%
Tweet
A PwC survey highlights the confusion and resistance that surround analytics initiatives in the executive offices.

Some of the least analytically-astute people work in the C-suite or in management. Despite the efforts of analysts and data scientists to shed light on important issues that could make a material difference, fiction is sometimes favored over fact.

Even when there is interest in finding the truth with the help of data, what it will take is often underestimated. For example, in a recent PricewaterhouseCoopers (PwC) study, 2,100 executives were asked to rate their companies as "highly data-driven," "somewhat data-driven" and "rarely data-driven." Interestingly, the rarely data-driven group expects to achieve the most with data by 2020, according to Dan DiFilippo, PwC's US and Global lead for Data and Analytics. 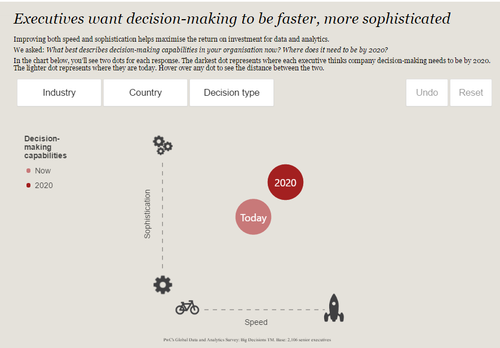 The data can't be trustedNever mind what the data says. My gut says…

You've probably experienced that kind of thinking first-hand, because it's still a problem. In the PwC survey, 61% of respondents said they could rely on analytics more and instinct less.

"You still have skeptics, you still have doubters," said DiFilippo. "You still have people who say that machine or that algorithm is not going to tell me [anything]. I've been doing this for 30 years. I know what the answer is here."

It's true that old habits die hard. On the other hand, business leaders increasingly are expected to be some level of data-savvy. How data-savvy is matter of opinion and debate.

The data is wrong Michael Walker, founder and president of the Data Science Associationtold me late last year that one of the biggest challenges data scientists face is executives with agendas. The data says X, and the executive wants it to say Y. Make the data say Y, or else.

Ever had that happen? Depending on the corporate culture, and the carrots or sticks involved, there's intentional misinformation circulating out there and the issue is bias.

There's a double standard Today's businesses want to become more data-driven but their executives and managers don't always lead by example. Having a double standard causes cultural friction, and cultural friction slows progress. Oh, and when it comes to training, guess who's missing? Training is for his people. He doesn't realize it's the little things that make the difference between antiquated management styles and sound leadership.
Analytics are flawedOne of the best pieces of advice I hear about succeeding with analytics over the long-term is, "don't try to boil the ocean." It's far wiser to start small, learn from mistakes, refine the idea (or abandon it and start with a new one), and then success is achieved, consider how the effort might be expanded to different areas.

In today's rapidly moving economy, big, expensive undertakings that take years to complete are likely to fail, especially if they're not phased, because by the time they're rolled out, they're outdated, they misalign with the company's new direction, people working on the project have come and gone, or a combination of those things has happened.

Sadly, big failures can convince executives that analytics don't work, which tends to be a gross oversimplification of the problem. In many cases, the "failure" is merely a symptom of a much larger problem or set of problems that may have to do with culture, technology, or both.

We welcome your comments on this topic on our social media channels, or [contact us directly] with questions about the site.
Comment  |
Email This  |
Print  |
RSS
More Insights
Webcasts
The Threat From the Internet - and What Your Organization Can Do About It
How Secure is Your Azure Cloud Security Environment?
More Webcasts
White Papers
Securing IT & OT in Industrial Environments
Ransomware Response Report: Trends & Outlook
More White Papers
Reports
CyberSecurity Trends 2020
Annual Threat Intelligence Report: Perspectives and Predictions
More Reports