In a nod to Facebook’s dominance, MySpace tries to regain popularity by shifting focus from user's profiles to news. 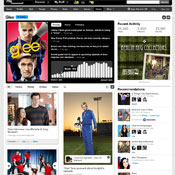 MySpace Topic Page
MySpace, which has seen its popularity fall as Facebook's has risen, launched a revamped site Wednesday that shifts focus from people's profiles and friends to the latest trends in entertainment.

The redesigned MySpace, which includes a new logo, shifts social networking on the site from people discussing the latest happenings in their lives, most of which would only be of interest to friends and families, to a "new visual identity and product features that put content center stage."

In essence, MySpace owner News Corp. has decided to abandon competing head-to-head with Facebook and take the site in a new direction in an attempt to rejuvenate the brand. Once the hottest social network on the Web, MySpace has been eclipsed by Facebook, which has a half billion registered users, compared with MySpace's 122 million.

The new MySpace is available in beta and will be rolled out to users through the end of November. New users will be entered into the beta version. MySpace plans to launch this year a mobile application for accessing the new site through an Apple iPhone or smartphone running Google's Android operating system.

The major changes to the site start with the welcome page, which users will see when they log in. Rather than start with a person's profile, the page will contain entertainment-related content covering music, movies, television and celebrities. The content displayed will reflect the interest expressed by the user.

In addition, MySpace will have "content hubs," where users can see news, videos and photos related to specific topics. In general, the hubs, which will be rolled out over the coming months, will focus on games, comedy, sports and fashion.