50%
Tweet
The TL-WR702N is a "nano" wireless router for travel or SOHO use. It's not much bigger than a matchbook, yet performs great for less than $25. It's a must-have for anyone who needs to set up a Wi-Fi network quickly.

TP-Link's TL-WR702N "nano" router is aptly named. It's not much bigger than a matchbox, yet works great as a mobile router, bridge, access point, repeater, or client. It's a great way to share or re-use connectivity on the go.

The TL-WR702N retails for a mere $24 MSRP, a better deal than the D-Link SharePort, which provides similar functionality for more than twice the price. Part of the price discrepancy is due to features; the TL-WR702N doesn't include anything like the SharePort's file-sharing functions. But that's no great loss--those features aren't implemented well on the SharePort anyway. 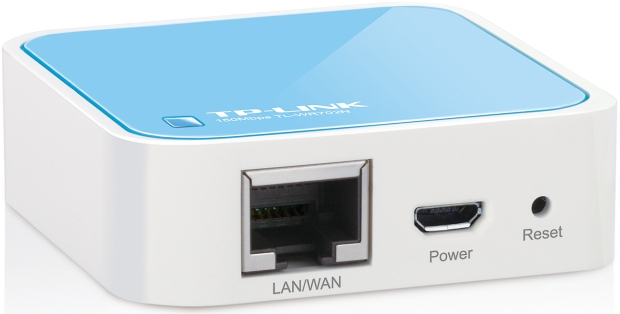 The TL-WR702N is competitive with full-blown routers that cost five times as much. It offers 2.4-GHz IEEE 802.11b/g/n wireless connectivity, WPA and WPA2 encryption, port forwarding via UPnP and port-triggering rules, firewall controls, and even support for services such as DynDNS and NO-IP. Obviously, because the TL-WR702N has only one port, you can't use it as a replacement for a multi-port home router. The TL-WR702N measures just 2.2 inches by 2.2 inches by 0.7 inches (57 x 57 x 18 mm), not including power.

By default, the TL-WR702N comes set up as an access point. Simply plug it into a wired network via the included Ethernet connector and cable; connect the power supply; and log in via the SSID and password printed on the bottom of the unit. I had no trouble using streaming media or other resource-intensive applications through the TL-WR702N, which tops out at a wireless speed of 150 Mbps. It worked well even with fairly intensive media streaming applications such as NetFlix.

Configuring the TL-WR702N for another of its modes requires that you log directly into the router, either by using the included software CD or by configuring your client machine--desktop, notebook, or phone--to use a static address. Once you're in, though, the configuration is easy enough. A wizard lets you pick a mode for the TL-WR702N, and you can tweak all settings manually if need be. Hackers will be pleased to know the router's firmware can be replaced with third-party products such as DD-WRT, although naturally such tinkering would void the warranty. 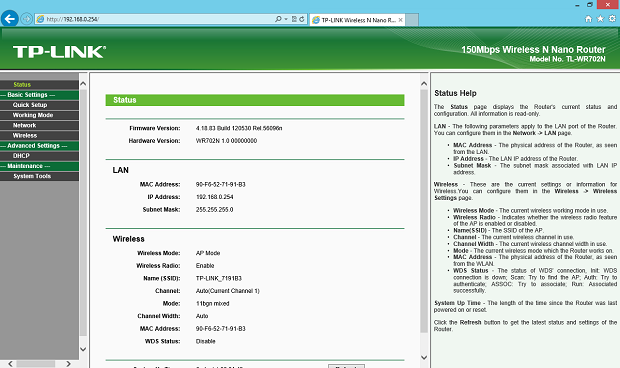 Another point of comparison with the SharePort is the power supply. That device is a wall wart--it plugs directly into an outlet because it is the power supply. With the TL-WR702N, you connect the USB cable from the micro-USB port on the device to either a PC or to the included wall adapter. Bottom line: I liked the SharePort for being straightforward, but there's a bit more flexibility with the TL-WR702N.

I also admired the SharePort's external hardware switch, which lets you select a behavior (access point, repeater, etc.) without the use of a Web browser. The SharePort's documentation is also better compared to the TL-WR702N's, a single sheet of paper. But bottom line? The TL-WR702N gives you all the most crucial functionality in a small package at a far lower price.

This tiny wireless router for travel or SOHO use offers good features and dependable performance for a great price.