You Vs. Offshoring - InformationWeek

U.S. tech pros are surprisingly upbeat, and pay is on the rise. But the job outlook is anything but warm and fuzzy.

Andrix has more than two decades of IT experience, and he still takes about two weeks of IT classes every year. Most recently, he completed an overview course on the latest version of Microsoft SQL server. He also has taken classes on statistical analysis to get tips on how to make the company's databases run faster. He attends Web seminars as well as in-person classes.

Despite the pressure Andrix recognizes, just 42% of IT staffers and 43% of managers receive education and training as part of their benefits packages, our survey finds. Even fewer get tuition reimbursement: 30% of staffers and 28% of managers. Many IT pros have to come up with the money and time to keep their skills up to date. Andrix says it's a struggle finding time to study while devoting a lot of hours to a job, but he believes there's no alternative. "The pace of change is intense," he says.

A lingering pessimism isn't surprising. When the tech-telecom bubble burst, IT employment slumped, going from 3.4 million to as low as 3.2 million, according to the U.S. Bureau of Labor Statistics. And that disguises the level of turmoil in the IT job market--for example, there are 220,000 fewer people who call themselves programmers today than in 2000, analysis of the bureau's stats shows. So the IT people still working today have had to adapt to a much different market.

Kelan Birnbaum is one of the IT pros who has been through the tough times and thinks he's got the right mix of skills and the right job to fend off outsourcing--but he's got a backup plan just in case. Birnbaum has been in IT for 17 years. In 1998, he launched a consulting firm, then took a job with one of his clients, Blue Cross Blue Shield of Minnesota, where he's now a full-time Java programmer, developing front-end systems that make SAP applications easier to access. One current project is for account collection teams.

Birnbaum says his job isn't very susceptible to outsourcing or offshoring because of the close work he does with users. "If you can find a niche like SAP with specialized business skills, that's harder to outsource," he says. Yet he warns against getting too far from the technology, too much in business or project management, because those jobs are dropped quickly when projects slow down. And he's kept his consulting business on the side, just in case.

Job Security In Security
Information security pros are among those most resistant to offshoring or outsourcing. While companies are willing to outsource some security functions, such as intrusion-detection monitoring, most work related to information security is staying in-house. "Companies are crazy scared about outsourcing security," researcher Foote says. Put another way, security gaffes are the kind of thing for which IT execs get fired.

Dean Sapp, an IT security specialist at a large law firm in the Southeast, got his first taste of security work doing software development and quality testing for Novell as it added encryption to products. He kept learning about IT security, mostly on his own, after joining the law firm several years ago as a network engineer. Two years ago, the firm's CTO decided to create a dedicated security specialist job, and Sapp stepped forward. He's studying for his Certified Information Systems Security Professional certification. "If you want to keep your skills fresh and like a challenge, then you need to be proactive," he says.

Brad Lape seems like the kind of IT worker who should be worried about outsourcing. He started in tech support and help desk jobs 10 years ago, straight out of high school, having gotten the tech bug while tweaking PCs to maximize game performance. He spends his days driving to Time Warner Cable offices to fix the company's PCs and support cable modems. Our survey finds help desk pay has stagnated in the last three years, with median total compensation at $49,000. Lape believes companies will always need people to fix PCs, but he realizes he must expand his skills--though he's not keen to take up Time Warner's offer of college course reimbursement. "In 10 years, I foresee myself doing network administration work, but I'm a creature of comfort," he admits. 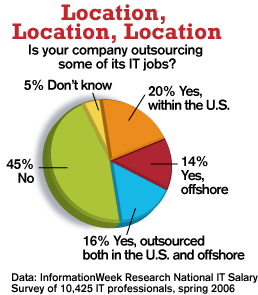 Talk to IT executives, and you'll hear about the market for talent getting tighter. E.&J. Gallo Winery is struggling to find integration, business intelligence, and security skills in its central California region. "When we post openings for these jobs, we don't get a lot of resumés, so the search criteria is changing a lot, and we're providing more training," CIO Kent Kushar says.

Gallo sends some programming offshore, such as a current business intelligence project. But there's little turnover among Gallo's IT department of 200 people, and the staff received raises in recent years when other IT shops were holding back on pay hikes.

As for Kushar, who's been in IT for 42 years and the CIO at Gallo for the last 10, he's sure there's a promising future for U.S. IT professionals, despite outsourcing and offshoring. Kushar sees cost savings in offshoring eventually being squeezed as countries such as India struggle to keep their workforces skilled in the latest technologies, making U.S. workers who understand technology and the business even more valuable.

That's not going to comfort a lot of IT workers, even if recent data suggests offshoring hasn't reduced total IT employment or clobbered salaries. It's not yet clear whether the current tight labor supply, marked by 2.5% unemployment, will lead to higher salaries, or whether the offshore alternative will keep a lid on wages. And it's certain that offshore competition will continue moving into new areas of IT work, forcing IT pros to manage their careers to avoid getting caught in the path of lower-cost labor. "The problem is that you never know when it will hit you," says researcher Foote, who adds that he knows people who've left IT careers rather than try to move into more offshore-resistant IT jobs. "Some people say they just can't have a bogeyman on their shoulder."

As it turns out, if the offshoring, the constantly changing skills, and the pressure of IT work don't get you, the uncertainty of it all just might.

Back Issues | Must Reads
White Papers
Why Add Security to Your Skill Set and How to Do It
MontanaPBS Shifts to Agile Broadcasting with Help from Raritan KVM Solutions
Key Strategies for Managing New Risks in Cybersecurity
Are We Cyber-Resilient? The Key Question Every Organization Must Answer
The Hidden Security Risks of APIs: How to Protect Your Brand, Business, and Data