You're Doing Analytics, But Do You Have an Analytical Mind? - InformationWeek

50%
Tweet
The fact that someone is working with analytics doesn't necessarily mean they have an analytical mind. Do you have such a mind?

As an All Analytics community member, you likely know more about analytics than most people in your organization. You may have years of experience, special training, or both. But have you ever considered how you really think about analytics?

I ask the question because some people passively consume dashboards and reports, accepting what they say at face value. Truly analytical minds question a lot of things and they even think differently about how they use and consume information. Do you have an analytical mind? Consider the following.

Some data scientists I know encourage people to question everything because they question everything. Where did the data come from? How was it handled? Is the quality good enough? What data, models, and algorithms are being used? What isn't being used and why? Obviously, their questions get nerdier, because if they're actual data scientists, they know how to program, they probably have a Ph.D. in math, and they understand statistics. Conversely, some mere mortals may have heard of Bayesian statistics, but they'd probably have a heck of a time explaining it coherently. And R or Python programming? Fuggedaboutit. However, there is a trait that data scientists have that everyone else in the organization can and should adopt: curiosity. If you're genuinely curious about data, analysis, and everything that happens in between and after, you'll be a more effective analyst, regardless of what your actual title may be.

Patrick Hall, senior machine learning scientist at SAS and others explain that the scientific method follows a process. The steps are: formulate a hypothesis, gather data, test the hypothesis, do an analysis, and communicate the results.

Obviously, we're all familiar with the analysis and communication aspects; however, there is considerable value in understanding the entire process. Here's why.

The average person tends to start with an assumption instead of a hypothesis because that's just the way non-scientists have been programmed. (Alternatively, they may be on a covert mission to "prove" something.) They perceive an outcome and then align the data, the analysis, and everything in between -– whatever is necessary to achieve that outcome. Data scientists call this, "torturing data." The downside of assumptions is that they are assumed to be true. When we start with an assumption, we tend to cherry-pick data, models, algorithms, data visualizations, and even the information we share with others. A lot of bias is involved.

A hypothesis, on the other hand, is proved or disproved. Testing happens. Verification happens. Multiple models are generally used instead of one. Importantly, time is spent understanding the "whys" in addition to the "whats." In short, the scientific method involves critical thinking that non-scientific approaches tend to lack. Bias slips in here too, but when using the scientific method, people want to do all they can to eliminate bias because they genuinely care about the accuracy of results. (And, unlike most people, they're comfortable with and expect margins of error in their work versus being comfortable with round numbers.) 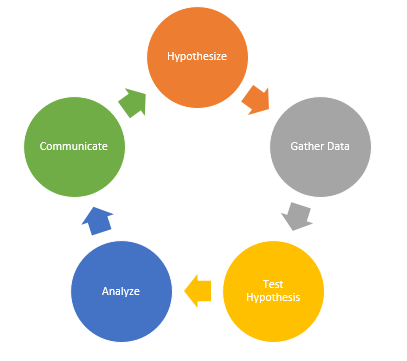 If you're approaching analytics passively, you're missing a lot of information and learning opportunities that can make you a better analyst. If you think more critically about data and how it's being used, you may see flaws in your process, analytical results, and business outcomes that weren't apparent previously -– proverbial "aha" moments.

We welcome your comments on this topic on our social media channels, or [contact us directly] with questions about the site.
Comment  |
Email This  |
Print  |
RSS
More Insights
Webcasts
Malicious Insiders: Real Defense for Real Business
5 Steps to Integrate SAST into the DevSecOps Pipeline
More Webcasts
White Papers
Are you leveraging all the benefits of cloud computing?
SANS 2020 Cyber Threat Intelligence Survey Results
More White Papers
Reports
Endpoint Security 2020: The Resurgence of EPP and the Manifest Destiny of EDR
2019 Threat Hunting Report
More Reports