YouTube is close to acquiring video game streaming service Twitch, a deal that will give Google's video platform access to a desirable audience of highly engaged, hard-to-reach gamers.

According to Variety, the deal is done, with Twitch going for more than $1 billion. The Wall Street Journal reports that negotiations are in preliminary stages and that a deal isn't imminent. The Verge confirms Variety's account, stating that an agreement has been reached and that details are being finalized.

Google declined to comment on what it characterized as rumors and speculation.

[The future of mobile is linking into apps. Read Mobile's Next Step: Deep Linking Between Apps.]

Launched three years ago by Justin.tv co-founders Justin Kan and Emmett Shear, Twitch is a video streaming platform that shows video games as if they were live sports broadcasts. The service allows viewers to watch other people playing and commenting on video games such as League of Legends, Counter-Strike: Global Offensive, and World of Warcraft.

To those who don't play video games, the idea of watching other people play video games for entertainment might hold the same appeal as security camera footage or the home movies of strangers. But Twitch has proven to be phenomenally popular. It now attracts over 45 million unique viewers per month worldwide. More significantly, the average Twitch viewer watches 95 minutes of video every day and is likely to be in the 18-to-34 age demographic coveted by advertisers. 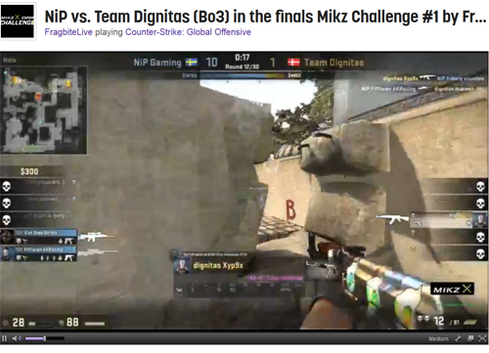 As a comparison, YouTube says it gets over 1 billion unique visitors every month and that those visitors consume over 6 billion hours of video. That amounts to an average of 6 hours of video per user monthly, or 12 minutes per user every day -- far less than Twitch viewers.

Google has dipped its toe in game-oriented content, with its 2012 investment in Machinima, and the introduction of a YouTube live streaming API for game developers last year. But assimilating Twitch represents a major commitment to an emerging form of content.

The appeal of streaming game video goes beyond engagement and demographics. Google wants a piece of the action because streamed game sessions, unlike movies or TV shows, are cheap to produce.

First, copyright issues are bound to emerge with the music used in Twitch gaming sessions. If Twitch broadcasters have failed to secure music rights -- and chances are most of them playing popular songs in the background have failed to do so -- then their videos could run afoul of YouTube's automated copyright enforcement system, Content ID.

Second, gaming companies have recognized the value of session streaming and might seek a greater portion of revenue from online broadcasts that rely on their intellectual property. Microsoft and Sony last year struck deals with Twitch to allow gamers using their respective consoles to broadcast their play. Looking ahead, game makers and publishers are likely to exert more control over how gaming sessions get published and distributed.

However, Google, owing to its size and existing relationships with large media companies, might be in a better position to handle such negotiations than a startup like Twitch. It also should be able to offer a broader range of monetization and viewing options through YouTube's infrastructure.