Physicians: iPad Not Ready For Clinical Use 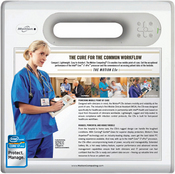 9 Tablets For Doctors
(click image for larger view and for slideshow)
Eighty percent of physicians in a recent survey said they believe that the Apple iPad has an "exciting future in healthcare"--but they doubt it is ready for clinical use.

The survey of 100 "early adopter" physicians by Spyglass Consulting Group in Menlo Park, Calif., also found that 83% of the respondents used desktop computers to access clinical information, whether they were in the hospital, in the office, or at home. Some physicians said they used mobile devices to retrieve healthcare data when they were traveling.

Pretty much the same could have been said of physicians five years ago, when many of them used reference tools and calculators on personal digital assistants (PDAs) and smartphones, but few doctors looked up clinical information on those devices. Some physicians used tablet computers with their EHRs, and some used tablets or PDAs for e-prescribing, charge capture, or both.

[ Docs' love for smartphones and tablets give IT managers a headache. See How Secure Are Your Clinicians' Mobile Devices? ]

One barrier to clinical use of iPads today is the attitude of hospitals. "Seventy-five percent of physicians interviewed reported that hospital IT [staff] was resistant to supporting personal mobile devices on the corporate network," the Spyglass release said. "Hospital IT believes personal devices are insecure, less reliable, and more expensive to deploy, support and maintain than desktop computers."

That finding jibes with other recent studies. But as the Spyglass report acknowledges, hospital security concerns are not the major obstacle to iPad use in clinical work.

"Significant software innovation will be required to realize the vision for anytime, anywhere clinical computing," Gregg Malkary, managing director of Spyglass, said in the announcement. "Clinical applications must be rewritten and optimized to take advantage of the native capabilities of the Apple iPad and other mobile devices including gesture-based computing, natural language speech recognition, unified communications, and video conferencing."

Malkary told InformationWeek Healthcare that, although Epic and Allscripts are both experimenting with iPad-native EHRs, he doesn't expect the vendors to go into production on these innovations anytime soon. The big barrier, in his view, is not the technology, but the vendors' reluctance to "redesign their applications from the ground up with a focus on patient-centric care."

However, Allscripts' Sunrise Mobile MD II product can be used on an iPhone or an iPad. Incorporating speech recognition software from M*Modal and Nuance, Sunrise Mobile MD II allows physicians rounding in the hospital to view clinical data in EHRs, capture charges, send secure messages, and, on the iPad, document notes.

Despite this spurt of activity, however, iPads still have a key drawback: their on-screen keyboards are unsuited for data entry, and voice-recognition software is still far from being able to sort medical terms into discrete fields in an EHR. That would require a breakthrough in the field of natural-language processing.

Some progress has been made on that front by vendors of computer-assisted coding programs, which help coders parse free text for terms referring to diagnoses and procedures. And Nuance Communications, which makes the popular Dragon Naturally Speaking voice-recognition program, is working with the University of Pittsburgh Medical Center to harness IBM Watson in natural language processing.

Malkary is encouraged by the fact that so many physicians have embraced mobile computing. Ninety-eight percent of the doctors his firm interviewed use mobile devices, and 70% own iPads, he said. "If this many docs bought the iPad, it's a testament that we're getting closer, from a form factor perspective, to something that integrates with their workflow. Now they've got to fill it out with applications."

When are emerging technologies ready for clinical use? In the new issue of InformationWeek Healthcare, find out how three promising innovations--personalized medicine, clinical analytics, and natural language processing--show the trade-offs. Download the issue now. (Free registration required.)