Evernote also has a set of APIs, which about 20,000 developers tap to extend its capabilities and integration. Evernote's Trunk service provides access to many of those applications, which include news feeds, Skitch files (Evernote acquired this screen capture and augmentation tool), expense filing apps, a food and recipe app (called Evernote Food) and much more.

Today's personal Evernote also has a premium version, which costs $5 per month or $45 per year. One key feature of the premium version is that it lets Evernote users share information with one another. For instance, I use Evernote to plan various content projects for our websites and video shows, and I share those project notebooks with other users so that we have the same information. In fact, we collaborate on that data -- like any shared Web-based document, it allows for co-authorship, but not in real time, as with Google Docs.

The premium version of Evernote also gets you 1 GB of content upload each month (vs 60 MB for the free version), and allows note sizes of up to 100 MB (vs 25 MB in the free version). It includes offline notebook access, indexed and searchable PDF files.

But here's an extremely important point, especially in this age of BYOD: If you've already got a personal account, that information stays personal even if your company starts using Evernote Business. That is, there's no opportunity for an organization running Evernote Business to get at your personal, unshared documents. As a user, you can still choose to share that information, but you can also create a Business Notebook. This is simply a designation that the notebook is related to work. You still must explicitly share them with co-workers (one by one), and then those co-workers can view and edit and search those Notebooks. Publishing the Business Notebook in the Business Library makes it available to the entire company. 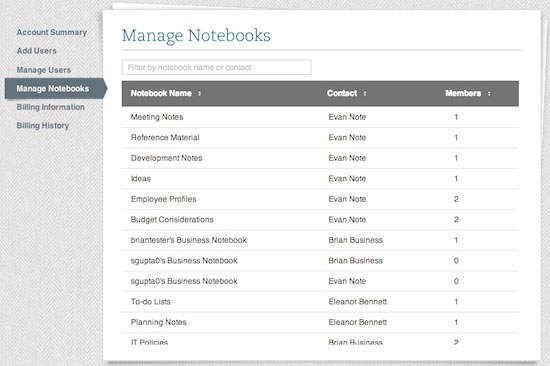 "We have a strong point of view on how the product is supposed to be used," Libin said. Evernote Business is for fast-growing companies, he added. "If they say you can't make personal notes on company time, then they shouldn't be using it," he said.

Back to the Related Notes feature, Evernote isn't just matching tags and keywords, Libin said. The Evernote data team has been working on machine learning for years. The system uses semantic analysis to understand what's in the notes. He gave an example where he was typing in "ABQ," which happens to be the Albuquerque airport code, which created an association with the TV show Breaking Bad, which is filmed and set in that city. This wasn't a literal text string match, he said, but a true association the system made.

This capability even works outside of Evernote. For those who use Evernote Clipper in a Web browser (available for now only in the Chrome browser), upon performing a Google search, the user is presented with a list of relevant Evernote entries on the right-hand side of the Google Results page, including those from team members. See the view below: 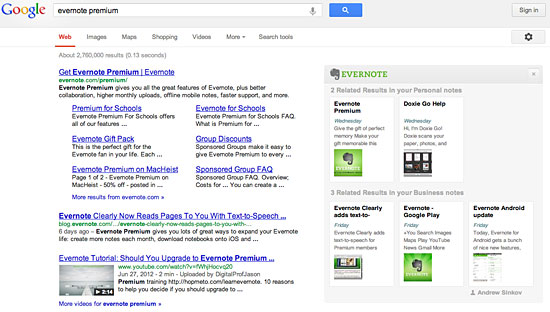 Down the road, Libin would like to extend Evernote's reach into other sources of enterprise information. SharePoint, for example, seems like a good target. Evernote will likely expect third-party developers to create some of those meaningful integrations, but given how entrenched SharePoint is, it might be wise for Evernote to do some of the early work here. After all, this is a case of Evernote crashing the enterprise party, even if it's bringing the coolest party favors.

Libin's prediction: "We're seeing the last couple of years of ugly business software." The technology people have gotten used to in their personal lives has set high expectations, he said, but when "they show up to work, everything's kind of crappy."

That, he said, is where the money is.