SEARCH
A minimum of 3 characters are required to be typed in the search bar in order to perform a search.
Announcements
Alert
Got some free time? Grow your knowledge from the comfort of your computer for FREE!
Alert
Are you looking to stay on top of IT trends? Check out our FREE webinars and virtual events!
Alert
Planning for 2023? Be sure to check out our upcoming in-person events!
Report
How does your salary stack up? 2022 IT Salary Survey Results Revealed
PreviousNext
Government
4 MIN READ
News

The company has opened its own Web store to sell phones with and without service plans from its Android mobile operator partners.
Thomas Claburn
Editor at Large, Enterprise Mobility
January 05, 2010 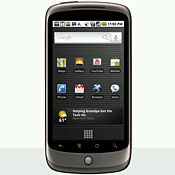 At an event described by members of Google's public relations team both as "seminal" and "anticlimactic," Google on Tuesday introduced its Nexus One mobile phone.

The debut of a Google-branded phone is anticlimactic because so many details about the device have been made public, a sharp contrast with the fanatical message management exercised by Apple, Google's strongest competitor in the mobile space.

At the same time, the Nexus One affirms that mobile computing is where the tech industry is headed and where Google will focus its competitive energy. The war with Microsoft is going well enough that Google can open a second front.

Apple's reported plan to buy mobile ad firm Quattro Wireless, after Google snapped AdMob away from it, underscores just how important mobile devices, not to mention advertising revenue, have become.

It's 11.5 mm thick -- or 11.5 mm thin, as Google senior product manager Eric Tseng put it -- and weighs 130 grams, about as much as a Swiss army knife. It includes a 5 MP camera with an LED flash, stereo bluetooth support, a 3.5 mm headphone jack and two microphones -- one on the bottom and one on the back -- for active noise cancellation.

"The Nexus One belongs in an emerging category of devices which we call 'super phones,'" said Google VP of product management Mario Queiroz.

Software represents the other half of the equation and what Google can do with software is magnified by the power of its cloud infrastructure.

For example, all of the text fields in the phone's apps have been speech enabled, allowing users to speak e-mail messages, then see Google's cloud-based servers handle the speech-to-text transcription. Those who dislike virtual keyboards may find spoken input more appealing. Privacy advocates will no doubt now worry that Google is logging every speech-to-text interaction.

Making the software even more compelling is the speed of the Nexus One's processor. It allows impressive 3D graphics, as can be seen in the phone's new Live Wallpaper app.

"I think that you will see that it pushes the limits of what's possible on a mobile phone today," said Peter Chou, CEO of HTC, the phone's manufacturer.

Perhaps even more significant than the phone itself is Google's decision to become a phone retailer.

Google on Tuesday launched its own Web store to sell Android phones from its manufacturing partners, both without and without service plans. The Nexus One -- which Google says is the first of a series of phones developed in conjunction with its partners for sale through Google -- is available for $179 through T-Mobile USA with a two-year contract and for $529 unlocked.

In the spring, Android phones from Verizon in the U.S. and Vodafone in Europe will be available through Google's Web store, and Google expects additional partners to join in the future.

Following up on concerns raised in an interview with InformationWeek on Monday, Gartner VP Ken Dulaney asked whether Google is handling the inventory and distribution of the Nexus One, a move he believes will be poorly received by some members of the Open Handset Alliance, Google's Android platform partners.

Queriroz declined to discuss the supply chain specifics, but said, "Google is the merchant of record. You're purchasing the phone from Google."

Google's event also served to highlight the growth of the Android platform and the Open Handset Alliance (OHA) that support it.

During Google's Q3 earnings conference last October, CEO Eric Schmidt predicted significant growth for Google's Android platform, which at the time was available on 12 devices in 26 countries. "Android's adoption is literally about to explode," he said.

The OHA launched two years ago and there are now 52 members, with 13 new members announced at the press conference, including China Telecom, NEC, and Freescale.

There was one Android device in one country through one carrier a year ago. Today, there are 20 Android devices through 59 carriers in 48 countries, supporting 19 languages.

Research published on Monday appears to support that view. According to ChangeWave, a December survey of over 4,000 consumers, 21% of those planning a smart phone purchase in the next 90 days said they'd prefer to have the Android OS on their new phone, an increase of 15 percentage points from September.