SEARCH
A minimum of 3 characters are required to be typed in the search bar in order to perform a search.
Announcements
Alert
Got some free time? Grow your knowledge from the comfort of your computer for FREE!
Alert
Are you looking to stay on top of IT trends? Check out our FREE webinars and virtual events!
Alert
Planning for 2023? Be sure to check out our upcoming in-person events!
Report
How does your salary stack up? 2022 IT Salary Survey Results Revealed
PreviousNext
Government
2 MIN READ
News 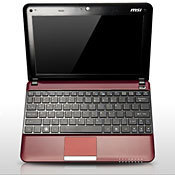 The Wind U135 also features a 250-GB hard drive, 1 GB of DDR2 memory, and Windows 7 Starter edition. The mini-laptop is available in blue, silver, red, and black.

Intel's 1.66-GHz N450 Atom, released in December 2009, is the first in the product line to incorporate the memory controller and graphics circuitry on the same piece of silicon, thereby reducing power consumption by 20% in netbooks, according to Intel. The netbook platform includes the NM10 Express chipset.

Besides reducing power usage, the Intel platform also makes it possible for computer makers to build thinner netbooks. Intel claims the netbook platform is 60% smaller than the previous generation. The U135 is three-quarters of an inch thick at its thinnest point and weighs three pounds.

The system includes a six-cell battery which delivers up to 7.5 hours of battery life, according to MSI. The netbook has a chiclet-style keyboard, which means the keys are elevated to make them more comfortable to use and more accurate.

The mini-laptop's 10-inch WSVGA display has a resolution of 1024 x 600 pixels. The system also comes with embedded Wi-Fi, three USB ports, and a built-in Web cam. The system has a manufacturer suggested retail price of $330, but some retailers were selling the U135 Wednesday for under $320.

Netbooks are meant to be inexpensive, ultra-portable laptops used primarily for basic computer tasks, such as Web browsing and e-mail. The concept of "good enough" computing incorporated in netbooks proved popular with consumers last year, when the systems were the fastest growing segment in the PC market.

MSI is not the first out with a netbook based on the latest Intel platform. Other computer makers with similar products include Toshiba, Fujitsu, Acer, Asus, Lenovo, Dell, and others.