SEARCH
A minimum of 3 characters are required to be typed in the search bar in order to perform a search.
Announcements
Alert
Got some free time? Grow your knowledge from the comfort of your computer for FREE!
Alert
Are you looking to stay on top of IT trends? Check out our FREE webinars and virtual events!
Alert
Planning for 2023? Be sure to check out our upcoming in-person events!
Report
How does your salary stack up? 2022 IT Salary Survey Results Revealed
PreviousNext
Government
1 MIN READ
News 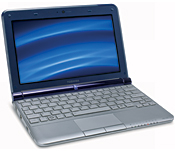 The Mini NB305 runs on the Atom N450, which together with the low-power NM10 Express Chipset is a much smallernetbook platform than the previous generation. A major advancement in the latest platform is the integration of a graphics and memory controller on the same piece of silicon as the CPU.

As is typical for netbooks, the NB305 comes in multiple colors, including brown, white and blue, to appeal to people looking for a more stylish portable. The mini-laptop has a 10-inch widescreen with LED backlight for a crisper image. In addition, there's a full-size keyboard, a touchpad and three USB ports.

Due to the power efficiency of the new Atom platform, the NB305 gets up to 11 hours of battery life, Toshiba said. The system also includes up to 2 GB of DDR2 system memory, up to a 250 GB hard drive and built Wi-Fi. Bluetooth is available as an option.

Other features include a memory card reader slot and built-in Webcam, speaker and microphone. The system weighs 2.6 pounds.

Netbooks typically have displays ranging from seven to 10 inches and cost between $300 and $500. The mini-laptops, which often have less than full-size keyboards, were the hottest selling PC category less year. The devices are primarily used by younger students or people looking for an inexpensive second computer for basic computer tasks, such as Web browsing and e-mail. Netbooks mostly run Windows XP or Windows 7.


10 Questions To Ask About Netbooks