While big-name security suites such as Norton and McAfee dominate the market, there are others out there that may be just as good -- or better. We look at five alternative security suites.
Serdar Yegulalp
Contributor
November 06, 2007
ZoneAlarm Internet Security Suite
The ZoneAlarm product used to just be a firewall, not a security suite that includes anti-virus, spam protection, and a host of other features. The original ZoneAlarm firewall-only product is still available in various iterations (including a simplified free version), but ZoneAlarm's creators also publish ZoneAlarm Internet Security Suite. It's a firewall plus it has antivirus, e-mail protection, and privacy and parental controls, and a number of other things, all available in a fully-functional 15-day trial version.

ZoneAlarm's firewall remains outwardly familiar to anyone who's used the product before, although over several revisions it has gained various refinements to its functionality. In the default security mode, it spends 21 days learning about what applications you use, and then automatically switches over to the high-security mode (which can be manually overridden if you like). This also reduces the number of false alarms you might get. Apps that have binaries that change frequently also can be tagged by the user to keep from generating more false alarms. One adjunct to the firewall is the "OSFirewall," which guards against applications changing key system settings, such as which programs load at startup. In high-security mode, any programs that try to do this will be flagged by ZoneAlarm for your explicit approval. 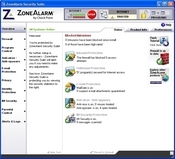 (click image to see larger view)
ZoneAlarm Internet Security Suite
Check Point Software Technologie
$49.95 for 1 PC/year
$59.95 for 3 PCs/year
View the image gallery
Most security suites now treat viruses and spyware as the same sort of threat; ZA is no exception. To further guard against spyware, ZA can block specific Web sites that attempt to install something malicious, and the user can always single out specific programs or sites to be exempted from such treatment. ZA's e-mail scanning works with any POP3/SMTP mail client, although its spam filter only works with Outlook and Outlook Express, which is a little disappointing. The spam filter itself is fairly flexible and configurable, although it includes a few features I don't see many people bothering with -- like the "challenge" function, which responds to suspect e-mails with a message asking the sender to confirm they're a human being. (Does anyone even use this sort of thing anymore?)

Another major feature ZoneAlarm boasts is personal data security. The program's encrypted "myVAULT" lets you store things like credit card information or other personal data that you don't want transmitted over the Web in the clear. Known-good sites such as eBay and PayPal (which are preconfigured) can be exempted from this. My only problem with this particular feature is that you have to manually punch in the data to be protected -- which some people may simply not bother with -- but I doubt there's any feasible way to trap those sorts of things automatically. I also liked many of the little features scattered through ZA: "Game Mode," activated by right-clicking the tray icon, silences all alerts with either an automatic allow or deny response so the user can run games or other full-screen activities without being interrupted.

The IM security module also lets you block IRC connections if desired, and add a layer of encryption to IM communications. The parental-control system uses a predefined category list to let you choose what to block, but it doesn't allow much fine-grained control: you can't block everything and then selectively unblock certain sites, which seriously limits its usefulness.

My single biggest complaint with the program centers around several aspects of its performance. The program took several seconds to kick in and allow user interaction after a logon, and the program's own UI would sometimes become unresponsive. Calling up the main overview pane sometimes takes several seconds to render; ditto some of the informational screens (like the safe applications list).

There's one thing that I can't deny about ZoneAlarm: the price is excellent. A year's protection for a single PC is $49.95, but you can buy protection for three computers for $59.95 -- perfect for households or small workgroups.