You might think storage using miniature drive cages isn't fast enough and doesn't have sufficient capacity to be practical. But you'd be wrong, says columnist Eric Hall.
Eric Hall
Contributor
September 20, 2006
For benchmarking purposes, I used random-read tests from HD Tune 2.52, HD Tach 3.0.1.0, and Everest 3.01. To establish a baseline, I tested a basic Western Digital WD800JD Caviar SATA-II drive on the Intel ICH7R controller, which yielded an average transfer rate of 49.7 MB/s and a maximum burst rate of 122.7 MB/s (all numbers are from HD Tune except where noted). By comparison, a single Fujitsu MHV2040BH drive on the same system reported a mere 27.3 MB/s average transfer rate with a burst rate of 84.8 MB/s. Clearly, laptop-grade drives that are used in isolation are about as weak as most people expect.

But when they are put into a RAID-10 or RAID-5 array where the multiple spindles can be used to increase read and write performance, throughput numbers jump considerably. For example, when the Fujitsu drives were used in a RAID-5 array with 128 KB strip sizes on the ICH7-R controller, they returned an average transfer rate of 71.6 MB/s with a maximum burst rate of 941.5 MB/s--a 44% increase in average transfer performance, and an eight-fold increase in burst transfers over the lone Caviar. I should note that these remarkably high burst transfers did not appear in any combination of equipment or strip sizes, and may be a result of optimization within the drives.

Meanwhile, the Seagate ST9160821AS drives in the same configuration returned an average transfer rate of 80.1 MB/s and a maximum burst rate of 94.5 MB/s, which is over twice the average throughput of the Caviar drives, but with a slightly lower burst rate. Given the similarities between the Seagate and Fujitsu drives, my guess is that the higher sustained throughput numbers are probably due to the use of perpendicular recording technology on the Seagate drives, which produces much higher data density. 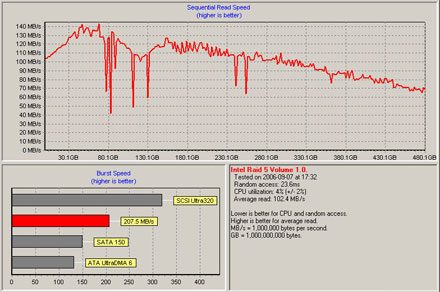 These are pretty impressive numbers for a "laptop RAID," and dispel the myth that these drives are unusable for general purpose applications. Granted, these drives cannot reliably keep a gigabit Ethernet pipe consistently full, but that's not really the appropriate measure either. Instead, if you compare them to the performance of a single workstation-grade SATA drive, then these numbers show that the laptop drives are more than capable of delivering far better performance in the same amount of physical space--as long as they're arranged into an array that will utilize the multiple spindles, anyway--and make a good alternative for those kinds of uses.

And since that describes the majority of my systems--most of which have a limited number of exposed drive bays and are therefore usually constrained to one or two disks--this means that most of my systems are actually good candidates for this kind of solution. Only a few of my machines have enough bays to hold four full-sized drives to get the full benefit of RAID-10 or RAID-5, while these micro-drive boxes provide a nice alternative that uses less space and power, but does not require sacrificing performance.

The only remaining argument against this solution is price. Since laptop drives are 20% to 50% more expensive than their desktop counterparts, and since you'll need to include the cost of the drive cage ($175 retail for the QuadraPack Q14), you're looking at a significant cost increase over workstation-grade SATA drives. However, the entire solution is only slightly more expensive than a single enterprise-grade SAS drive that would only provide a fraction of the storage capacity and none of the reliability of a RAID array, meaning that it is still a pretty good deal.