Find sitting on the beach boring? Can't tear yourself away from technology? Here are some great new gadgets that can make your summer fun.
David DeJean
Contributor
May 25, 2007
Coming Attractions
Not every blockbuster summer gadget debuted before Memorial Day. There are some great things still in the pipeline. Here are three in particular that we wanted to include in the Gadget Guide, but they just aren't available right this minute. So we'll just have to wait.

I Wanna iPhone
The Übergadget for Summer 2007 isn't expected to appear until... Well, "late June" is all Apple is saying, but Web sites like the Boy Genius Report have been buzzing with speculation that the iPhone will go on sale June 15th via AT&T (formerly Cingular). At any rate, the iPhone promises to be not just one insanely great gadget, but three: an innovative mobile phone, the next step in iPod technology with touch controls, and a handheld WiFi device with the first truly creative approach to wireless e-mail since the BlackBerry. Summer may be over before you can get your hands on one, though. Advance orders have been heavy, even at the anticipated price -- $499 or $599, depending on the amount of memory -- and that's with a two-year contract. 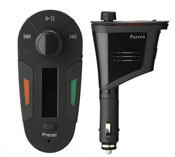 (click image to see larger view)
Parrot PMK5800 Car Kit
approx. $120
View the image gallery
Bluetooth Direct To Your Radio
Two-piece is for swimsuits. When it comes to Bluetooth car kits, one-piece is the way to go. Later this summer, Parrot, the French company that is all things Bluetooth, will roll out a one-piece Bluetooth car kit. The PMK5800 will plug directly into your car lighter socket and transmit via FM to your car's sound system, streaming your tunes and phone conversations from your handset wirelessly, no installation required. Its microphone uses DSP, echo and noise cancellation, and the unit provides full duplex sound. It employs voice recognition so you can dial calls by name, and it wraps it all up in a package that can go in the glove compartment when you get to the beach -- or in your pocket when you switch cars. You'll be able to buy it from Parrot and other online retailers for about $120.