Inside Eight Game-changing MOOCs
(click image for larger view and for slideshow)
Canvas learning management system (LMS) maker Instructure has introduced an open directory of educational apps, which can be used with any system that implements a standard application embedding format, as it prepares to launch its own integrated app market.

Instructure promises to deliver the App Center, pre-stocked with more than 100 apps, including WordPress, Khan Academy, Dropbox and Evernote, at its user conference in June.

When it arrives, the Canvas App Center is supposed to deliver "one-click" simplicity for the instructor who wants to install an app into the learning workspace for a course. However, the content displayed within the App Center -- the directory of embeddable tools that support the Learning Tools Interoperability (LTI) specification -- will be pulled from edu-apps.org, a website Instructure is launching now.

Although the IMS Global Learning Consortium that developed LTI has a basic listing of compatible products on its website, Instructure co-founder and chief product officer Brian Whitmer saw the need for a searchable catalog with user reviews included. IMS has been talking about creating a richer directory of LMS apps, but those talks were just getting started and Instructure decided it couldn't wait, he said. At the same time, Instructure recognized the directory would be more attractive to participating vendors if it were open, rather than specific to Canvas.

"We're trying to do this an interoperable way," Whitmer said. "We're taking open submissions, and a product will be approved as long as it works in LTI." The website itself is being delivered with an open application programming interface (API), meaning that it will be possible for other learning management systems such as Moodle to hook into the learning tools catalog the same way that Canvas will, he said.

"Our competitors in this space will of course be skeptical of our motives," Whitmer acknowledged. The site was set up with a ".org" domain partly to signal the purity of those motives, and it's possible that Instructure could turn the site over to IMS at some point to make it independent, he said.

At the same time, Whitmer added that rival LMS firm Blackboard actually has an app listed in the directory, a Web conferencing tool that can be used independently. "They were totally fine with adding that to the directory," he said. 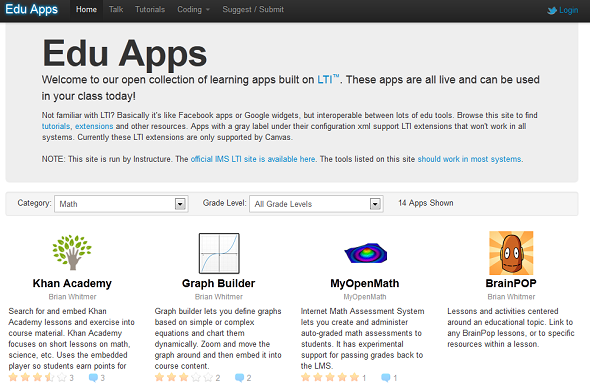 A directory listing of math apps that conform with the LTI specification.

Follow David F. Carr at @davidfcarr or Google+, along with @IWKEducation.