SEARCH
A minimum of 3 characters are required to be typed in the search bar in order to perform a search.
Announcements
Alert
Got some free time? Grow your knowledge from the comfort of your computer for FREE!
Alert
Are you looking to stay on top of IT trends? Check out our FREE webinars and virtual events!
Alert
Planning for 2023? Be sure to check out our upcoming in-person events!
Report
How does your salary stack up? 2022 IT Salary Survey Results Revealed
PreviousNext
Mobile Devices
2 MIN READ
News

Augmented reality describes a view of the real world that includes superimposed graphics. Typically, this is done by projecting images on a screen between the viewer and his or her view--a screen such as lenses in a pair of glasses. It can also be done by adding dynamic graphics to a live video scene, as many smartphone apps do. Some military and medical applications of the technology rely on images projected directly on a person's eye. 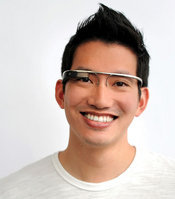 "A group of us from Google X started Project Glass to build this kind of technology, one that helps you explore and share your world, putting you back in the moment," explained Google engineers Babak Parviz, Steve Lee, and Sebastian Thrun in their post. "We're sharing this information now because we want to start a conversation and learn from your valuable input. So we took a few design photos to show what this technology could look like and created a video to demonstrate what it might enable you to do."

The existence of Google X was first disclosed late last year and reports that the researchers there were exploring augmented reality surfaced in February.

This is the first time Google has officially acknowledged this particular project.

Writing for the New York Times, Nick Bilton notes that Babak Parviz is known for creating contact lenses embedded with electronics, which suggests that Google's augmented reality might be available in a form factor smaller than sunglasses at some point.

Google has posted a video on YouTube (embedded below) that explores how the glasses might work. The scenes shown are not actual production footage of the glasses in the field. They're augmented with post-production graphics that show how Project Glass might work. But the video conveys what Google hopes to achieve: a seamless experience where the technology enhances activities and doesn't interfere with them.

See the future of business technology at Interop Las Vegas, May 6-10. It's the best place to learn how cloud computing, mobile, video, virtualization, and other key technologies work together to drive business. Register today with priority code CPQCNL07 to get a free Expo Pass or to save 25% on Flex and Conference passes..