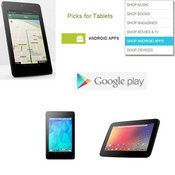 10 Great Android Apps For Tablets
(click image for larger view and for slideshow)
During the first quarter of 2013, the number of apps downloaded by smartphone owners jumped by 11% when compared to the fourth quarter of 2012. A total of 13.4 billion apps were downloaded across the four major app stores run by Apple, BlackBerry, Google and Microsoft. The revenue generated by those apps, reports Canalys, grew at a slightly slower pace of 9% when compared to the previous quarter. However, the total dollar figure generated by those app downloads amounts to a staggering $2.2 billion spent on mobile apps.

The Apple-Google duopoly isn't a duopoly, however, when you look at the revenue. Apple controls 74% of all app revenue. That means out of the $2.2 billion generated by app downloads during the first quarter of the year, Apple raked in $1.63 billion. If you consider the 70-30 split that Apple has with developers, Apple paid its developers approximately $1 billion and kept more than $600 million for itself.

With Apple controlling such a huge portion of the app ecosystem revenue, it's no wonder that many developers still write iOS apps first and Android apps second.

[ Can the One save HTC's bacon? Read For HTC, The One Can't Come Soon Enough. ]

"Apps have had a huge impact on the way consumers use mobile devices, what they value, and what they expect from smart phones and tablets," said Adam Daum, chief analyst of analytics for Canalys. "They are now central to how consumers engage with content and connected services, and how they personalize their devices around the app-enabled features that are important to them. This is a multi-billion-dollar growth market, with more and more consumers around the world now comfortable and confident in finding apps, downloading them and making in-app purchases, on a growing addressable base of smart phones and tablets."

Emerging markets, such as South Africa, Brazil and Indonesia, posted the biggest growth numbers, as smartphones are still gaining strength in those regions. North America and Europe are seen as mature markets, but still posted moderate growth. North America, for example, saw revenue and download volumes increase by 8% and 6%, respectively.

What remains to be seen is whether BlackBerry or Microsoft can break down the Apple-Google duopoly with their respective platforms and app stores. Both have a long, long way to go.

Mobile technology is changing the way we live, work and play. Attend Mobile Commerce World , June 24-26 in San Francisco, to learn how to develop and deploy your company’s mobile commerce strategy. Spend three days learning from key players at Walmart, Amazon, Zappos, 1-800-FLOWERS, Advance Auto Parts, Alex and Ani, Groupon, REI, Vegas.com and more who are harnessing the power of mobile commerce. Register with code MP_BTMEDIWKAXE and save $200 on an All Access pass.