SEARCH
A minimum of 3 characters are required to be typed in the search bar in order to perform a search.
Announcements
Alert
Got some free time? Grow your knowledge from the comfort of your computer for FREE!
Alert
Are you looking to stay on top of IT trends? Check out our FREE webinars and virtual events!
Alert
Planning for 2023? Be sure to check out our upcoming in-person events!
Report
How does your salary stack up? 2022 IT Salary Survey Results Revealed
PreviousNext
Mobile
9 MIN READ
News

The Good And Bad Of Tablets At Work

From stakeouts to burger orders, tablets are taking charge. And Windows 8 could add even more use cases.
Michael Endler
Associate Editor, InformationWeek.com
June 12, 2013
As people pile into a restaurant called Stacked, tucked in a San Diego mall around the corner from a Lego Store, it's easy to tell newbies from repeat customers. Veterans chat or watch sports while they wait for a table. The uninitiated gawk at people who've already been seated, watching them pass an iPad around each table to tap and swipe in their orders. The iPad has a ruggedized case and a credit card reader, and it's locked down to run only one app: Stacked's proprietary menu, ordering and payment system.

Stacked started in Torrance, Calif., in 2011 with the idea of serving highly personalized pizzas and burgers by letting people tap their complex orders into an iPad. The iPad offered a bit of novelty, too. But the tablet has delivered unexpected benefits, says Stacked co-CEO Paul Motenko: Orders get to customers about five minutes faster than they did without iPads, and 86% of guests say the iPad enhanced their experience.

Motenko also gets any bad news quickly. Stacked's app invites guests to fill out an electronic comment card as they check out, and each location receives around 1,000 weekly submissions. A complaint automatically triggers an alert to the manager. "We have the opportunity to try to make it right before the guest leaves the restaurant," Motenko says.

We're still learning a lot about tablets -- what benefits they bring to business, where they don't work and what their limitations are. While iPads led the way, Android- and Windows-based devices are finding homes, sometimes creating new use cases.

Tablets, in short, are getting to work, and often doing much grittier tasks than taking pizza orders. The Drug Enforcement Agency, for example, is testing Dell Latitude tablets for its agents to use on stakeouts, and it could eventually distribute 6,000 of the devices to its employees,says Mark Shafernich, the agency's CTO. "We want [our agents] on the street, making cases," says Shafernich. Instead, DEA agents spend about one week out of every month filling out paperwork in the office. "We've got 25% downtime, where they're not surveilling bad guys," he says. But with the Latitude tablets, "guys can type at 3 in the morning, while watching a dark apartment waiting for someone to come out." The tablets should also let the DEA reduce the number of desktop computers it maintains. The Latitude tabs -- less expensive and more mobile than laptops and equipped with a vivid screen that's ideal for scrutinizing intelligence photos -- represent a "game-changing" consolidation of technology, Shafernich says.

Most of an agent's work is done in Windows 7 via a virtual desktop infrastructure, so Shafernich didn't wrestle with whether Windows 8's controversial touch-centric tiles interface is a boon or bust. Agents expressed interest in iPads, but whereas the Latitudes boast a range of peripherals that let them function as secure laptop replacements, iOS doesn't even support mouse input. Plus, Shafernich says, "the iPad has a sexy user interface. But this is virtual desktop, so that sexiness goes away."

A full tablet deployment could save the DEA around $5 million in annual IT costs. And if the devices make agents more productive, substantial labor savings might also be in the cards. "We don't have money to do anything right now, with sequestration, but we're doing this," Shafernich says. "It's worth making the investment."

General Electric is looking to tablets to improve its factory operations and provide a new revenue source. Randy Rausch, general manager of GE Energy Storage, has been using iPads for the past year to help workers make better decisions on the factory floor. "If something is going wrong, we want to know as soon as we can, so we're invested in getting people information at their fingertips," Rausch says. Whereas supervisors used to sit in control rooms watching monitoring equipment, they can now use a tablet to carry that information wherever they want.

Monitoring, however, is only the first and simplest stage of tablet use, says Mark Bernardo, who heads development of automation software for GE Intelligent Platforms, the software unit that built its corporate sibling's iPad-based factory system. The second stage will be automatically delivering the right information to the right person. "No monitoring -- they'll just be notified if there's something they need to pay attention to," says Bernardo, who adds that the ability to "take the control room wherever I am" translates to a productivity boost because it facilitates faster decision-making, cutting down back-and-forth between workers on the floor and those in the control room if a piece of machinery breaks down, for example. Tablets also let managers spend more time on the floor and gain greater visibility into daily operations.

GE is finding new benefits now that it has iPads in employees' hands. Maintenance workers are using the tablets' cameras to consult with one another about repairs, and field workers can use the devices' photo and geolocation tools to document their work.

Mobile apps will only grow in importance as sensors gather more and more accurate data, letting companies draw on environmental context like location and combine it with other data from enterprise systems, from sales to scheduling.

It's a great vision, but there are limits to tablets' growth potential.

In January, an ABI Research study predicted that although tablets will further cannibalize PC sales in 2013, the devices' business uses will be mostly confined to environments that previously "worked without the benefits of computing technologies." Think of Stacked replacing its paper menus or airlines replacing the 40-pound paper flight-plan books they used to give pilots before every takeoff. Moreover, if one's work involves writing code, typing reports, using Photoshop or dealing with spreadsheets, Apple iOS and Android options range from compromised to unacceptable. As a result, some have dismissed tablets as PC companions but not replacements at work.

Windows 8, currently fighting for Apple and Android tablet scraps, could be the operating system that upends that assumption. Yes, Win8's revamped user interface has been divisive. The new look provoked ire for replacing Windows 7's Start Menu with "Charms" that remain hidden until a user swipes them into view. Microsoft execs now admit that the OS imposes a problematic learning curve, but Windows still holds a trump card in business over its rivals: access to legacy applications, most notably Office. That card hasn't translated to significant market share yet, but Win8 tablets are getting a close look.

In a 2012 pilot, Seton Hall University equipped one-third of freshmen and juniors with Samsung Series 7 tablets running Win8. The school handled the OS unfamiliarity by mandating a brief training session, after which students "took to Windows 8 immediately," says Seton Hall CIO Stephen Landry, with three-quarters preferring it to prior Windows versions. This year, Seton Hall plans to give each first- and third-year student a Lenovo ThinkPad Helix, a tablet that docks into a keyboard to double as a laptop. During previous trials, students said they couldn't be productive with Android tablets. But with the Helixes, the students will have "all the tools they want and need," Landry says.

Detachable laptop-tablets such as Helix represent a "sweet spot," says Seton Hall associate CIO Paul Fisher, adding that Microsoft Office will be important until Internet connections are ubiquitous. "Google Apps doesn't meet student needs," Fisher says. "If an athlete is on the bus, and has a paper to turn in when he gets back, he needs to be productive."

Near Houston, meanwhile, Clear Creek Independent School District is planning to deploy as many as 30,000 Dell Latitude tablets to students, teachers and staff. CTO Kevin Schwartz has overseen iPad deployments in the past but chose the Latitude because of its ability to dock with a keyboard. Students also strongly favored the Latitude in a bake-off of options. "There really is a better device now than there was a couple years ago," Schwartz says.

Budget reality means companies often can't afford the ideal technology, so they opt for the one with the fewest trade-offs. When Win8 launched, most devices based on it were relatively expensive and, combined with a foreign interface and weak app library, didn't woo customers from an iPad or a laptop. Now that some Win8 tabs cost less than entry-level laptops and the platform is better supported by developers, the device is more interesting.

Schwartz says deploying the same number of laptops would have cost twice what the Latitudes will, reinforcing the idea that even if tablets aren't perfect PC replacements, they've become too capable and economical to ignore. For schools and others on tight budgets, the fact that tablets add features such as touch interfaces and mobile apps is almost a bonus. For others, mobility is the complete appeal, with word-processing capabilities an afterthought.

Why Mobile Commerce Is Moving Forward

Among the research findings:
Get This And All Our Reports

When United Airlines replaced its paper flight-plan books with iPads, the payoff came from ditching 40-pound kits of binders and gear with a 2-pound tablet and case. That small weight savings cut 326,000 gallons of fuel a year, along with 16 million sheets of paper. But the fact that the swap could be done with a low-cost consumer device was crucial. The iPad price "was significantly lower than what we'd seen in the past, much lower than a typical solution straight out of the aviation industry," says Jon Merritt, senior manager for flight operations and IT at United Airlines. "It was something doable, within our reach to show ROI for the company."

And that's really the point: Tablets signify new choices, and the choices will keep getting more complicated and more interesting. For some industries, like the airlines, tablets represent a chance to replace paper. For other roles, like sales and field customer service (or crime fighters), tablets likely will dominate because they're so much better than the existing laptop option. And for knowledge workers (or students), the old dissenting refrain that tablets are good for content consumption but not for creation might not hold for long.

IT leaders must guide their companies through these choices as computing tasks increasingly are distributed across smartphones, tablets, laptops and desktops. Windows and OS X have been joined by iOS, Android, BlackBerry 10 and others, and technologies such as desktop virtualization and cloud software and infrastructure further erode our reliance on the traditional PC. As the lines blur between these form factors, and with new wearable alternatives such as watches on the horizon, it will become more difficult to define what counts as a computer. In those fuzzy situations, IT has to ditch its preconceptions and help companies find what works best. 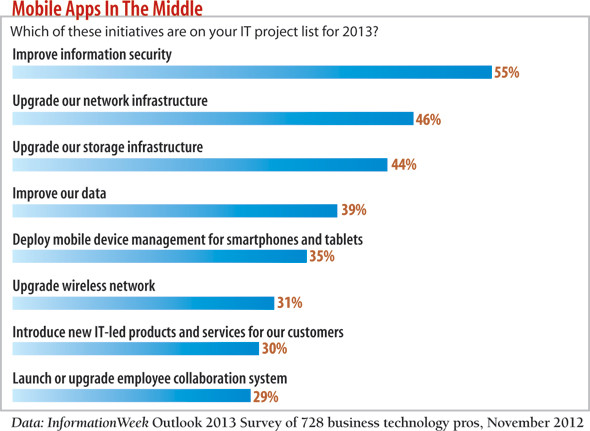