Despite the US government's efforts to increase access to public information and expectations that technology would help, federal agencies are having a hard time processing Freedom of Information Act (FOIA) requests and sharing information with citizens via their websites, according to a report released by the Center for Effective Government (CEG).

The report, "Making the Grade: Access to Information Scorecard 2014," found that agencies have consistently failed to implement the FOIA, a law passed almost 50 years ago to give Americans greater access to government records. The CEG evaluated 15 agencies that received more than 90% of all FOIA requests, based on three performance areas: speed and completeness in processing requests, disclosure rules, and the usefulness of agency websites. None of the agencies earned a top overall grade of an A, and half got failing grades.

Only eight agencies passed, earning grades of 60 or more out of 100 points. The Social Security Administration (SSA) was the top performer with a B grade (83%). It was best at processing FOIA requests. Less than 1% of its requests were backlogged, and the average response time was under the required 20 business days. The SSA, however, earned low scores for its rules and website.

[An Open Data Policy is a good step, but agencies need to do more to liberate their data. Here are six suggestions: How Government Can Make Open Data Work.]

The Department of Justice (DOJ) earned the second-highest grade, B- (81%), for having a solid website and an effective policy on withholding information. The Environmental Protection Agency (EPA) came in third with a C+ (78%), also earning the best scores for its rules and website. The Department of Agriculture (USDA) got a C (77%), joining the DOJ and EPA as the only three agencies to receive passing marks in all the areas examined. 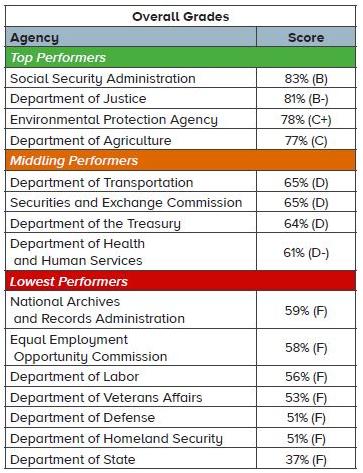 The CEG gave four agencies -- the Department of Defense, Securities and Exchange Commission, Department of Transportation, and Department of the Treasury -- a failing grade because they missed most of the criteria for their websites, specifically having weak electronic reading rooms. Agencies are required to have electronic reading rooms, which are also known as FOIA libraries, on their websites to provide the public with information about previously released documents.

Allowing the public to file and track requests electronically should be a basic part of agency sites, the CEG said. While many agencies allow online submissions for FOIA requests, most don't have online tracking available. The report recommended that agencies deploy open-source or off-the-shelf technology to enable full online services for site visitors. It also recommended agencies streamline processing workflows, disclose information more proactively, and train staff to reduce the use of exemptions.

The report also pointed to the Obama administration's efforts to build a government-wide FOIA portal. In December, the administration introduced nearly two dozen plans to improve the government's interaction with citizens, as part of the Second Open Government National Action Plan (NAP). The new NAP proposed the creation of a consolidated request portal where citizens can file a request for any agency, while standardizing FOIA regulations and establishing common practices across agencies.

The House of Representatives also helped advance FOIA modernization efforts when it approved HR 1211, the FOIA Oversight and Implementation Act of 2014, on Feb. 26. The bill aims to strengthen the FOIA process to increase transparency and accountability in government. Among other improvements, the FOIA Act specifies the "existence of one free website," which would be used for submitting requests and for receiving automated information on the status of FOIA requests.

Mobile, cloud, and BYOD blur the lines between work and home, forcing IT to envision a new identity and access management strategy. Also in The Future Of Identity issue of InformationWeek: Threats to smart grids are far worse than generally believed, but tools and resources are available to protect them (free registration required).

Elena Malykhina began her career at The Wall Street Journal, and her writing has appeared in various news media outlets, including Scientific American, Newsday, and the Associated Press. For several years, she was the online editor at Brandweek and later Adweek, where she ... View Full Bio
We welcome your comments on this topic on our social media channels, or [contact us directly] with questions about the site.
Comment  |
Email This  |
Print  |
RSS
More Insights
Webcasts
Cloud Security Threats Enterprises Need to Watch
Are You Ready for When Cyber Attackers Get In?
More Webcasts
White Papers
NetFlow vs Packet Data
[Exclusive InformationWeek IT Trend Report] The Cloud Gets Ready for the 20's
More White Papers
Reports
Can You Spare 10-12 Mins to Help Us Out with a Survey on Tech Trends?
Got 7 Minutes? Dark Reading Needs Your Help With Our Survey on Incident Response
More Reports

"The CEG gave four agencies -- the Department of Defense, Securities and Exchange Commission, Department of Transportation, and Department of the Treasury -- a failing grade because they missed most of the criteria for their websites, specifically having weak electronic reading rooms."  Actually, these agencies did not receive an overall failing grade, as indicated in the chart and your earlier sentence, "Only eight agencies passed, earning grades of 60 or more out of 100 points."  These agencies did receive a failing grade in one or two of the performance areas.
Reply  |  Post Message  |  Messages List  |  Start a Board

These scores on FOIA suggest that agencies can make information more readily available to the public if they wanted, but still exempt too much information from public view and drag their feet when they do get a request.
Reply  |  Post Message  |  Messages List  |  Start a Board
Editors' Choice
Hot Topics