50%
Tweet
HTC's Droid DNA for Verizon doesn't have much in the way of business-oriented features and might be too big for some hands, but it's powerful, well-built, graced with a gorgeous 1080p screen, and priced right.

HTC bills its Droid DNA as the most advanced smart phone yet. That's a major claim to make, and of course it's certain to be untrue by this time next year. But what HTC has delivered sits nicely alongside the Motorola Droid M -- and the other recent Droid models -- as an upscale consumer-oriented, as opposed to business-oriented, Android Jelly Bean-powered smart phone. At $199 with a new two-year Verizon contract, it's in the same price range as high-end Droid phones like the Maxx.

For those who complain about how big smart phones are getting, the 142-gram (5-ounce), 141-mm-by-70.5-mm DNA is at the outer limit of a phone that can be held comfortably in one hand. The 5" screen alone is big enough to swallow the entire body of the Droid M whole -- probably inevitable given the DNA's specs of full-HD 1080p and 440 ppi FHD. But the DNA is also incrementally slimmer -- 9.73 mm tapering to 4mm -- without the unpleasantly flimsy feel of some current smart phones. The Gorilla Glass face has a rounded-down outer edge that makes swipe and fling actions feel all the more comfortable. And the guts of the phone are also impressive: a quad-core 1.5-GHz Snapdragon S4 processor, 2 GB of RAM, 16 GB of internal storage, and the usual array of sensors and connectivity features such as Bluetooth 4.0, NFC, HDMI via MHL, and so on. 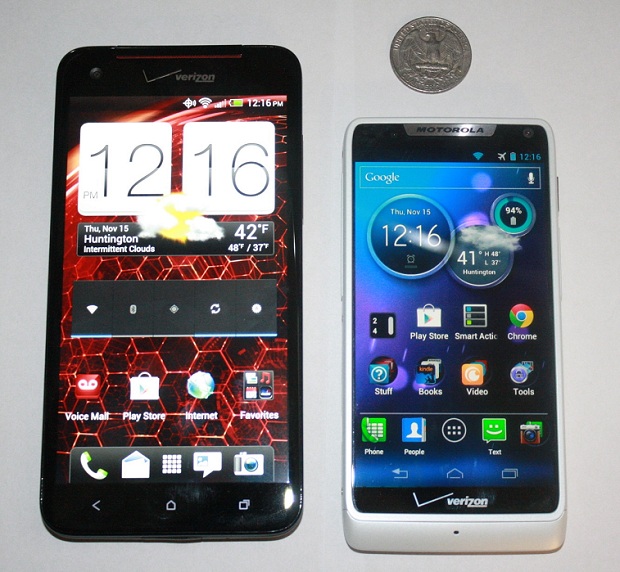 An entire Motorola Droid M fits in the footprint of the HTC Droid DNA's screen -- but what a great screen it is.

On the downside, I wasn't impressed with the lack of a memory card slot -- it's built-in 16 GB or nothing -- and the awkward flex cover for the USB power/data connector. I wondered if that was created as an incentive for more people to use the wireless charging function. Also awkward is the placement of the power button on top, where it's a little hard to reach given the size of the phone, and the lack of any other buttons save the volume rocker. Finally, the SIM card can only be removed with the aid of an included tool, and the 2020 mAh battery's not user removable either, but I'm used to seeing both of those things in late-model smart phones.

The phone's screen is the big attraction, and not just for its full 1080p resolution, but its brightness and color. I was dubious about how comfortable it would be to watch native HD content on such a screen, but clarity and sharpness are top-notch. I watched an hour or more of videos without eyestrain. However, including Beats Audio in the DNA (as with many other HTC phones) isn't much of a selling point for me. It consists of little more than a dedicated headphone amp subsystem and custom-tuned EQ setting, and it's good that it can be turned off because not all music benefits from the bass-boosted sound it delivers.

HTC has its own UI skin for Android, called Sense+. It isn't quite as smartly put together as Motorola's Ice Cream Sandwich interface for the Droid M, which I'm realizing in retrospect now is very well thought out indeed, but Sense+ does the job and doesn't get in the way to the degree that, say, Samsung's Android interface did. Smart touches abound in Sense+, like the quick access to system settings from the main pull-down menu, or the quick access to frequently-used apps from a subdivision of the app menu. I tend to clutter my phone's home screens with icons, so this is a welcome feature. Also included are HTC's custom gestural controls, which can be enabled or disabled. I especially liked the one where you turn the phone over to activate the speakerphone.

The DNA is 9.73 mm at its thickest, tapering to a mere 4mm on the edges. Note the SIM card slot at left, which can only be opened with an included tool.

The cameras in the DNA also resemble the cameras in HTC's Windows Phone 8 devices -- a massively wide-angle (88°) front-facing 2.1-megapixel camera, and a full HD 8-megapixel main camera. Because there's no dedicated camera button, the camera has what's called Sightseeing Mode. If the camera is the currently active application when you press the power button, the lock screen is bypassed and you go directly to the camera, ready to shoot with no waiting.

A few explicitly business-oriented features ship with the DNA. The most obvious and useful is the built-in mail app, which can work natively with Microsoft Exchange ActiveSync, Windows Live Hotmail, Yahoo!, AOL and any generic POP3/IMAP email source. Gmail can be added manually as an IMAP service, or through Google's native Gmail app. Alas, there's no device-level encryption, a necessary feature for any business-class AnDroid product.

Also included is a pre-loaded instance of American Express's Serve app, its version of a PayPal-like electronic payment service, which might well come in handy for travelers trying to manage spending. There's also unfortunately a fair load of apps you might want nothing to do with such as Zappos and NFL Mobile, but mercifully most of those can be disabled.

HTC's newest entry in the Droid lineup for Verizon doesn't have much in the way of business-oriented features and might be too big for petite hands, but it's a well-built and powerful; sports a gorgeous 1080p display; and is priced competitively.

Price: $199 with two-year Verizon contract.; $599 full retail price
Pro: Con:
We welcome your comments on this topic on our social media channels, or [contact us directly] with questions about the site.
Comment  |
Email This  |
Print  |
RSS
More Insights
Webcasts
Are You Ready for When Cyber Attackers Get In?
Linking, Orchestrating, and Managing Your Enterprise Security Systems
More Webcasts
White Papers
Using AI to Power AppSec
NetFlow vs Packet Data
More White Papers
Reports
Can You Spare 10-12 Mins to Help Us Out with a Survey on Tech Trends?
Got 7 Minutes? Dark Reading Needs Your Help With Our Survey on Incident Response
More Reports