Open source software giant Red Hat announced Friday plans to acquire Ansible, an open source provider of IT automation and DevOps solutions for deploying and orchestrating public, private, and hybrid cloud solutions. Red Hat plans to integrate those capabilities into its own IT automation lineup and continue to support the company's standalone offerings.

Terms were not disclosed, and a spokesperson declined to comment on price. However, VentureBeat reported the deal was worth more than $100 million. The company has about 50 employees. Its cofounder and CEO, Saïd Ziouani, is a former executive at Red Hat.

Ansible already has some heavyweights as customers. They include Evernote, Twitter, Weight Watchers, EA Sports, and Verizon. Ansible says it works with 20% of the Fortune 100. Red Hat executives cited Ansible technology's ease-of-use and speed as big drivers of the deal.

Simplifying multiple cloud deployments is no small feat. It's a complex task to get cloud services and cloud applications to work together. That's probably why market research firm IDC reported that the cloud systems management software market hit $2.3 billion in revenue in 2014, growing nearly 30% over the previous year. 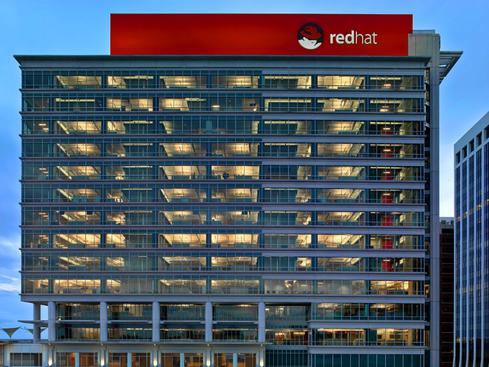 In a blog post, Red Hat's Alessandro Perilli, general manager for cloud management strategy, explained that automation enables IT organizations to address the demand for speed and simplicity from their lines of business.

"The ultimate ambition of IT organizations worldwide is to offer their lines of business a fully automated provisioning of entire application stacks, through virtual machines or containers or 'service orchestration,'" he wrote in his Oct. 16 post.

This acquisition is designed to enable that. It is aligned with Red Hat's existing lineup of IT automation tools intended to make it easier for enterprise customers to consume open source offerings, he said.

Joe Fitzgerald, vice president of management at Red Hat, called Ansible a leader in IT automation and DevOps.

"Red Hat is transforming IT management, driving innovation that is 100% open source, built on an open management platform, and relentlessly focused on reducing cost and complexity through ease of use and automation," he said, in a prepared statement. "I am thrilled to welcome Ansible to Red Hat to help us expand that commitment."

Ansible supports both Linux and Windows environments. Through its 400+ modules it extends support to a wide range of clouds and cloud applications. Integrations include Amazon Web Services (AWS), Docker, OpenStack, and Red Hat.

Last week at AWS re:Invent, Ansible announced the integration of multiple modules to provide greater accessibility and ease-of-use within AWS, including AWS Identity and Access Management modules. The company said that users could now create playbooks to automate tasks such as creating AWS users, groups, roles, and policies.

Ansible is a recent entry into the configuration management market. Founded in 2013, it received funding from Menlo Ventures and E.Ventures. It competes with Chef and Puppet Labs. The company is based in Durham, N.C., about 25 miles from Red Hat's headquarters in Raleigh.

"We're thrilled that Red Hat, a global leader in open source, has chosen Ansible to tackle the future of IT automation and systems management," Ansible's Ziouani said in a prepared statement. "This is a strong validation that Ansible's simplicity, enterprise customer base and robust community [are] winning in enterprise IT automation, from compute to networking, to cloud, to containers."

Jessica Davis is a Senior Editor at InformationWeek. She covers enterprise IT leadership, careers, artificial intelligence, data and analytics, and enterprise software. She has spent a career covering the intersection of business and technology. Follow her on twitter: ... View Full Bio
We welcome your comments on this topic on our social media channels, or [contact us directly] with questions about the site.
Comment  |
Email This  |
Print  |
RSS
More Insights
Webcasts
Unifying Your Endpoint Security Strategy
Leveraging Infrastructure as Code to Streamline Security & Operations
More Webcasts
White Papers
Gorilla Guide Extended Detection and Response
How Secure Are Your Endpoints?
More White Papers
Reports
Why You're Wrong About Operationalizing AI
A Practical Guide to Enabling 5G Deployments
More Reports