At the Convergence conference, Microsoft missed chances to distinguish its Dynamics ERP and CRM tools from rivals.

Microsoft Business Solutions, the unit behind Dynamics CRM and ERP applications, has plenty of good cards to play, but it didn't use them to their best advantage at this week's Microsoft Convergence Conference in Atlanta.

Microsoft is second only to Amazon in terms of the scale and maturity of its cloud infrastructure, for example, yet that strength was underplayed here, with little emphasis on its hybrid deployment options and freedom of choice. Instead we heard a rather generic-sounding keynote about the customer-centric era we're all living in. Ho hum.

There were plenty of things Microsoft could brag about here. But the company too often sounded like a me-too rather than underscoring how it stands out. Here, then, are some rants and raves about Microsoft's ERP and CRM world.

Rant: Stop channeling Salesforce.com CEO Marc Benioff. Microsoft gives you the option of running CRM in the cloud or on-premises, and you don't have to be a $50-million-per-year Salesforce.com "Superpod" customer in order to have options. With privacy- and security-minded financial services and NSA/Prism shell-shocked multinationals and European companies increasingly wary of U.S.-based cloud providers, the on-premises option is an ace in the hole for vendors offering that option.

Instead of hearing Benioffesque sound bites like "It's an amazing time in our industry, and it's an amazing time in the world," keynoters should have been hammering home the key points on freedom of choice and plentiful hybrid deployment options. People need reminding, too, that Microsoft customers can use the same system admin, monitoring, virtualization, and security and access control tools to deploy on-premises or in the Azure cloud.

Rave: Flaunt it if you've got it. Key announcements here included the impending [spring] release of Microsoft Dynamics Marketing, Microsoft Social Listening, and Unified Service Desk offerings that have smartly and quickly turned the MarketingPilot, NetBreeze, and Parature acquisitions into enviable feature sets that are well integrated with Dynamics CRM [and soon, other apps] in terms of user-interface consistency and process workflows.

Leads from Marketing get handed off to CRM and can be analyzed with familiar Microsoft BI reporting and analysis tools and interfaces. Social analysis can be done in the context of marketing, sales, or service, with Facebook and Twitter complaints channeled into the proper service channels. The Unified Service Desk brings together previously disparate support interfaces for contact-center reps, but with Parature's technology there also are plentiful new knowledge base and self-service options.

If you attended the deep dives you would have learned that the Microsoft Dynamics Marketing management and analysis capabilities extend to conventional TV, radio, print, live event, and telemarketing efforts as well as email, web, and social campaigns. And Microsoft Social Listening is done in five native languages whereas competitive systems typically translate to English first and then analyze, potentially losing nuances in translation. These are differentiators that should have been hammered home in keynotes.

Rant: Stop dragging your feet on ERP as a service. Microsoft says 9 out of 10 of its new CRM customers are choosing Microsoft Dynamics CRM Online (instead of on-premises deployments), so why the glacial progress toward delivering the flagship Dynamics AX ERP system as a multi-tenant service on Azure? Yes, CRM and ERP are very different applications and ERP is still overwhelmingly deployed on premises. But with SAP and Oracle now taking the likes of Workday and NetSuite very seriously, should Microsoft be keeping this AX move -- now promised in 2015 -- on the back burner? No.

Microsoft Business Solutions EVP Kirill Tatarinov told InformationWeek that he's expecting SaaS-based ERP to sell predominantly to midsized companies with less than $1 billion in revenue and 1,000 employees. But Workday has been consistently breaking those barriers for some time. AX as a multi-tenant service should have been part of this week's announcements. 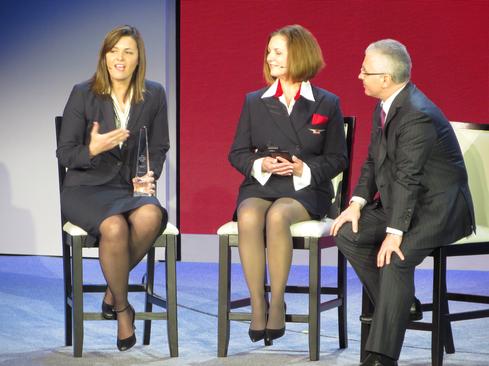 Rave: Take better advantage of the Microsoft stack. There were plenty of customers talking about their deployments here, and a consistent theme was taking advantage of everything Microsoft has to offer beyond the ERP and CRM apps. Delta Airlines, for example, is using Dynamics AX retail point-of-sale (POS) capabilities and Windows Phones to support in-flight purchases of food and beverages and, in a first, paid post-boarding seat upgrades, something that will really start paying dividends once it's rolled out on international flights, according to Darrell Haskin, Delta's director of IT.

Delta is able to make menu, pricing, and promotional changes and push them out to all 19,000-plus Windows Phone-equipped flight attendants "overnight," said Haskin. That's because Microsoft has end-to-end control from the POS application to the mobile devices. Changes used to take "weeks or months" on Delta's old POS system and purpose-built ruggedized devices, he said.

Other customers highlighted here -- Griffith Laboratories, Lotus F1, New Belgium Brewery -- pointed to the consistency and assurance of working with one vendor. "Dynamics AX is in our technical sweet spot because we're moving to the Microsoft stack, from the operating systems, to SharePoint, SQL Server, BI, Reporting Services, Analysis Services and so on," said Robert Kero, VP of Global IT at Griffith Labs.

In the world of enterprise apps there's SAP, there's Oracle, and then a rabble of cloud and second-tier legacy vendors. Salesforce.com and Workday are growing fast and have won tons of mindshare, but with everything Microsoft has going for it, it could and should be the third name on that list. It's time for this unit to go all in and seize the chance to replace a bunch of soon-to-be-retired software.

Doug Henschen is Executive Editor of InformationWeek, where he covers the intersection of enterprise applications with information management, business intelligence, big data and analytics. He previously served as editor in chief of Intelligent Enterprise, editor in chief of ... View Full Bio
We welcome your comments on this topic on our social media channels, or [contact us directly] with questions about the site.
Comment  |
Email This  |
Print  |
RSS
More Insights
Webcasts
Making XDR Work in Your Enterprise - May 12
How the Rapid Shift to Remote Work Impacted IT Complexity and Post-Pandemic Security Priorities
More Webcasts
White Papers
Ransomware Security Breach Summary: Food Production
Global software company contracts with CBTS for Virtual CISO
More White Papers
Reports
Enabling Enterprise Resiliency Through Cyberthreat Detection
Intelligent Outcomes Are Key to Business Resilience
More Reports

To put the cloud customer adoption in perspective, Salesforce.com (a $3 billion business) grew around 30% in 2013. Workday, a much smaller ($470 million) business grew around 70% in 2013. Kirill Tatarinov said the Microsoft Dynamics business grew 10% overall in 2013. He pointed out that AX grew 30% in North America and that Dynamics CRM has had 38 consecutive quarters of "strong, double-digit growth," with 9 out of 10 new customers choosing CRM Online. All those stats reinforce the arguement that Microsoft should be moving to multi-tenant ERP services sooner rather than later. But the die is cast and would-be customers will have to wait until 2015. NetSuite (a more direct AX competitor than Workday) is ready today.
Reply  |  Post Message  |  Messages List  |  Start a Board
InformationWeek Is Getting an Upgrade!