A Federal Trade Commission lawsuit now before the federal courts, alleging that the Wyndham hotel chain failed to make reasonable efforts to protect consumer information, offers a cautionary tale to all executives. The concern: How do companies decide what constitutes "reasonable protections" of sensitive data -- and how do they know if they're meeting that standard?

The lawsuit promises to bring attention and context to a set of voluntary national cybersecurity guidelines released in February by the National Institute of Standards and Technology (NIST), designed to help executives address those questions, as InformationWeek Government contributing writer William Jackson reports this week.

The case against Wyndham Worldwide and three subsidiaries involves the theft of hundreds of thousands of consumer debit- and credit-card numbers, after hackers allegedly broke into Wyndham's corporate computer system and systems of several individual hotels from 2008 to early 2010. (This theft pales in comparison to the massive breach of Target's point of sale systems late last year, which affected as many as 70 million customers.) The case is as much about whether the Federal Trade Commission has the authority to police Wyndham as it is about the company's security practices.

In her April 7 decision to let the case proceed, US District Judge Esther Salas ruled that the FTC indeed has the power to regulate corporate data-security practices -- and made it clear that executives had better take their companies' data-security precautions more seriously.

But what constitutes reasonable protections and the role the new federal cybersecurity framework might play? Although protecting consumer data and the nation's critical-infrastructure facilities might seem to be two different endeavors, they share a common need to assess and protect against risks.

Back in December 2008, around the time hackers were finding their way into Wyndham's computer systems, former Defense Information Systems Agency director Harry D. Raduege and a federal commission filled with security experts delivered a report to President Obama that laid bare how vulnerable the nation's privately held critical-infrastructure systems were to cyberattacks. 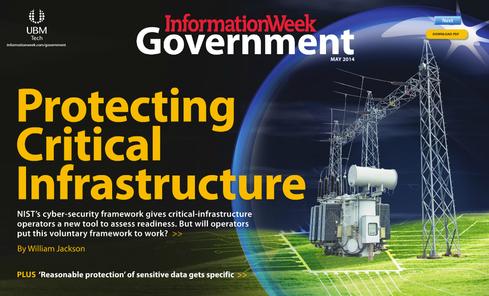 Some industries were deemed better prepared than others. Companies in charge of the nation's energy and water supplies, those operating communications and transportation networks, and those in a dozen other industries, including healthcare and banking, were said to be ill-prepared to protect their operations from increasingly sophisticated cyber-attacks. The risk of economic catastrophe loomed large. Moreover, there existed no clear baseline across all those industries to establish a set of protections.

For better or worse, Congress has been unable to agree on a legislative remedy, leading President Obama to issue an executive order last May calling for industry leaders and NIST to hammer out a set of cybersecurity best-practices, resulting in the framework NIST released for infrastructure operators in February.

The guidelines give industry executives something their counterparts at Wyndham probably wish they had: a template for assessing their security

One of the most common causes of data getting in the wrong hands is the loss of mobile devices that often contain a frightening amount of private information. I want to share a protection option that worked for me. Tracer tags (mystufflostandfound.com) let someone who finds your lost stuff contact you directly without exposing your private information.  I use them on almost everything I take when I travel like my phone, passport and luggage after one of the tags was responsible for getting my lost laptop returned to me in Rome one time.
Reply  |  Post Message  |  Messages List  |  Start a Board

One of the big challenge that remains is determining when and whether companies are legally at fault when data is breached -- as it inevitably will be -- and how to assess the penalties.  One of the things the cyber securitiy framework does, at least, is establish a minimum security measures across industries on which to build a case for critical infrastructure protection.  We still need a comparable document for consumer data protection.
Reply  |  Post Message  |  Messages List  |  Start a Board


Thanks for the comment. I think I was a bit inarticulate. I don't want the government to set the requirements for how to protect the data, because you're right, technology changes faster than the government can keep up with.

Thanks for weighing in on this Drew.  I think you half-right: Government should set penalties for failure to protect data.  But I believe -- and that most in industry believe -- that Government shouldn't be in the business of setting "rules that mandate the protection of customer data" as you suggest, in part, because history has shown that rules fail to keep up with the rapid changes in technology (and the products/services that evolve from them.)  I do agree, focus on the outcomes, not compliance, is the better way to go.
Reply  |  Post Message  |  Messages List  |  Start a Board

Exactly, but the key is to make the penalties have teeth. We've all heard about HC firms that would rather pay HIPAA fines, if they ever are caught, because the fines cost significantly less than being compliant. The penalty should be a percentage of company earnings so that the amount scales and dings large and small equally, plus mandates to offer credit monitoring services.
Reply  |  Post Message  |  Messages List  |  Start a Board

PCI was very much on my mind when I was writing that response.
Reply  |  Post Message  |  Messages List  |  Start a Board

Drew, I'm sure you're thinking what I'm thinking: Telling companies HOW to reach an outcome rather than punishing them for not reaching the desired outcome smacks of PCI, which has become a dance around the auditors.
Reply  |  Post Message  |  Messages List  |  Start a Board

I think it's useful to have organizations like NIST provide guidelines that companies can use, but I'd rather have the federal government provide very clear rules that mandate the protection of customer data, and the potential penalities for failure (fines, lawsuits, etc) instead of trying to tell companies how to protect customer data. You can mandate all the security requirements you want: organizations will still get breached. Rather than make companies jump through regulatory hoops to demonstrate compliance, set clear penalties for failure and then organizations put their efforts into protection and response rather than trying to play "find the loophole" or "satisfy the auditor."
Reply  |  Post Message  |  Messages List  |  Start a Board
Editors' Choice
Hot Topics